Futuremark’s Peacekeeper, another product that happens to have nothing to do with “peacekeeping”, but at the least its application is not as ironic as other products that have used the name; such as the LGM-118 peacekeeper, which is an intercontinental ballistic missile designed to destroy nations; rather than a multinational military force sent to restore the rule of law and protect civilians. On the other hand it does have a neat logo, and the name Peacekeeper seems competitive with the names of other benches such as Sun’s Spider or Mozilla’s Kraken.

In any case, Peacekeeper is Futuremark’s browser performance benchmark. It tests for prowess in a number of different areas ranging from HTML 5 video codec support to in browser 3D rendering. But the biggest feature Peacekeeper has to offer is universal browser support. 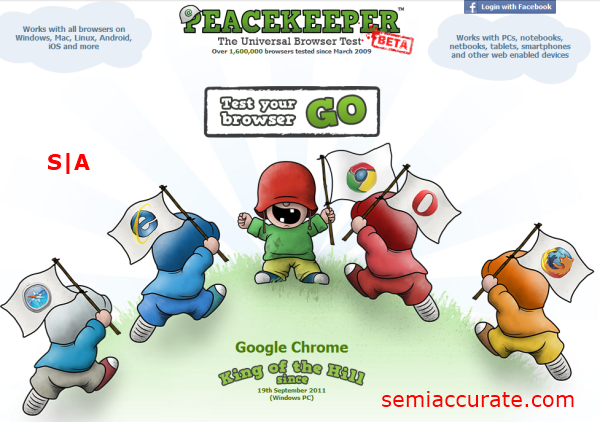 This is why you’ll see interesting results for non-PC devices when looking at your own results. For example Samsung’s Galaxy S scores 275 while my review platform scores 2988. While the difference there is an order of magnitude in favor of the PC platform it’s still entertaining to have the capability to compare a smart phone to my desktop.

Speaking of which, I noticed a significant degree of variability in the benchmark results depending on your system’s configuration. I used the same browser and did three runs, one where I was fixated on the run the entire time, one where I was taking screen shots and editing images while it was benching in the background, and one where I was watching it for the final stages of benchmarking.

The results, as you can see, show that Peacekeeper is sensitive to more than just your platform or your browser.

One notable issue that came up in my brief testing session with Peacekeeper was a pair of plug-in crashes while running the benchmark. The Skype Toolbars plug-in for Chrome crashed all three times while I ran the benchmark. Although in Peacekeeper’s defense I have had that plug-in crash on other occasions without taxing my system. So that issue probably has more to do with Skype and Chrome not playing nice, rather than Peacekeeper meddling with Chrome’s plug-ins.

The version of Futuremark’s Peacekeeper that we at S|A are looking at is the current beta that you’ll find here, in the form of an in-window pop-up, at Peacekeeper’s home page. So how do we rate Peacekeeper? Well, based on its sensitivity, variety of tests, focus on HTML 5 support, and multi-platform support I’d have to say that it’s one of the better browser benchmarks I’ve seen. The UI is palatable, and the cartoonish king-of-the-hill art style is rather refreshing in comparison to some of the more drab looking benchmarks out there. 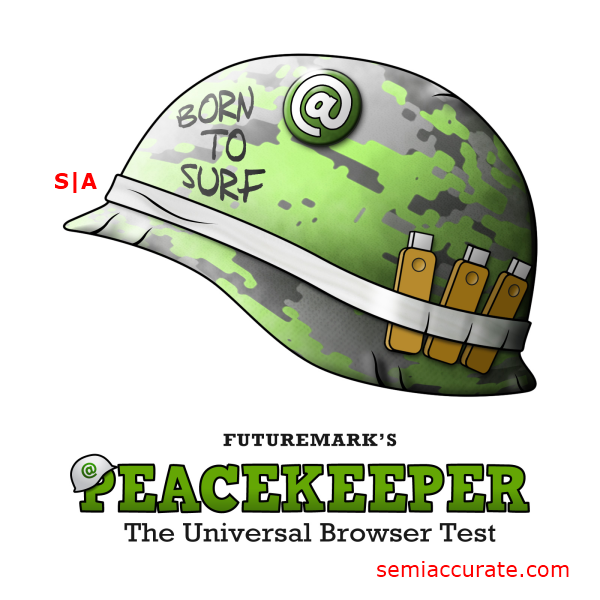 Good on the crew at Futuremark for creating a benchmark that’s easy to use while still being sensitive to the platform your running it on and relevant to the seesaw of the browser wars.S|A