Stock In The Channel: January 2012

With the recent launch of AMD’s new single GPU flagship, the HD 7970, in mind we decided to check back in at the popular US online retailer Newegg.com to see what availability was like. Unsurprisingly, all of the nine SKUs Newegg has listed are out of stock. Prices on these SKUs start at AMD’s supplied MSRP of $549 and go up from there. The XFX Black Edition version of the HD 7970 takes the crown for the most expensive SKU listed at a cool $599. 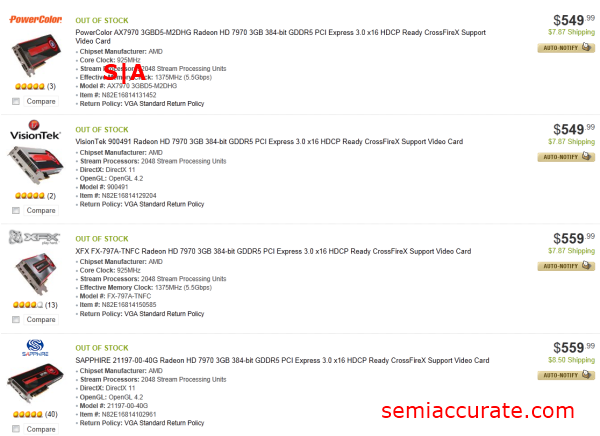 Hopefully the situation will improve when, if the rumors are correct, the HD 7950 launches in February. We’re going to skip the pie charts this month, as the differences between the data we gathered last month and what we’ve found this month are nearly non-existent. We’ll bring them back at a later point in time though.

Now let’s turn to the HD 6990. Last time we checked this card was in short supply and going in and out of stock depending on when you checked Newegg’s listings. This month things seem to have stabilised to some degree. Of the two listed SKUs one of them is actually in stock. The most likely catalysts (pun intended) for this change is the shift in high-end demand from the HD 6990 to the new HD 7970.

Now for the small mystery that is the disappearance of the GTX 590. 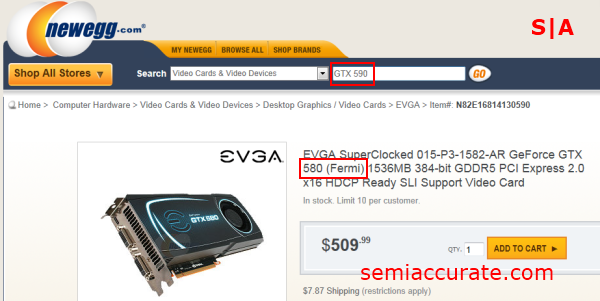 Multiple checks at Newegg have revealed no active GTX 590 SKUs as of the time of publishing. If you enter “GTX 590” into Newegg’s search bar it redirects you to a GTX 580 SKU from EVGA. And if you were to search the page for any reference to the GTX 590, using the Ctrl + F method, you would be sorely disappointed.

I was hoping to find that Newegg’s complete lack of GTX 590s was an isolated incident, but a check at Tigerdirect.com also came up empty for GTX 590s. Amazon.com fared slightly better than its two competitors with a single GTX 590 SKU listed, and in stock. 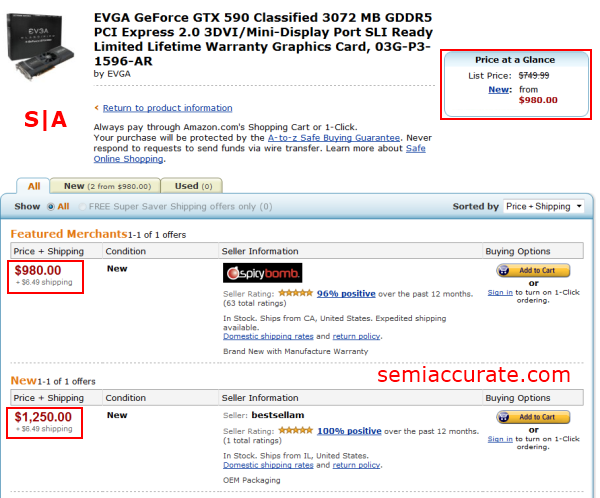 Take a second to look at those prices… What was the MSRP on the GTX 590 at launch again? $699. At this point it looks as if Nvidia and its partners have pulled the plug this particular product. As to the why of the matter, the decision could have been made because of the smaller margins the GTX 590 offered over the GTX 580 or because of a lack of demand in the face of the HD 7970, or an imminent launch. Whatever the reasoning, the GTX 590 seems to have disappeared quietly.S|A

Editor’s note: The author has noted that since the story has been published the stock option on the 7970 has changed from in-stock to out-of-stock more than once.  We will not speculate upon their real-time database or if it’s the squirrels inability to carry the cards up from the basement fast enough!