Yesterday our favorite niche graphics company, Lucid Logix, released a new piece of software designed to specifically to make Skyrim playable at reasonable quality settings on Intel’s Core-i5 based Ultrabooks. Lucid calls this product DynamiX. I’m sure that most of you are familiar with the notion that as you increase the output resolution of a video game, the number of frames per second that your system is able to produce decreases. Well, with this in mind Lucid set about developing what it calls real-time dynamic resolution scaling.

Basically what Lucid’s DynamiX is doing is changing the in game resolution of Skyrim based on the number of frames per second that your system can muster. Let’s say that in some sections of the game your Ultrabook can render the hills and forests at about 30 frames a second, but when a Dragon shows up your system’s frame rates start chugging down to 10 or 15 frames a second. DynamiX aims to alleviate this problem by lowering the in game resolution that Skyrim is rendering at, when running the game at higher settings would make it unplayable. This allows you to get enough frames out of your system to keep it playable, while at the same time not limiting you to poor quality settings and a low resolution at all times. As a concept DynamiX is most certainly a great idea.

With this knowledge in mind we decide to try out the DynamiX beta, which works only with Skyrim. First we tried running the application on a desktop, to no avail.  The application wouldn’t actually install, but it did give us this nice message.

Then we scrounged around the orbital lab for an Ultrabook that we might be able to properly test is on. Unfortunately, it looks like a certain group of interlopers have appropriated the samples that were floating around. But we did try and give it a go with our trusty Brazos based laptop. 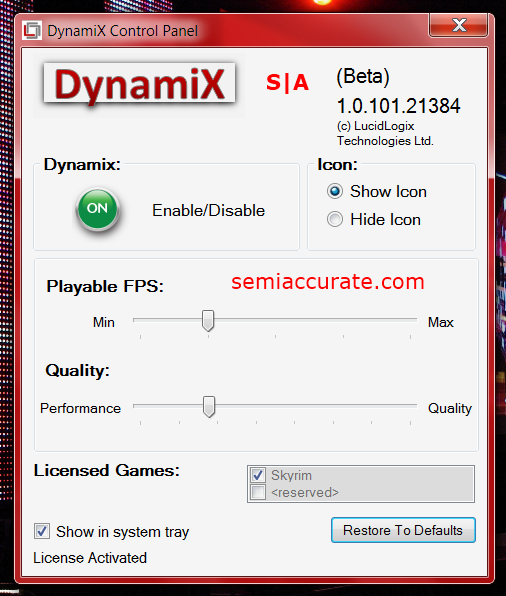 This is the DynamiX control panel. The configuration options are pretty straight forward. They allow you to choose between quality and frame rate, as well as enabling or disabling the application. It also includes the ability to reset to a default mode that positions the sliders in the manner shown in the screen shot. Next we broke out Fraps and did some benchmarking. 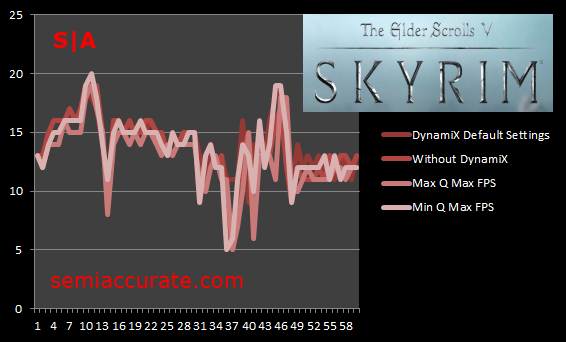 Needless to say the only thing we can really take away from these benchmarks is that DynamiX is incompatible with Brazos, and that when they say Core-i5 based Ultrabook, they mean it.

What’s far more interesting is the image quality of some of the screen shots we took while playing around in Skyrim. 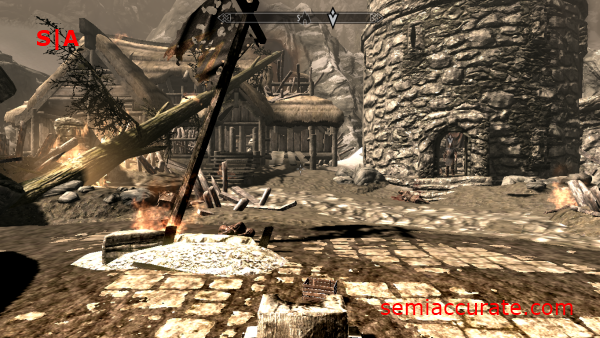 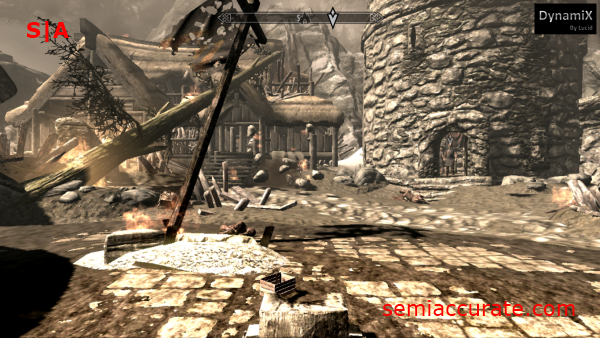 As you may have already inferred, image quality does take a hit when DynamiX is actively scaling Skyrim’s resolution. While this resolution scaling didn’t bring us any extra performance in our limited and improper testing, it’s reasonable to assume that DynamiX would be more effective on an Ultrabook. All in all, DynamiX is a very interesting product. As a concept, it has a lot of potential for making systems with severely limited graphical resources a more palatable option for casual gaming applications. Admittedly, DynamiX’s first public incarnation, in the form of this beta, is a tepid step toward the promise that Lucid’s dynamic resolution scaling technology offers. But you’ve got to start some where, and DynamiX is without a doubt an interesting proof of concept.S|A

Updated: March 23, 2012 9:33PM.  Editor screwed up on the spelling of the new-to-us marketing term “DynamiX “.  All should carry the proper spelling now.  If we missed any corrections please email editor @ sitename.com.