Intel is now well on its way to completing the roll-out of its new 7 -series chipsets. Today we’re taking a look at what Gigabyte is bringing to the table with its new line-up of business oriented mid-range motherboards. Intel is segmenting its business offerings into two main categories; those with vPro support and those with Intel’s Small Business Advantage software. The four motherboards from Gigabyte that we’ll be profiling later on in this article are of the latter group.

So what is Intel’s B75 chipset? Well in its simplest form it’s a cut-down version of Intel’s Z77 that’s aimed squarely at small businesses. Now this is the same formula for success that we’ve heard many times before, but this time Intel has decided to freshen things up a bit with its complementary Small Business Advantage software that can be used to manage groups of up to a hundred computers based of off this chipset. So from the Intel side of the equation we have all of the value add-ins like Rapid Start and Anti-Theft technology that a 7-Series based platform brings to the table, plus Intel’s management software to keep things moving along smoothly. 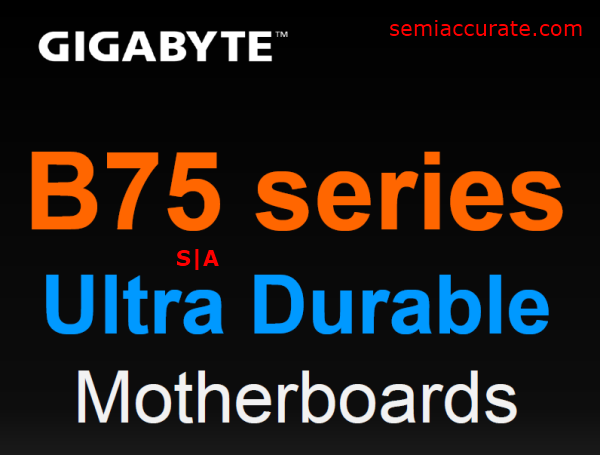 Turning away from Intel for a moment and looking towards Gigabyte we can see that they are attempting to differentiate themselves from the rest of the pack by incorporating their Ultra Durable 4 Classic technologies into these new offerings. 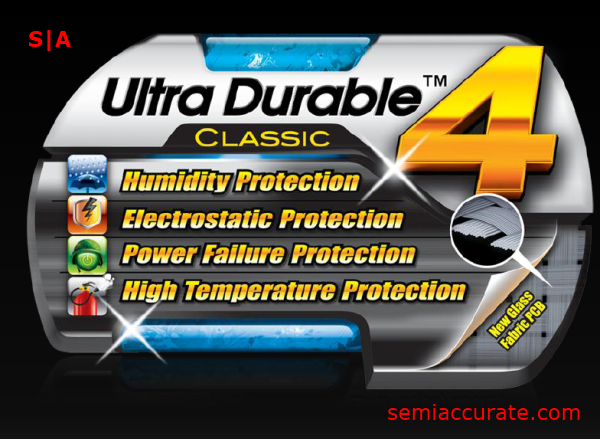 As Gigabyte has so prominently displayed in the side above, there are four main benefits that fall under the umbrella of their Ultra Durable 4 Classic banner. 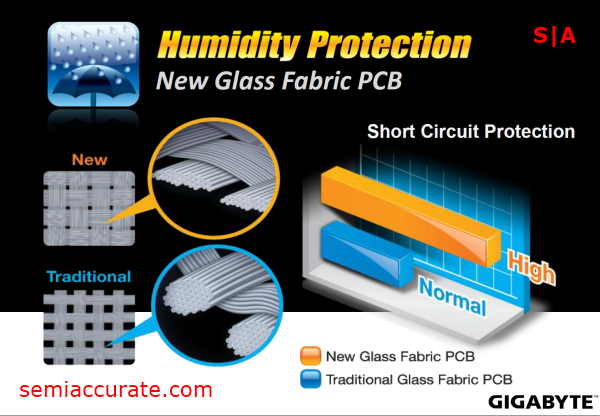 The first of these tenets is improved Humidity Protection enabled by Gigabyte’s new glass fabric PCB. Gigabyte has redesigned the weave of the glass fibers in their motherboard PCBs. By switching from a traditional glass fabric PCB, Gigabyte has achieved improved resistance to the negative effects of high humidity environments, like an increased chance of having a short circuit damage a motherboard. 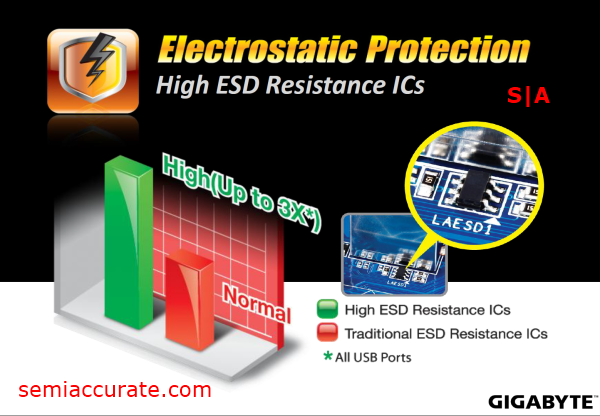 Moving to the second tenet we can see that Gigabyte has taken it upon itself to try and ease our fears of accidentally frying a motherboard by inadvertently zapping it with a discharge of static electricity. Having watched a friend destroy a new motherboard this way, I can definitively say that its not a mistake that you should wish upon anyone. 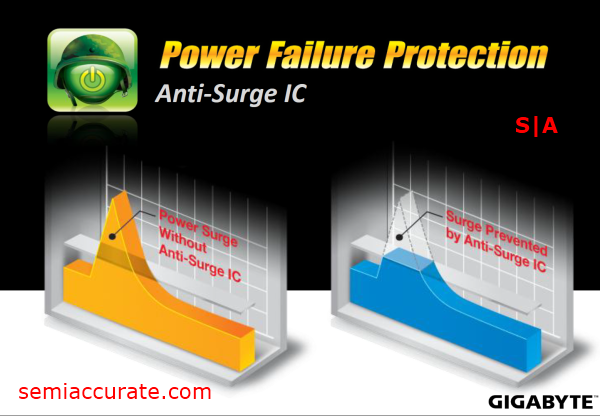 In addition to static protection Gigabyte is also offering added protection against power surges. <sarcasm> Although I doubt any of you are without the proper anti-surge power bar between your computer and your local power outlet. </sarcasm> 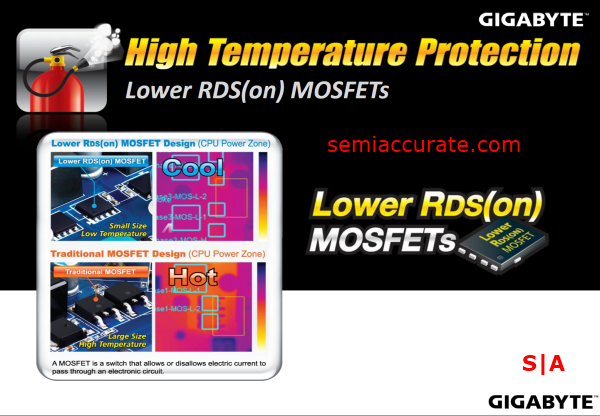 And here we are at the last of Gigabyte’s four Ultra Durable tenets, high temperature protection. In this case Gigabyte has opted to replace its traditional MOSFET design with a newer design that is both physically smaller and cooler than what they were using before. So hopefully this design will reduce the need for dedicated power circuitry cooling, which often makes mounting large heatsinks more difficult. 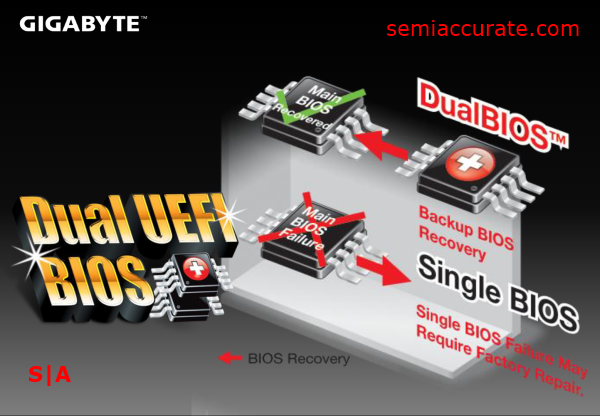 I should also mention that Gigabyte is continuing to offer its dual BIOS feature which has been around for sometime now.

So that’s the long story of  what Gigabyte’s Ultra Durable 4 Classic feature set brings to the table. With that high-level overview in mind I took a particular interest in the new glass fabric weave that is part of these new motherboards and asked Gigabyte for some further explanation of this rather novel idea. They provided this explanation.

“We use a new fiber glass material that features a flat weave rather than circular weave design. The effect is that there are much smaller gaps between the fiber weaves. With a traditional circular design, when we milled holes into the board (for example mounting holes), the gaps between the fibers could be widened, leading to moisture travelling into the different PCB layers through these holes. This can actually short the board if the moisture hits a trace path. With the new design, the gaps between the fibers are smaller, so there is a reduced chance for water to get through. We actually did a lot of research on this for several years. We noticed that certain regions such as India, Vietnam, etc. were having higher than normal RMA rates due to boards shorting out. What these countries all had in common was very humid climates. Once we moved to the new design, our RMA rates dropped noticeably.”

So it looks like the new weave benefits both end users and Gigabyte’s bottom line.

Now back to the Intel side of the equation for a moment. These motherboards are all part of the tier below Intel’s vPro market segmentation. This means that while you don’t get scalability or features that vPro offers you do get a few key things like Intel’s Small Business Advantage software suite. Now you may have noticed that I’ve used a decidedly different tone when covering this technology than that of S|A’s own Charlie Demerjian. This is because Charlie has already dug up most of the skeletons in that particular closet. Instead I’m more interested in the additional functionally that these technologies bring to the table rather than their less-than-transparent underpinnings. As such, we’ll be bringing you some more hands on testing with this software in a later article. 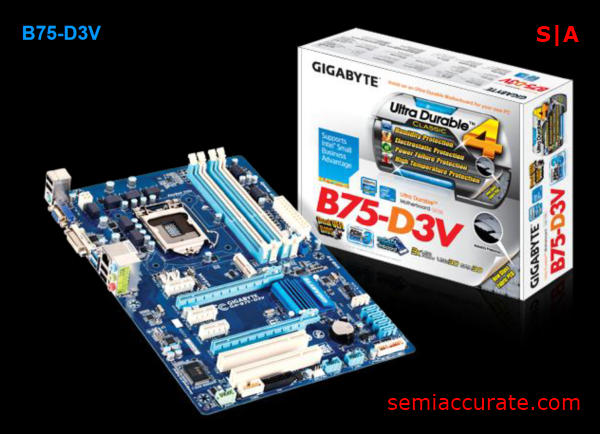 The D3V is the highest end offering in this segment of Gigabyte’s lineup. It’s a pretty standard ATX motherboard with a layout optimized for a Crossfire graphics solution and uses Gigabyte’s classic blue and white color scheme. It also sports an mSATA slot near the center of the board. 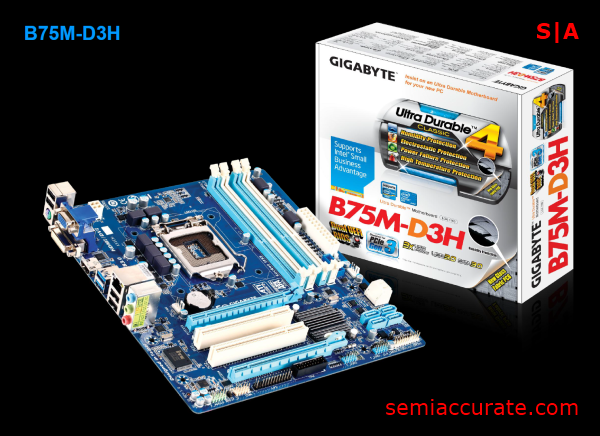 Moving down the line, we have in the M-D3H what amounts to a mATX version of the D3V. Again, Gigabyte has used a layout optimized for a Crossfire based graphics solution. 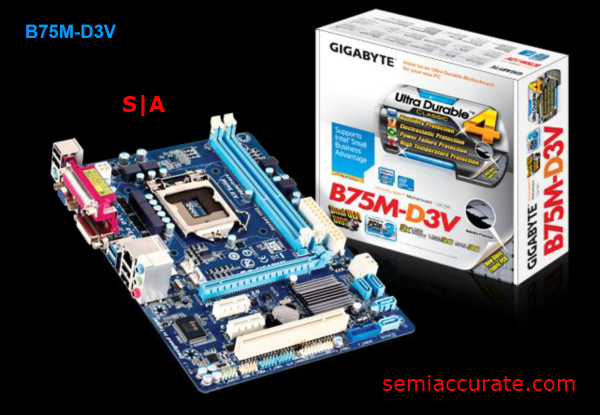 The M-D3V foregoes a second physical PCI-E X16 slot while maintaining a mATX form-factor and offers only a single pair of DDR3 memory slots. Additionally, it brings a parallel port into action, which is presumably for legacy hardware. 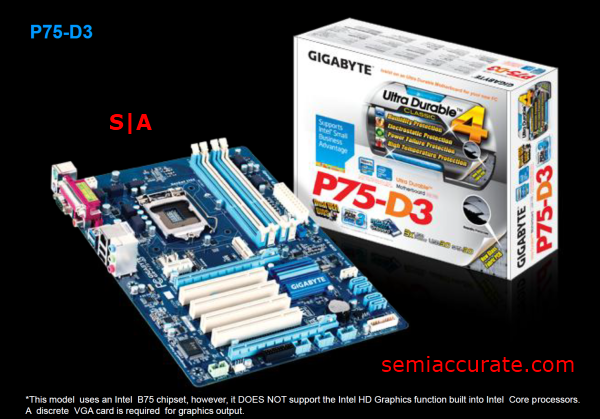 And last, but not least, the P75-D3 moves back to a full ATX form-factor with an mSATA slot, while dropping support for Intel’s integrated graphics. It also offers a second physical PCI-E X16 slot and what appears to be a serial port as well as a parallel port.

As far as pricing goes Gigabyte’s has placed these offerings at price points around $80.

So for about $80 you can have your choice of mid-range business oriented motherboards from Gigabyte. With reasonable pricing and the Ultra Durable 4 Classic  feature set, it seems that Gigabyte has assembled a rather tantalizing value proposition with its B75 based line-up. Now the only question marks left are hovering over performance and Intel’s Small Business Advantage software. These are two items that we’re aiming to answer in an upcoming article.

If you’re looking to update your small business’s PC infrastructure to a managed model, or if you’re just looking for a good all-around $80 motherboard, you’d be wise keep any of Gigabyte’s B75 Series motherboards on your radar.S|A