In addition to it’s already available value, entertainment, and performance series memory offerings AMD is rolling out another, even higher performance, tier of memory today called the gamer series. With default clock speeds of 2133 Mhz, 30mm low-profile construction, and 4 GB DIMMs AMD’s Gamer Series memory is a competent, if initially unremarkable, high-end memory offering. Where AMD aims to differentiate itself from the competition is with its AMD Memory Profile (AMP) Technology. Much like Intel’s eXtreme Memory Profiles (XMP), AMP profiles are manufacture defined memory settings that decrease latency and increase bandwidth. 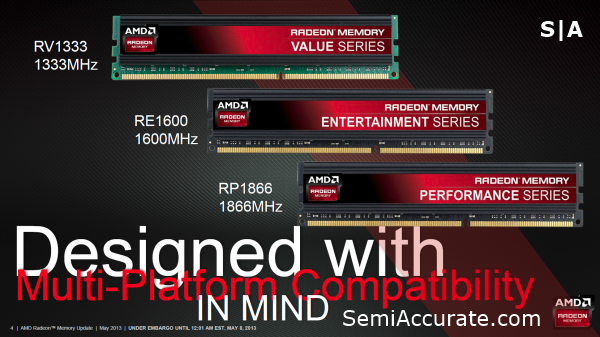 AMD’s Gamer series memory is binned at the factory for overclocking ability. AMD’s team has spent a lot of time testing to make sure that this RAM is compatible with as wide an array of AMD and Intel platforms. The value proposition here is that you are purchasing what is more or less run-of-the-mill RAM that has pre-tuned overclocking profiles for latency, bandwidth, and power consumption. Of course the downside here is that on Intel platforms you won’t have access to some of these profiles, rather you will only be able to use the XMP settings which are generally more conservative. 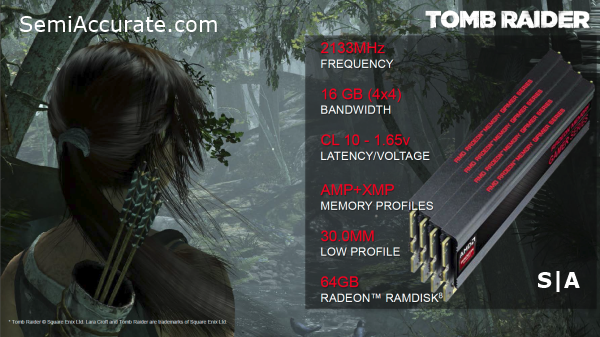 If we look at this from a bundling perspective AMD seems to be getting surprisingly close to offering all of the core components needed for a DIY computer build. They offer CPUs, Graphics Cards, Memory, and Motherboard Chipsets. The only major item that they are missing is Radeon-branded SSDs and power supplies. 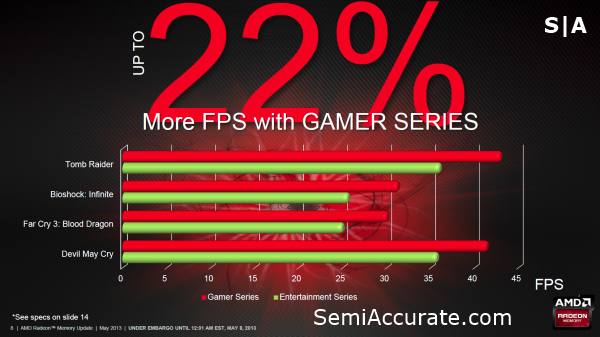 Since 2010 there hasn’t been much of a practical advantage to buying memory speeds faster than 1600 MHz; numerous reviews have shown the gains to be minimal for CPU bound tasks or systems with a discrete graphics card. But there is one place that increasing memory speed has a measurable effect on performance and its AMD’s biggest strength, APU bound graphics performance. By AMD’s own count, moving to 2133 Mhz memory from 1600 Mhz memory results in a 22 percent average increase in frame rates across four of AMD’s Gaming Evolved titles. This is probably a best case scenario, but there is certainly performance gains to be had from using high-speed RAM on APU based systems. 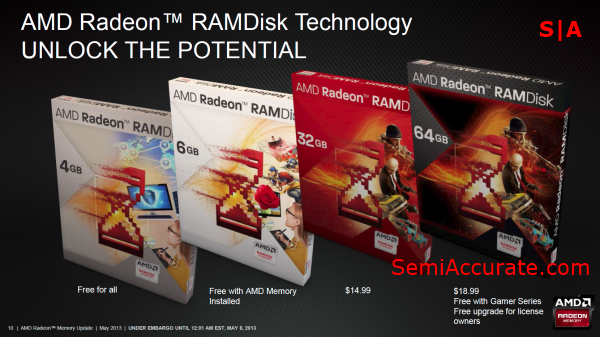 AMD is giving us more details today on its Radeon RAMDisk software that comes bundled with its new Gamer Series Memory. There are four tiers to this product, a free tier that enables RAMDisks up to 4 GB in size, 6 GB tier that come free with any AMD Memory purchase, a $15 tier that offers 32 GB RAMDisks, and a 64 GB tier that comes free with Gamer Series RAM and costs $19 to purchase on its own. AMD’s RAMDisks effort is really just to add value for consumers thinking of buying AMD Memory. It’s not technology developed by AMD, but it does provide a tangible benefit to consumers who need a high bandwidth scratch disk. It’s really for people doing photo or video editing as opposed to people who just want to surf the internet or play games. 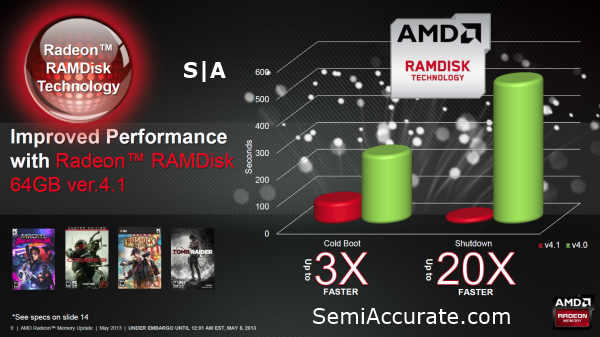 The old version of Radeon RAMDisk had a negative impact on start-up and shut down times. But with the move from v4.0 to v4.1 this issue is gone thanks to what AMD calls enhanced load and store. Better yet the program is now capable of updating without interrupting the service that it provides.

By far the most interesting thing we learned from AMD’s presentation was that all of its memory products, including the RAMDisk software, are being produced by Dataram. What’s even more interesting is that rather than AMD rebadging Dataram’s products for sale, Dataram has licensed AMD’s Radeon brand. This would lead us to believe that as part of the licensing deal AMD is taking care of the product marketing and taking a small cut from every sale of Radeon branded RAM that Dataram sells.

If you were hoping that AMD would release higher speed DDR3 solutions with even better XMP profiles then today is your lucky day because that’s just what they’ve done. AMD expects Gamer series memory to be available from Newegg by the end of next week.S|A