Hands down it beats Intel’s WiDi by a mile…

Stashed away at a booth in the experience zone of AMD’s Developer Conference was a demo of the company’s wireless display technology. AMD’s Daryl Sartain was happy to give us a complete run down of the solution that AMD’s cooked up. There are three big concerns with any wireless display implementation: latency, system overhead, and ease of use. AMD has nailed all three of these items and video games are actually playable to boot.

Of course it’s not perfect and if you’re looking for it you can detect the input latency, but the key here is that you can actually stream games from your laptop and watch them on your television while you game. Latency is still a bit of a problem because even in a best case scenario there is a constant variable time of between 50 to 30ms from when the game is rendered and when it’s shown on your wirelessly connected display.  But as it turns out most of that latency is not AMD’s fault, rather the weakest points of current generation of wireless display technologies is the wide array of Miracast adapters themselves and the Windows 8 networking stack. 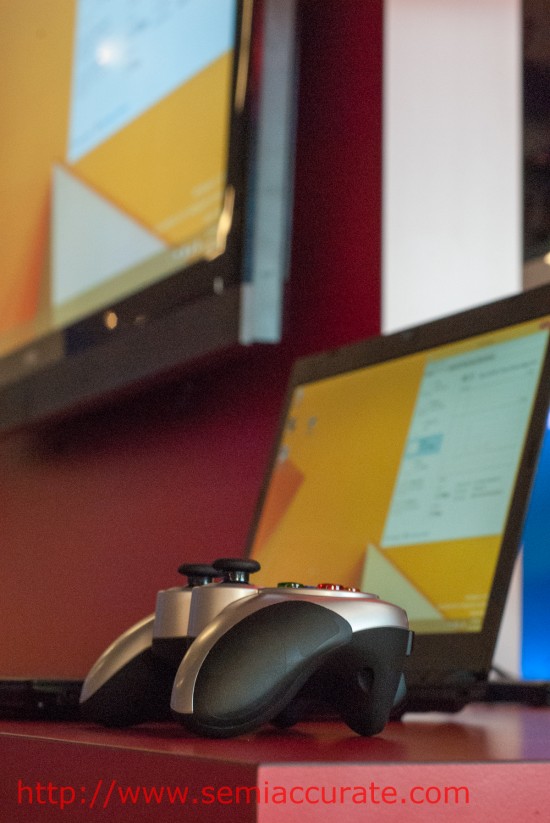 AMD’s taken an interesting tact in dealing with its wireless display implementation by effectively tricking Windows into believing that the wireless display it’s connected to is actually a physically connected display like Windows is designed to deal with. The advantage of this method is that AMD’s drivers can control and modify the video going out on that stream just like it can for standard displays. So the overscan, underscan, and color temperature controls in Catalyst work just like they would on any other display. 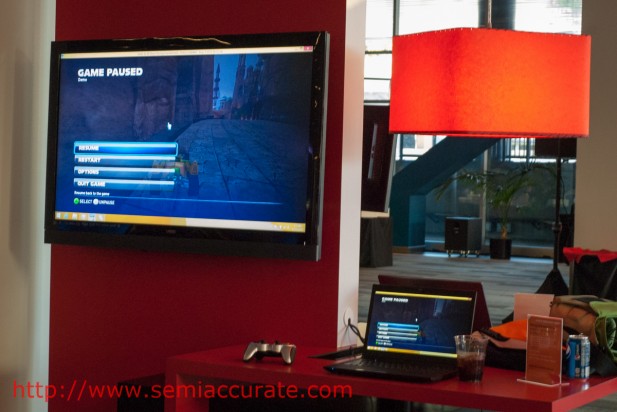 Now AMD’s wireless display implementation is superior to Intel’s for one major reason: fixed function hardware. Intel’s uses the power of its integrated GPU to assemble and compress the video feed that it’s sending over WiFi direct to your Miracast enabled device. AMD has fixed function hardware for doing video encode and compression as part of its graphics architecture which allows the company to spend the GPU’s time rendering the game rather than preparing the video stream to go out to the display. The benefit of this is that the performance hit from AMD’s wireless display implementation is only about three percent compared to the same game running on your system’s native display. 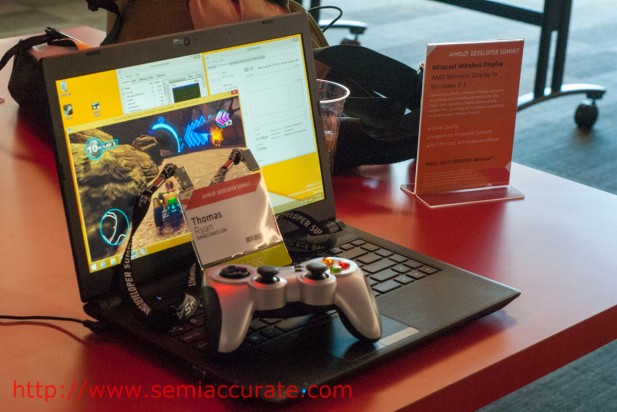 AMD’s wireless display is also really flexible from a wireless frequency standpoint as it can broadcast over both the 2.4 Ghz and 5 Ghz wireless bands, unlike Intel’s solution which is 5 Ghz only. Unfortunately though, AMD’s wireless display is a Windows 8/8.1 only technology. There will be no Linux support, and while Windows 7 support was in the cards at one point, the Miracast dongle vendors don’t support the old OS and so AMD can’t either.

That whole saga not-with-standing AMD’s Wireless Display is very real, or at least as real as the rest of the wireless display market is. Games are playable, in our case we played a racing game, and we were told specifically that first person shooters like Call of Duty are playable using AMD’s wireless display.

But comparing AMD’s implementation to what Intel has managed isn’t even really fair because of the hardware disadvantage that Intel’s working from. The average latency of Intel’s solution is said to be about 170 to 150ms which is about three times greater than AMD’s solution and because Intel is relying on its GPU to do the grunt work for the video stream and to render the game, there is a big performance hit.

If you want to connect to your television through Miracast AMD’s solution is clearly better than what Intel can offer you. At the same time though you should be feeling a little silly right now considering how cheap HDMI cables are and how easily using a wired connection resolves the latency problems that wireless display solutions will always be susceptible to. But if your laptop has to have usable wireless display functionality then you have to grab something with one of AMD’s A-series APUs in it, full stop.S|A