When will the 290 partner boards arrive?

Christmas presents are on their way for GPU noise fanatics…

The reference cooler on AMD’s R9 290 and 290X has taken a lot of heat (easy pun intended) since the cards debuted over the last month. We did a bit of asking around and stumbled onto quite a few interesting details about AMD’s channel presence. First off there won’t be a repeat of the 290’s cooler. AMD has learned from this incident and the word on the street is that the cooling engineers at AMD are a little more in touch with what reviewers and consumers alike expect from a $550 GPU.

Checks with AMD’s partners revealed that the AIBs are hard at work preparing their own versions of AMD’s R9 290(X) cards with new PCB designs and aggressive aftermarket coolers.  With CES approaching quickly the AIB partners are rushing to have their own versions ready for the show at the latest. On the other end of the spectrum we heard a few people mention “before Christmas” as the due date for non-reference design from AMD’s partners. Either way we don’t have too long to wait for a Christmas present from AMD’s partners. 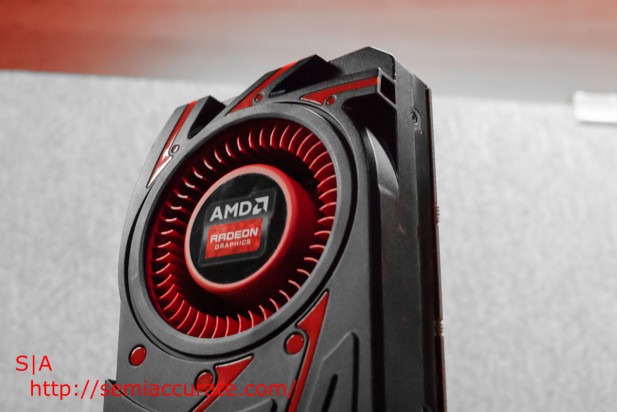 The other detail we picked up on was the mutterings of a few lost souls claiming that Nvidia’s GTX 780/Ti/TITAN cooler has a BoM cost approaching $150. While AMD is going to put more of a focus on limiting the noise output of future cooling solutions it’s unlikely that we’ll ever see a brushed aluminum TITAN-style cooling solution from the red team. AMD wants to meet the expectations of the market, but it’s not interested in putting itself in the poor house to do so. That said AMD seems to have a knack for starting GPU price wars which is something that a high BoM cost often prevents.

Tom’s Hardware had an article on using a DIY aftermarket cooling solution to quiet their R9 290 sample. In terms of cooling performance and noise reduction the aftermarket GPU cooler was a very effective solution. But the flaw in this DIY fix is that by swapping out the stock heatsink you void the warranty on your graphics card.

In our checks with partners we learned that the aftermarket GPU air cooling business is a very small and unprofitable slice of the market. Multiple vendors told us that they’d done significant research on entering that market, but that their focus groups consistently told them that they would not under any circumstance willingly void their graphics card’s warranty. Even if that means they could get higher overclocks or significantly better cooling performance. 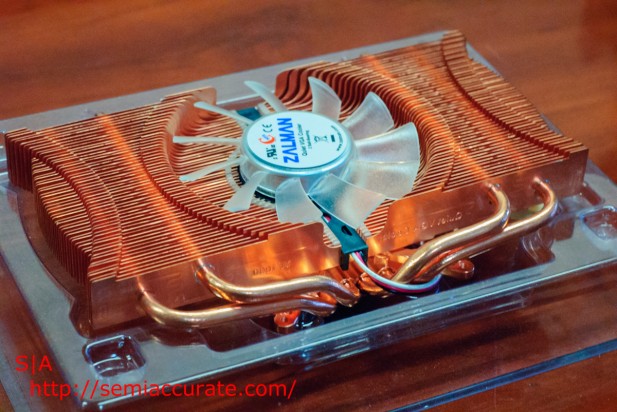 While there are a few companies that offer products for that market, don’t expect to see any new entrants spurred into the aftermarket GPU cooling segment by the discontent surrounding the R9 290(X) reference cooler. On the other hand, for those willing to void their warranties using a closed loop water cooling solution on their GPU(s) is an up and coming segment apparently. Don’t be surprised to see more GPU adapter kits for closed loop CPU water coolers in the near future.

On a lighter note AMD’s motherboard partners seemed up-beat about the market performance of the company’s CPU and APU offerings in the channel. There’s been a slow but consistent recovery in demand for AMD-based motherboards since the large dip that occurred when AMD was having trouble supplying the channel during the Llano era.

With Kaveri coming at the beginning of the new year AMD’s partners seem well prepared with a slew of Socket FM2+ A88 series motherboards available for purchase now. On the AM3+ front don’t expect any new updates in addition to the existing selection of motherboards on the market. The partners think they’ve tapped out all of the potential motherboard configurations for AMD FX-based systems.

So by and large it’s steady as she goes for AMD’s partners as we head towards CES. They’re hard at work on non-reference 290(x) designs and AMD seems to be treating them pretty well across the board. Kaveri may not be chip we’d been expecting, but AMD’s definitely on the up and up with its channel partners; so expecting the company to perform well in that segment through the first half of year would be a safe bet.S|A