Making a Sandwich out of Intel’s Skylake 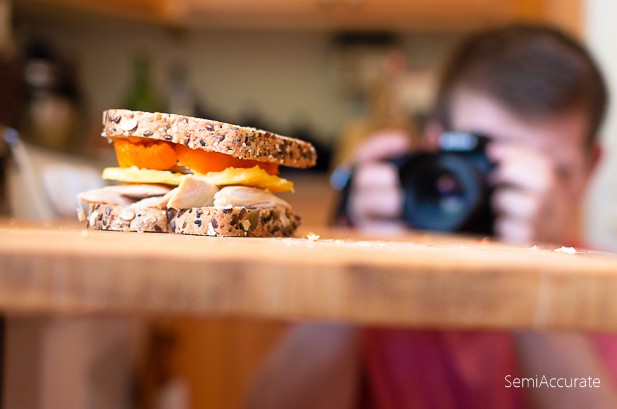 There’s been a lot of talk over the past two weeks about the first Skylake chips to hit the desktop. Intel has remained rather coy about what is at the core of its new Skylake architecture but they did send us a chip, so there’s that. Telling you how and where Skylake outperforms Haswell is all well and good, but what you really want to know is why. We can’t tell you that, so instead we’ve made a sandwich. For you: our dear readers.

The first thing we noticed about the Core i7-6700K sample that Intel sent us is that it was rather sharp. Haswell came in a similar package but for whatever reason I’m convinced that Skylake has an edge in this respect. When I was reviewing Haswell, and Ivy Bridge before it, I never said to myself, “Holy shit, I think I just cut myself trying to put this damn chip into the socket.” Usually it’s the heat sink that nicks you. But with Skylake that’s all I could think about. It’s that sharp.

As a physical object Skylake’s sharpness is its biggest strength. Haswell was rather lacking in this department and AMD offerings would be quickly laughed out of any real cutlery competition. Pins? Pins on the chip? Almost a thousand of the damned things? Naw, that’s not sharp. 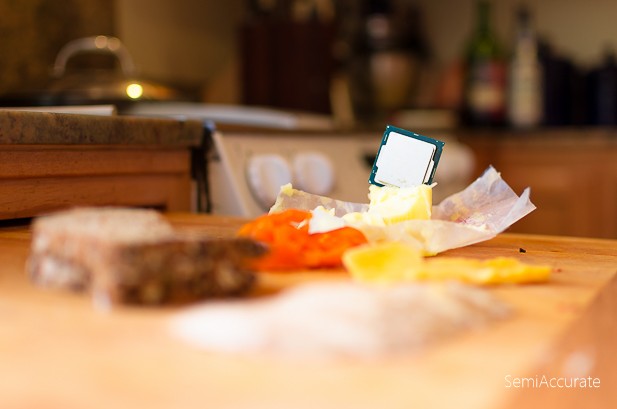 Thus we’ve reestablished what we’ve always known. Skylake is better than Haswell, and AMD can’t hold a candle to the kind of performance that Intel’s offering these days.

Platitudes aside we wanted to really stress out our Skylake chip. To do something other than endless Prime95 runs. Incidentally we now consider Prime95 runs longer than 60 seconds to be hardware abuse. So many chips have died needlessly at the hands of this pathological power, memory, and stability virus. We shall have no part in perpetuating its reign of technological terror.

So after briefly looking for, and failing to find, the MSDS on Skylake we set out to build a Skylake sandwich. Because what else were we going to do with it. 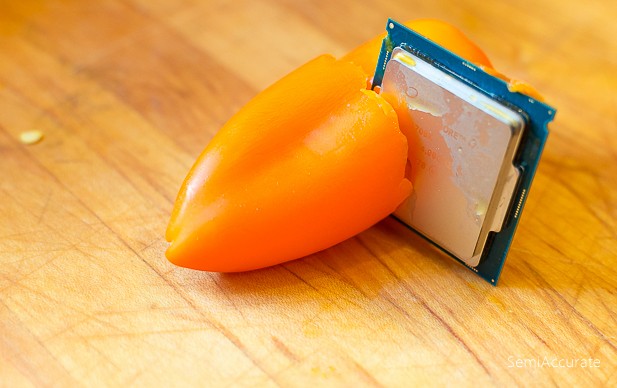 We started with the peppers. Kirkland signature multi-colored peppers to be exact. Here Skylake made major inroads, adequately slicing and dicing our peppers into smaller, if rather jagged, chunks. Although not the best seed removal tool Skylake performed above our, rather, my expectations. 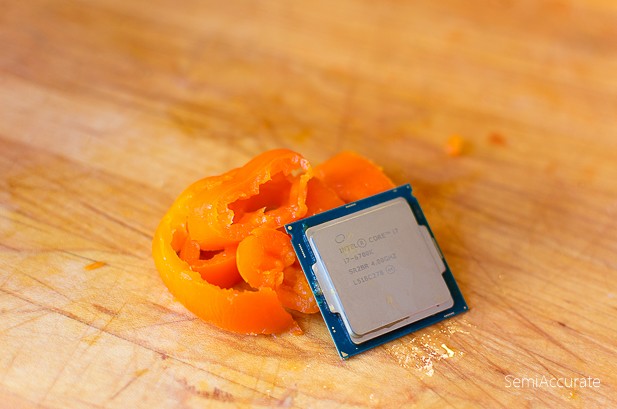 We were now convinced that making a Skylake sandwich was both a valid and meaningful benchmark of this billion plus transistor mini marvel of human achievement and a technically possible endeavor. 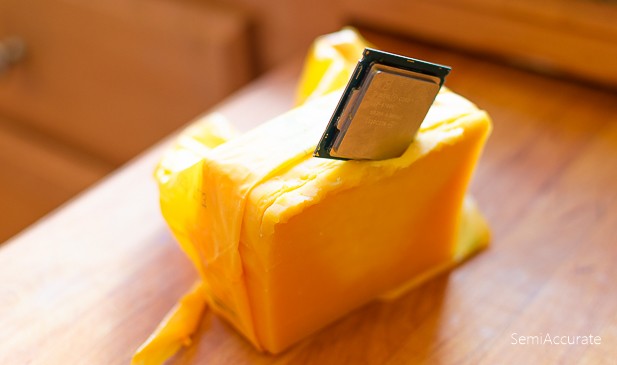 Then it was time to cut the cheese. A task that Skylake struggled with, limited by its uneven shape. While Skylake most certainly outperformed the competition in this benchmark it’s still not what we’d consider good enough. Unlike H.265 video playback or virtualization performance Intel’s still hasn’t mastered the art of cutting cheese with its latest chips. The magic eight ball insists that we’ll have to wait for Pelican Lake to see reasonably good performance in this regard. 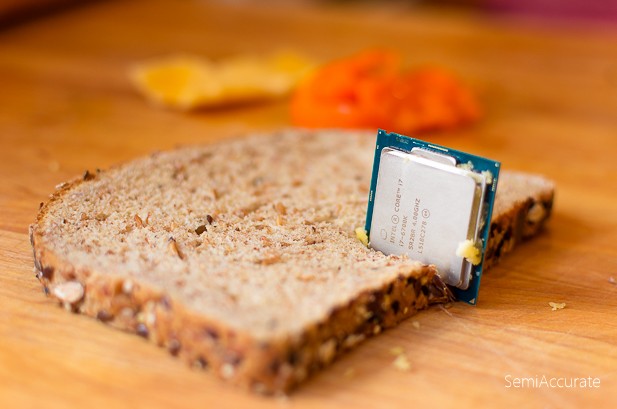 Our bread slicing benchmark didn’t present Skylake with much trouble given the sharpness that its shown in prior tests. Skylake is proving itself to be a veritable chopping machine. 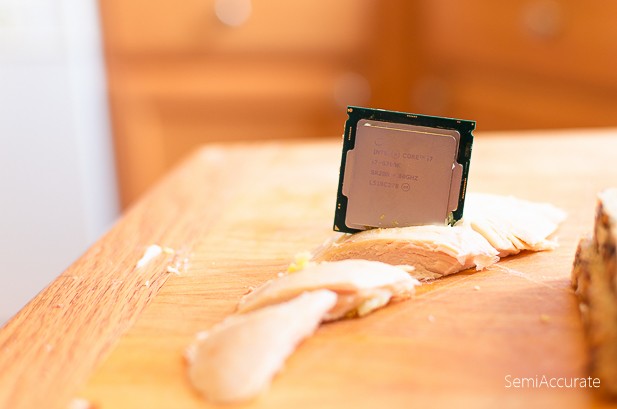 Next up we needed to get our ducks in a row, or perhaps our chicken breast into pieces. Here Skylake finally excelled at something. It’s shape is almost perfect for this kind of work and I have no doubt that this is exactly what Intel designed Skylake to do. I imagine the design goals meeting went something like this back in 2010: “I think we should aim for a 14nm process, four cores, a big block of cache, DDR4 support, and chicken cutting excellence.” Truly a delicious theory. 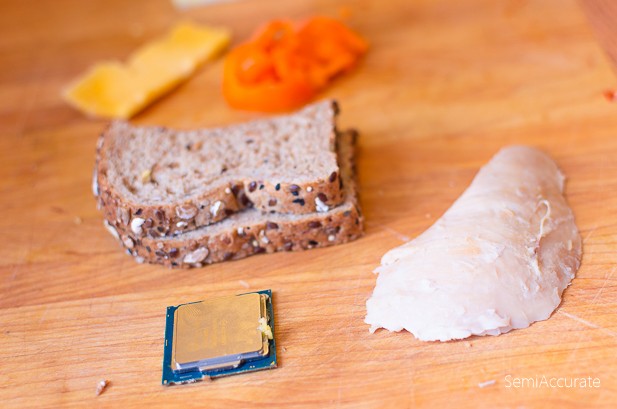 So far we’ve seen that for the most part Skylake can effectively process the components necessary to build a solid sandwich. But here’s where things get weird, or perhaps where Skylake takes this experiment to the next level. 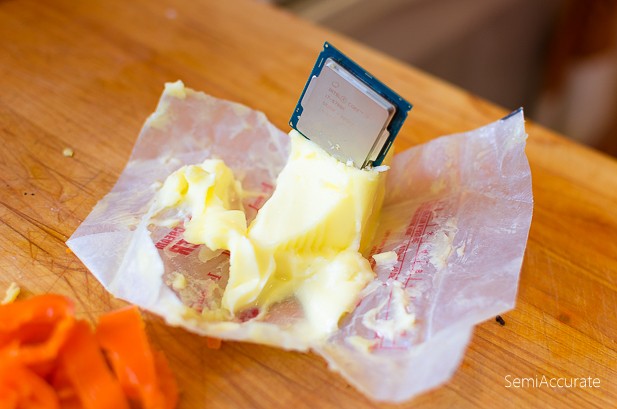 We buttered our bread with Skylake.

Thanks to its shape and size Skylake proved to be an excellent tool for buttering bread. It’s large surface area coupled with the sharpness of its edges helped it give an even spread across the length of our bread. Much like our chicken cutting benchmark Skylake performed admirably in our buttering test. Please note that our butter was kept at room temperature prior to the test and _not_ refrigerated so your mileage may vary if you try to use Skylake to spread cold butter. 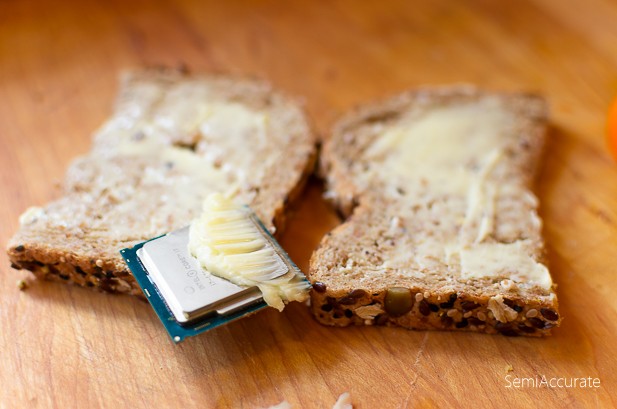 The only flaw to using Skylake as a buttering tool is that it’s difficult to clean effectively. Both the ridges in the heat spreader and the hardware on the underside of the chip tend to collect little nuggets of butter by the bushel. 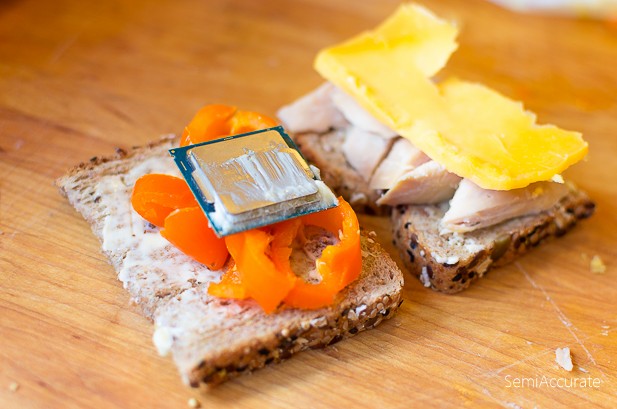 So there you have it: Skylake is an effective, if imperfect, tool for making a sandwich. It’s a solid improvement over Haswell and it’s leagues ahead of anything AMD can offer.

For the purposes of scientific discovery we did actually attempt to consume this sandwich, but stopped after a single bite due to a strong metallic taste. No chips were damaged or destroyed in the making of this article.S|A