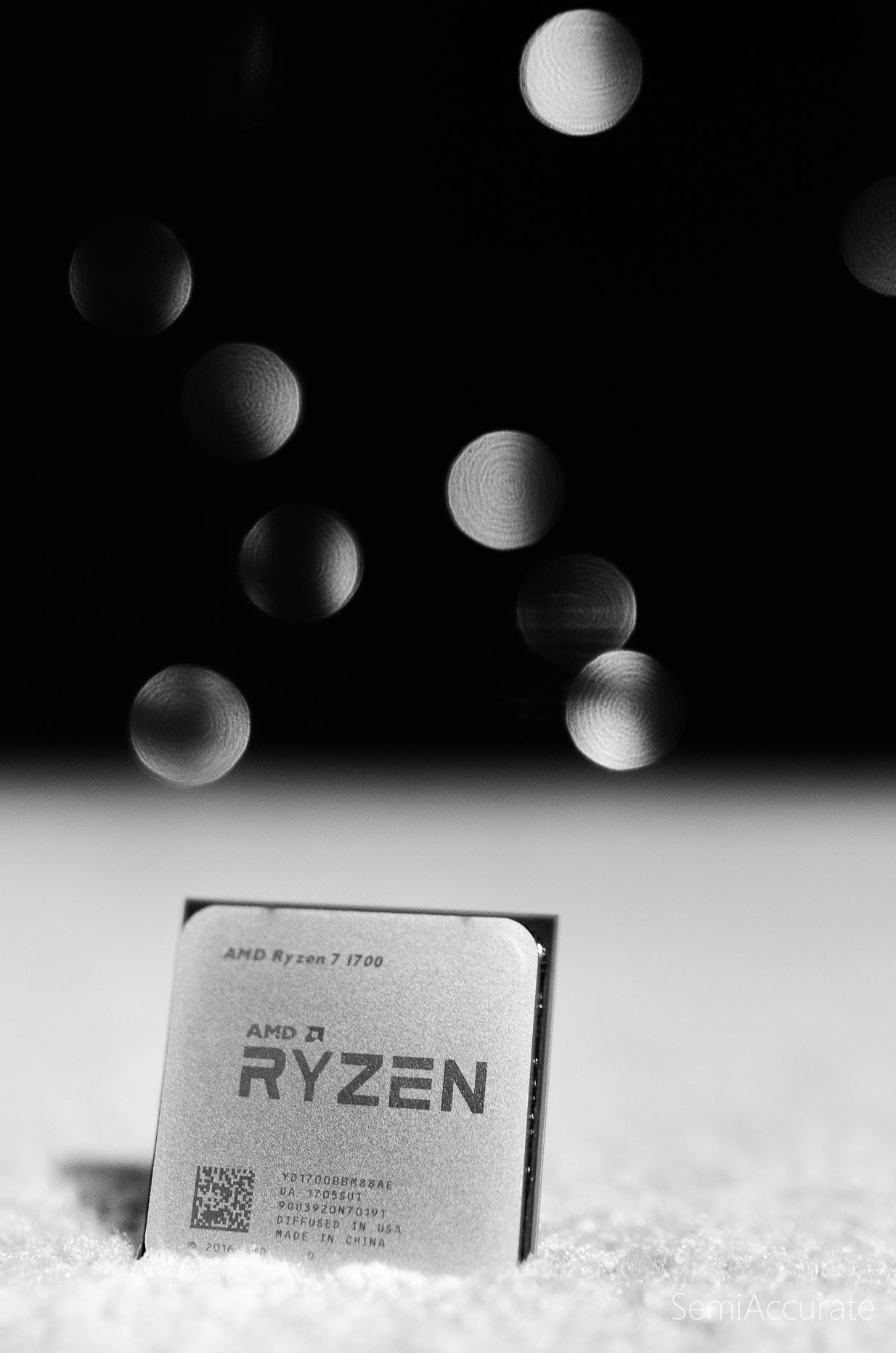 In this article I’ll be reviewing AMD’s Ryzen 7 1700. This chip was launched alongside the rest of the Ryzen 7 series back in March of this year. It offers 8 Zen cores at base clock of 3 Ghz and a boost clock of 3.7 Ghz all inside of a 65 Watt TDP. It’s backed up by a dual channel DDR4 memory controller, 16 MBs of L3 cache, and 24 PCI-E lanes. Most importantly the 1700 is the least expensive 8 core Ryzen chip that AMD offers. You can find it on Amazon for $290 bundled with AMD’s Wraith Spire LED cooler.

AMD’s Ryzen 7 1700 offers 24 on-die PCI-E Gen3 lanes and slightly different I/O options depending on what motherboard chipset you opt for. 16 of these lanes are reserved for graphics and if you go with the X370 chipset these can be broken down into an 8 + 8 lane configuration for crossfire or SLI setups. Otherwise it’s a single 16 lane link.

In the months since AMD’s AM4 platform launched alongside Ryzen we’ve seen multiple AGESA updates, watched developers make Ryzen specific optimizations, and motherboard vendors demonstrate their commitment to post-launch product support. I expect to see a few more AGESA updates roll out over the coming months, but as of now I have confidence in the stability of the AM4 platform. It’s not perfect and performance has definitely taken a little hit since launch, but it finally works well enough to recommend without reservation. 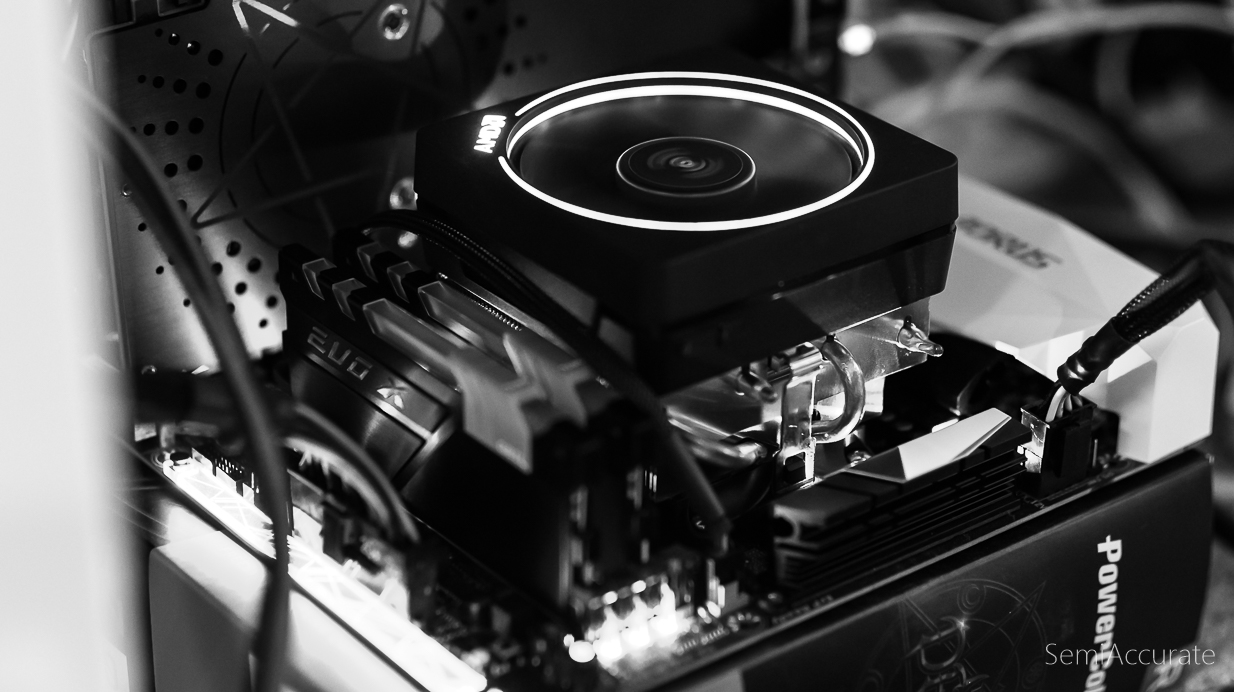 My favorite feature of the Ryzen 7 1700 isn’t actually in the chip, but rather the Wraith Cooler that it comes bundled with. Super easy to install, the LEDs are great, and this cooler isn’t noisy even under full load. Unless you want to go all in with a water cooling setup or a $70+ air cooler the Wraith is perfect.

If we’re to look directly at the current pricing structure AMD’s positioned the 7 1700 in a rather asymmetrical fight against Intel chips with fewer cores, but higher clock speeds. At $320 we have the Core i7-6700K and at a shade under $300 we have the Ryzen 7 1700. The Core i7-6700K offers four Skylake cores at a base clock of 4 Ghz and a boost clock of 4.2 Ghz all inside of a 91 Watt TDP. The difference in TDPs here might imply that AMD’s 7 1700 will draw less juice, but as our testing will show reality is a bit muddier. 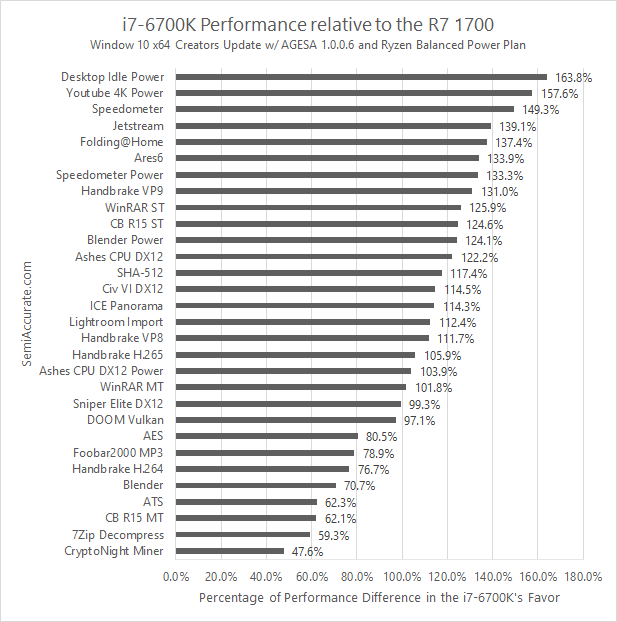 When only a single core is loaded Intel’s i7-6700K is vastly more power efficient than AMD’s 7 1700. This is due to two major factors: the i7-6700K draws the same or less power in lightly loaded tasks and its single threaded performance is significantly higher. In gaming workloads the difference is minor, and in multi-threaded workloads the 1700 tends to pull ahead–sometimes by a significant margin. But for browsing Facebook and picking fights on Twitter Intel’s i7-6700K is the better choice. Or better yet for AMD, get the 7 1700X if you care about out-of-the-box single threaded performance and need 8 cores. 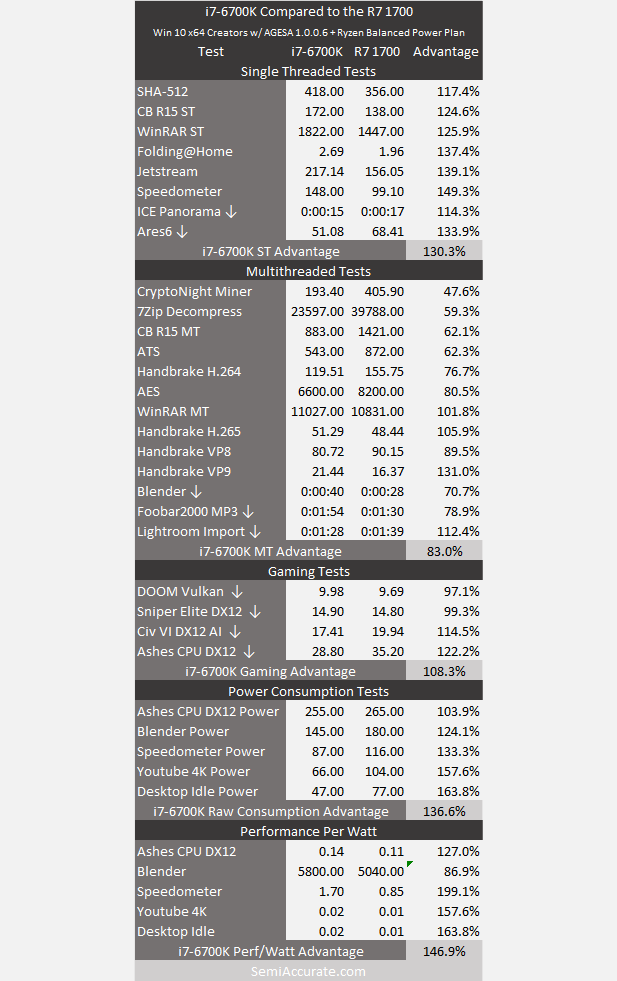 Digging a little deeper into these results we can see that the 1700’s deficit in single threaded performance isn’t quite made up for by its advantage in multi-threaded tests. There are some applications like Cinebench, CryptoNight Mining, and 7Zip Decompression that really can put all those cores to use. But the 1700 doesn’t perform as well as one would have hoped in our Handbrake encoding benchmarks where it’s a back and forth battle with the i7-6700K rather than a convincing win for AMD.

The place where things really get out of hand is power consumption and more specifically performance per watt where Intel holds a commanding lead. Obviously AMD’s got a lot more cores to feed than Intel here, but a 4 Ghz base clock is pretty high and no doubt starting to get into the rougher part of the voltage versus frequency curve for Intel. In any case AMD’s got a lot of ground to make up with the efficiency of its chips in lightly threaded scenarios.

What’s weird is that when completely loaded down in Blender the 1700 offers both better performance and better performance per watt than Intel’s i7-6700K. But that lead falls apart in all of our lightly loaded scenarios. Clearly AMD has its work cut out for it with future revisions of the Zen core. As Blender demonstrates the potential for a performance per watt advantage is there, but it’s not being realized in common desktop workloads at the moment. 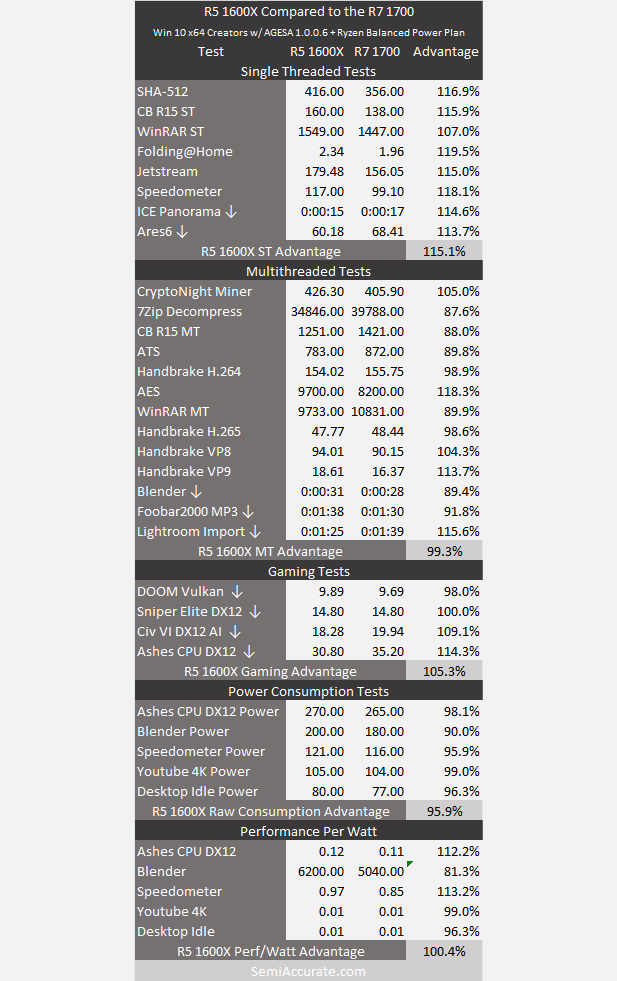 Looking at how the Ryzen 7 1700 matches up against the Ryzen 5 1600X it seems clear to me that the 1600X is the better choice. There are really only two reasons I can think of to grab the 1700 over the 1600X: if multi-threaded performance is your only concern or if you’re planning on overclocking it. Although the multi-threaded performance argument is rather weak given that our test suite shows that the 1700 and the 1600X are basically tied in that respect. Here’s another lesson on the trade-off between base clockspeed and core count where the differences between these two chips have negated each other from a performance PoV.

Looking at the Ryzen Community Overclocking Results GDoc we can see that most Ryzen 7 1700 owners are able to clock their chips up to ~3.8 Ghz at reasonable voltages. This means that with overclocking the 1700 is able to almost completely close the single threaded performance gap with the 1600X and 1700X and you’ll have multi-threaded performance better than the Ryzen 7 1800X to boot. 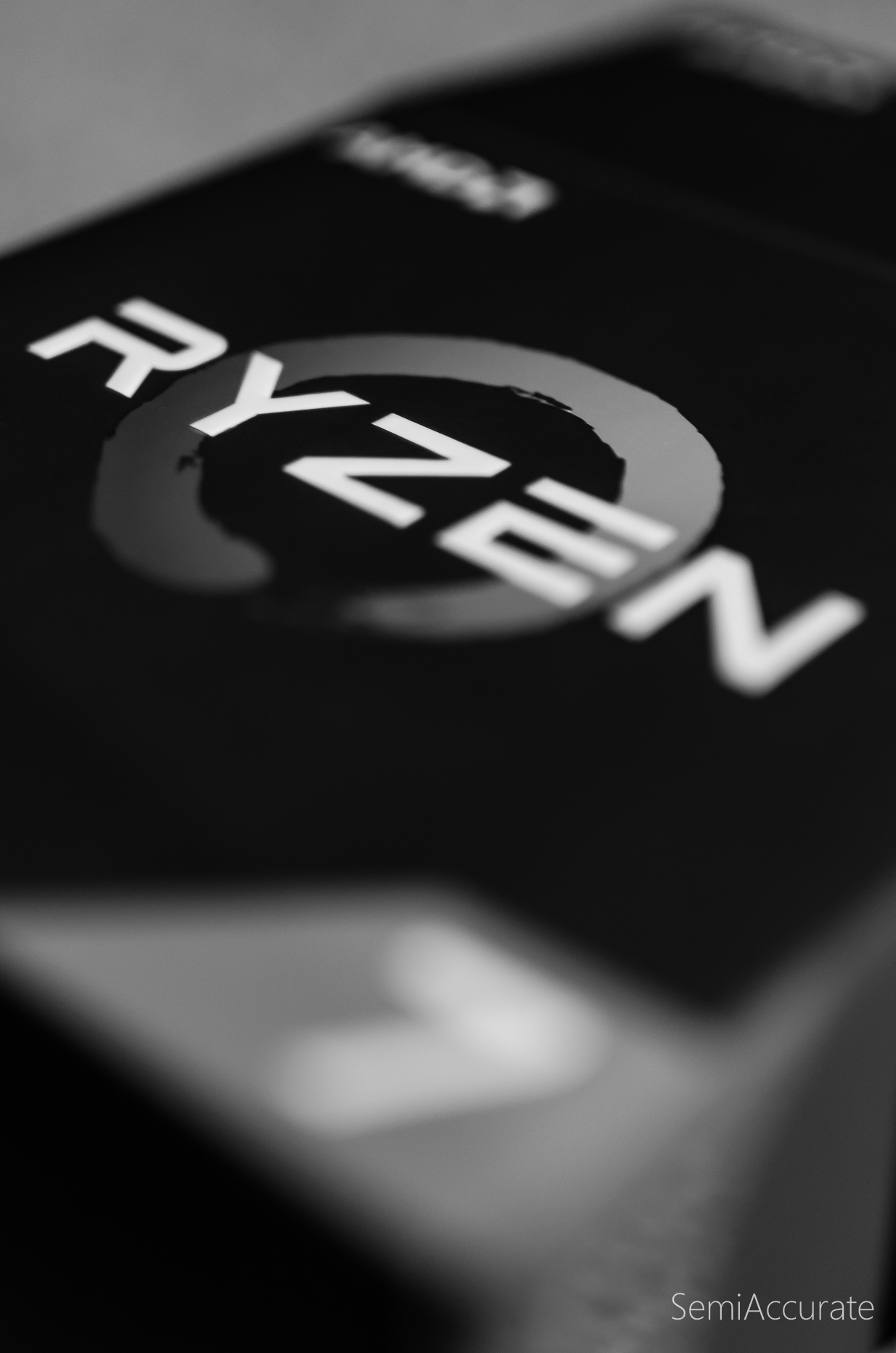 AMD’s Ryzen 7 1700 is the entry point to AMD’s Ryzen 7 product line and the cheapest 8 core Ryzen chip on the market today. But since the launch of AMD’s Ryzen 5 line-up and in particular the Ryzen 5 1600X it’s hard to recommend it unless your planning on overclocking. The biggest flaw to this part is that its single-threaded performance is weak compared not only to its siblings but especially compared to similarly priced competition from Intel. The Ryzen 7 1700 is by no means a bad chip, but to get the most out of it you’ll need to hammer it with heavily threaded apps and overclock it as far as the silicon lottery will take you. In that light the 1700 is an interesting value proposition, but it’s important that you know the risk you’re taking.S|A