Pre-MWC 2018: No one else is close despite the PR bluster

Qualcomm was showing off their X50 5G radio working at speed just before MWC this year. SemiAccurate thought the testing rig was as interesting as the device itself, take a look.

Qualcomm’s X50 modem is a bit of old news having been talked about for over a year now. SemiAccurate first held a functional handset form factor 5G phone from Qualcomm last October but the company hasn’t shown one working publicly, just data from tests. This changed in early February with the following test rig. 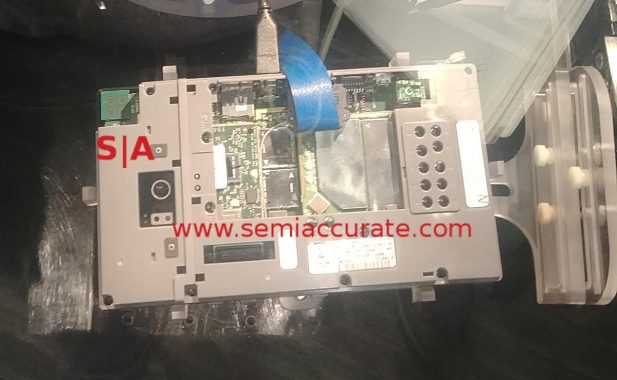 What you see is a Qualcomm X50 based modem test rig. It is slightly bigger than a phone likely due to the test rig itself, not the silicon or the PCB. You can see the mmWave 28GHz antenna in the top left corner just above the S|A logo. It is pretty obviously a 4×4 MIMO antenna and the PCB size is about what has been shown in the past, something that is basically dictated by the physics of the wavelength used. This is going to have curious effects on phone design but that is a story for another day.

The first interesting thing to note, other than the horrible quality of the pictures taken behind shiny shielded glass with badly placed spotlights, is the antennas pointed at the phone itself. There are six horn antennas pointed at the 5G test phone, all at very specific angles. If you think it is just made to be pretty and not a real test rig, note that each pair of antennas is mounted 90 degrees apart, this rig can test quite a lot of angles in one go.

Back to the X50 modem itself, the early demo units (RFFE) are on an unnamed 14nm process but the first gen release units are going to be shrunk to 10nm for production. Integration with the 4G radios is not set to happen until the 7nm shrink. Those chips, 7nm not necessarily 7nm integrated 5G mind you, start trickling out in late 2018, at least that is the plan.

Why is this test interesting? To start out with, there have been a number of 5G milestone claims from various manufacturers but literally none in public until this one. Qualcomm claims this is a 5GNR compliant 28GHz radio that works at multi-gigabit speeds. And they showed it working. The next closest that SemiAccurate is aware of is the Intel 8000-series modem which is so far advanced they have to fake pictures of it. Luckily it comes in a convenient bus mount form factor which probably is not the reason they won’t claim it is 5GNR compliant. This is the snarky way of saying no one appears close to Qualcomm on 5G.

So there you have it, the first (that SemiAccurate is aware of) demo of a functioning mmWave/28GHz 5G radio. It comes in a handset form factor, is based on GbLTE (Note: No one else has a GbLTE device on the market yet despite PR and claims), and it appears to work. If you think 5G is not on the near term horizon, think again, it is closer than you think. Widespread 5G will take a lot longer due to infrastructure buildout lag, but there appears to be little standing in the way from the tech perspective now.S|A