Intel is announcing a lot of goodies at CES ranging from CPUs to anti-competitive marketing plans. On the whole SemiAccurate thinks there is a lot to like from the Intel offerings this time around.

Lets start out with the shiny things, hardware, and to the surprise of absolutely no one we have the release of the 6-core Alder Lake-H mobile parts. When Intel launched the 8-core desktop Alder Lake/12xxx line a few weeks ago, they pretty much stated that the mobile parts would be coming out at CES. True to their word we have the following list of parts that you will soon see in laptops on a shelf near you. 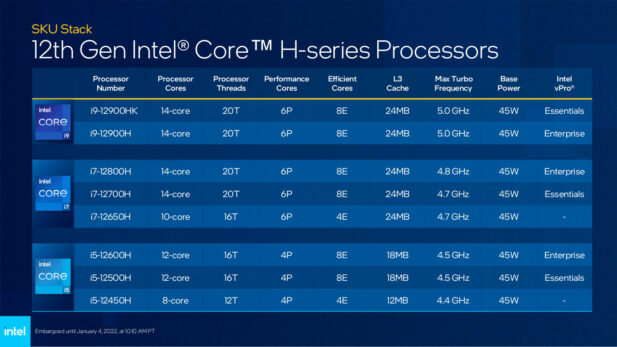 As you can see there are five 6C processors sold as i7 or i9s, the difference being the number of NCCs (Needless Complexity Cores) used to falsely bump up the numbers on store shelves. The i7 has four or eight NCCs, the i9 line has eight. Stepping down to the i5 we have 4C CPUs with either four or eight NCCs. Clocks are not stated, nor is PL1/2, but turbo ranges up to 5GHz on the high end and AVX-512 is still turned off for marketing reasons. If you are going to burn margins, at least do it idiotically. 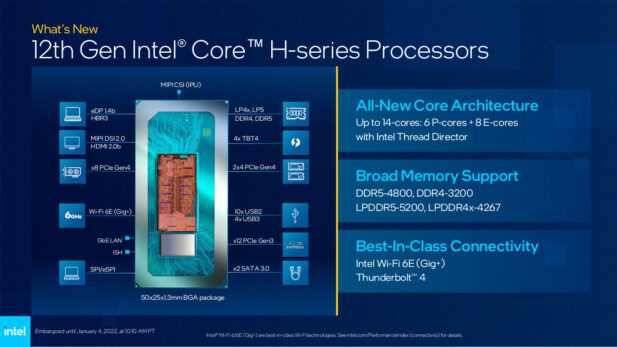 There are a few things you should pay attention to on the above diagram starting with memory. Intel supports LPDDR5-5200 and DDR5-4800 but also DDR4 and LPDDR4. This costs die area but unlike the AVX-512 decisions actually has a real end user benefit. AMD only supports LPDDR5 and DDR5 in their upcoming mobile parts, DDR4 in any flavor is right out. This should give Intel a solid competitive advantage in the market in 2022, DDR5 is not plentiful and a fallback plan is extremely useful.

PCIe4 is a bit of a regression in some ways vs Tiger Lake with an 8x link for GPUs and two 4x links for everything else. We will ignore the 12x PCIe3 lanes off the PCH because latency means you shouldn’t use it for anything more complex than case lighting which something you shouldn’t use in the first place. The real question is how crippled the -P and -U series will be for lanes but that will have to wait for the unveiling in a few months. Other than that everything is about what you would expect.

That brings us to the new mainstream 65W desktop line which ranges from 2-8 cores and has a real TDP of up to 202W. Not much to see here, just check the table to see how crippled the various dies are, some have all the NCCs disabled, some have HT fused off, and so on. At this point we feel obliged to mention that AMD does not play these games, you get the features you expect and nothing is fused off and sold back to you. The list looks like this. 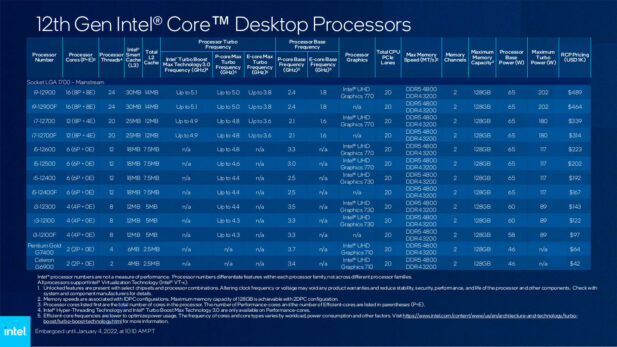 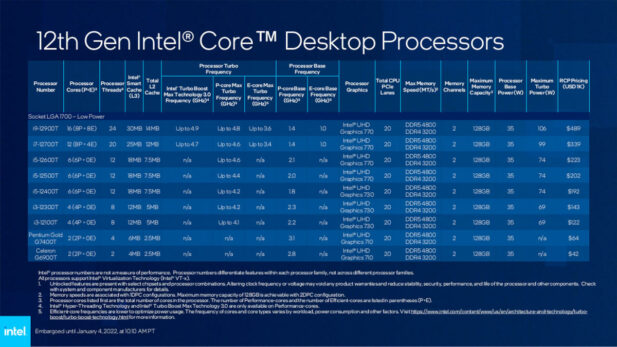 The best thing about the new Intel desktop parts is that if you buy them in box form, they come with one of three new fans called Laminar Coolers. In pictures they look really good and range from normal to near normal sizes, none of the Taipei 101 with inadequate retaining clips form factors this time around. The only real question we have is if the foul RGB lighting on the RH1 has a physical off switch or it is going to bring pain for the lifetime of the part via software. Either way they do look good. 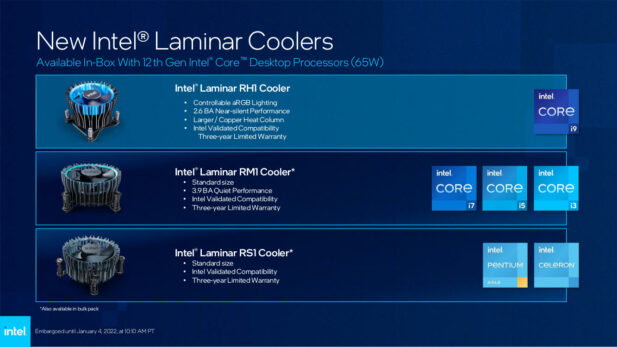 Then we have the long awaited 600-series chipset line fleshing out with the H670, B660, and H610 models. Not much to see here, just progressive winnowing of features from the Z690 chipset as you go down the stack. The only real problem is the H610 is… is far too crippled for any sane person to buy with only one supported memory channel. Intel should not have released this part, it is going to make them look really bad. Actually if you look at the specs of the lower end T-series parts, it can’t make them look worse than that but still, don’t do things like this Intel, it just drives people toward phones. If anyone tests a 12900 level part in an H610 board, please send me a link, KTHANKSBYE. 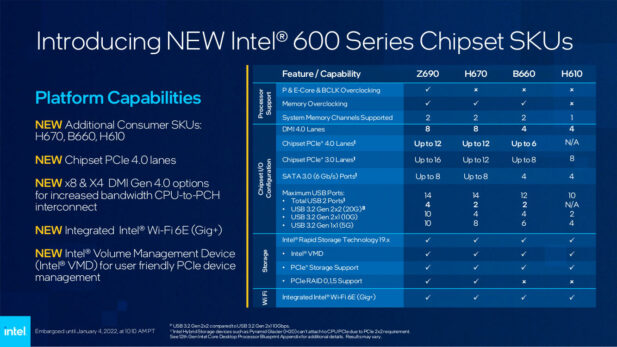 With that hardware part done with we come to the less pleasant bits, the new Evo ‘platform’. Intel claims this third gen marketing scheme will make everything better but like the last time, this one is nothing more than using marketing slush funds and ‘certification’ to exclude competitive silicon, mainly GPUs and radios. How do we know? We asked the last time around and they admitted it, then somehow forgot to repost that Q&A session afterwards. That said off the record no one at Intel will deny it.

This time around you have various hard targets that do little for the user and regress the state of things in several others. The hard targets are mandatory unless they aren’t for reasons which include using Chrome instead of Windows, form factors with small bezels, and lots of other things which make the whole thing a joke. The only real line in the sand is using non-Intel parts, that will always dry up the ‘marketing’ funds before you can say ‘anticompetitive but once again legal practices’.

To make matters more ‘meh’, you can now get Evo kickbacks with 45W CPUs which means the who pretense of thin and light goes out the door. And you can get vPro with Evo as well because business users need… well OEMs need kickbacks on business laptops too, users get nothing from the deal really.

In another sign of the apocalypse, Intel is introducing a spec for foldable screen PCs. You might have been aware of the spectacular failures of that tech in the phone world which included recalls, early deaths, and many more bits of hilarity all at eye-watering prices. ‘Analysts’ on retainer and web sites afraid of cuts to ad revenue sang their praises but in the real world, well have you ever seen anyone using one?

In any case the tech that no one other than marketers pushing products using it wants is now coming to a PC near you this year. Prototypes I get, products with foldable screens are just dumb. Short lifespans, huge price tags, and the joyous tactile experience of typing on a screen rather than a real keyboard, all for what gain again? Luckily over the past couple of years most of the idiotic form factors of the recent past have died a long overdue death, hopefully this one will join them quickly. About the only worthwhile thing the foldable PC spec will do is to unequivocally point out who is taking Intel cash while pretending to be independent.

Getting back to vPro it is now split into two, Enterprise and Essentials. Like Intel small business offerings of the past, this one almost assuredly precludes security by mandating Windows so take the claims as you will. Intel also refuses to do the basic right things surrounding security so SemiAccurate has no hope this new marketing push will be any different but hopefully we be surprised.

Overall at CES Intel has some solid hardware releases with the H-series laptop CPUs, mainstream mobile Alder Lake CPUs, supporting chipsets, and some cool looking new fans. They even teased DG2 which can’t come soon enough, the 4-6 week delay is unfortunate but not Intel’s fault. On the marketing side the company is sliding back toward the old ways and that only hurts consumers. To end with a surprise twist, Intel is the only major CPU vendor not putting the Microsoft Pluton malware in hardware so if you care about actual security, they are the only safe ones on the market.S|A