Memjet speeds up printing with MEMS

A PRINTER COMPANY called Memjet looks like they could change the way printing is done, or at the very least how fast it is done. Their technology looks like it achieves one of the holy grails of inkjet printing, full page width heads.

If you look at the printer itself, it is an unassuming box, about halfway between a normal inkjet printer and an HP office sized laser printer. The Memjet unit is lower but longer than most of the boxy units out there, but its size belies the speed. 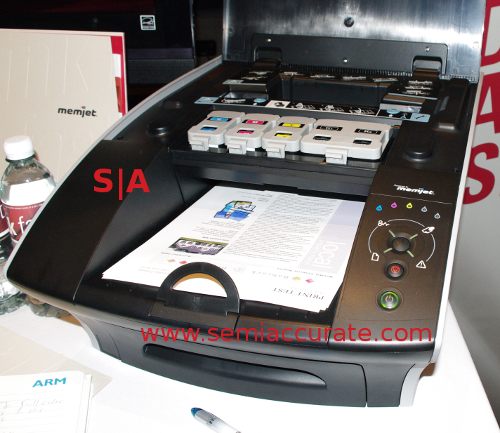 The Memjet printer opened up

The interesting part is what happens when you turn it on, it prints at quite amazing speeds, a claimed page a second. If you have ever seen a high end copier or large laser printer spit pages out one after the other, this unit is at least as fast. From the demo we saw at CES, it did indeed hit that mark with no warm up time.

How do they pull it off? Easy, the printing technology is something that until now has only been found in super-expensive industrial units, full page width heads. Yes, the print head is 8.66 inches wide and it prints an entire page on a single pass. How does it achieve this? MEMS, basically tiny mechanical devices made on semiconductor processes. If it isn’t too obvious, that is also the derivation of the name.

Because of the width, the speed of the printing is essentially limited to how fast the jets can switch, how fast the paper can be reliably fed, and how fast the ink can dry. Laser printers are fast in black and white, but that is obviously not full color. Color lasers may not have to worry about ink drying, but they need four passes through the imaging unit, leading to complex, expensive, and jam prone mechanisms. 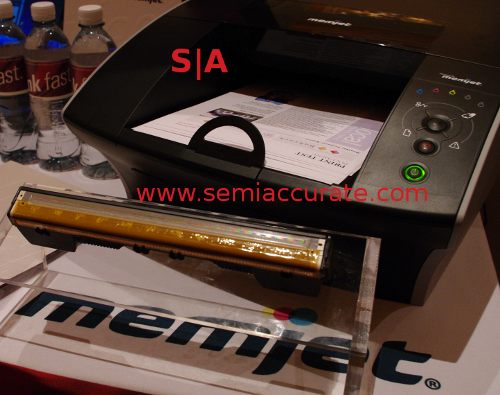 Lasers have one advantage over inkjets, they print an entire line at once with no horizontally moving parts. Traditional inkjets need to move the heads back and forth, leading to a fair amount of moving parts, alignment problems, and limited ink cartridge sizes. Large mechanical components like that can only be yanked back and forth across the page so fast before physics takes over in unpleasant ways.

As you can see from the print head mechanism above, it doesn’t need to move at all, the head spans almost the entire width. The head itself is the rainbow colored strip near the top of the cartridge, it is above the yellow stripe on the bottom. As the paper passes under it, the entire page is printed in under a second at 600DPI. In action, it looks like this.

For those of you who understand semiconductor fabrication techniques, there is an obvious problem, the width of the head. How many 8.66″ strips can you cut out of a 12″ wafer? Not many, or at least few enough so you would end up wasting more of the wafer than you use. It can be done, but it isn’t cost effective.

The head up close

Memjet solved this problem by breaking the strip up in to 11 separate chips, each about 3/4 of an inch long. How they are seamlessly assembled wasn’t explained, but the end result is a single strip of 70,000 print heads. If it you do the math, 4 colors and 8.66″ means a little over 2000 jets per color per inch. That should comfortably beat the claimed 600DPI, so no qualms there. In addition, Memjet representatives claimed there would be a photo oriented head/ink combo coming in the not so distant future.

This level of speed and density brings up a problem though, rendering the pages out takes a lot of horsepower, and that means expensive imaging engines. Memjet solves this by doing most of the number crunching on the host, it will spike CPU time, but any modern PC should have more than enough to spare. Some of the work is done on the printer with an Omnitech ASIC, but the majority is on the host PC.

Intel is probably very pleased with this technology, they have long been a proponent of consuming ever more CPU cycles by subsuming what used to be peripheral chips. The horsepower is there, why not use it instead of paying for an additional single purpose part? Fair enough.

One down side to this approach is that it makes for large and complex drivers, and can lead to proprietary printing languages. Doing this to peripherals is nothing new, but printers moved away from proprietary languages to Postscript and PCL years ago. A bigger problem is that the drivers are only going to be there for OSes supported by Memjet, and that means no Linux. Darn.

One last thing to note, Memjet does not make printers, they make parts of printers. You will never see a Memjet device on the market, but you will see some things powered by their technology later this year. Before 2011 is out, there should be several different brands on the market, at least one of which is a large Taiwanese device manufacturer.

In the end, Memjet says the home/office printers with their technology will cost in the $500-600 range, and per-page costs landing at around 5 cents. If you compare that price to HP or similar sellers of ink, Memjet is absurdly cheap, in high end laser territory per page for a small fraction of the printer cost. If it all works as promised, and they get a Linux driver out, they could change the industry.S|A