Asus had some of the best products at CES

ASUS HAD A ton of goodies at CES, and most didn’t make headlines because the flashier things like GPUs and mobos got all of the love from the press. Some of the devices that fell through the cracks however were quite innovative and cool.

The first thing is a wireless router, the RT-N66U, it is a Republic of Gamers (RoG) branded part. While it may have some gaming tweaks, if you understand networking, it will make you drool. The short story is that is is a three channel dual band 802.11n router with a couple of USB ports, 4 GigE ports, and a real power switch. It also looks pretty good in the RoG red and black color scheme. 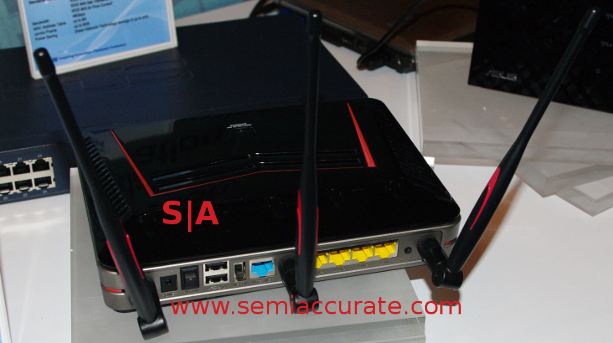 Why is this a standout product? The parts under the hood are what counts, and that starts out with an unspecified 600MHz Broadcom CPU, likely an A8 class part. Asus claims that this is the fastest CPU out there in this class of products, and we believe them. From there, you have 32MB of flash, so if you want to put in customized software, you have plenty of storage space.

Best of all, the RT-N66U has a generous 1GB of RAM, another likely candidate for best in class. Why does this matter? Because of how TCP/IP works, or in the case of small routers, doesn’t work. TCP/IP takes up a bit of memory for each open socket, so the more you have open, the more memory you need. When a connection is released, the memory frees up slowly.

This is not a big problem if you have a few sockets open, or even a hundred. When you torrent, say grabbing the nightly Ubuntu builds, and there are thousands of seeds, you can run out of memory in a heartbeat. The higher load, the worse garbage collection tends to work, so you get hit on that end too. This adds up to one of the most common type of router meltdowns out there, and there is almost nothing you can do to avoid it without hammering network throughput. Unless you buy a RT-N66U, the gig of memory will do a lot here. For less than $200, it is a great deal.

From there we move on to laptops, or at least lines of laptops. In this case, the B- and P- series of business notebooks from Asus. Both are ‘business class’ machines which basically mean that they forgo the usual useless buttons, LEDs and bits that flake off and wear, and put the money saved in to better materials, construction, and other things that make a notebook last.

These notebooks stand out because they can all use the Power Station II docking station. Yes, you read that right, Asus has an honest to goodness docking station, not a crappy USB one like HP tries to pawn off on the unsuspecting.

This one adds a keyboard/mouse port, 2 USB2.0 ports, mic and speaker jacks, a parallel port, a serial port, HDMI, DVI-D, VGA, and GigE. The Power Station II also has a power in, a lock attachment point, and best of all, a one button quick disconnect. Given how hard it is to find a real docking station from any maker now, Asus really needs to be commended for making these docks.

Last up, we come to the box that a motherboard came in, and it is probably the coolest thing I saw at CES. I would almost go as far as to say the prototype box for the E35M1-Deluxe Brazos boards was the only innovative thing I saw at CES. That isn’t because CES was lame, it was, but the box really is that cool. 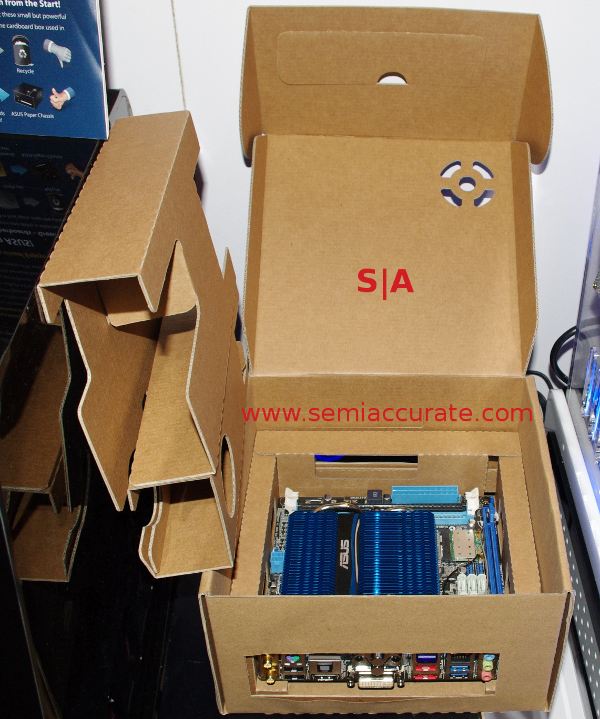 This unmarked cardboard box prototype is theoretically what the E35M1-Deluxe may someday ship in. If you punch out the perforated holes, the box becomes a case for your new PC. It has spots to fit the drives, fan mounting holes, and various standoffs just like a real case. Best of all, it costs basically nothing, you get a free, lightweight, and recyclable case instead of shipping waste.

Like the rest of the products listed above, you don’t make them by following trends and adding a few percent of something here and there. All of these things are either best in class, or very close to it, and likely a lot cheaper than the competition too.

If that isn’t enough to make you smile, try walking around CES and having people ask you what you saw that was cool. The look on their faces when you tell them that a brown cardboard box was the best thing at the show is priceless. When you explain it to them, it just gets funnier. Well done.S|A