The best card you should not buy

AMD’S ANTILLES DUAL GPU card, now known as the HD6990 is finally here, and it is the fastest card money can buy, period. There is only one problem, and unfortunately it is a showstopper.

Before we get into the ugly part, lets start with the good. Take two of the current Cayman/HD6970 GPUs with the full 1536 shaders, and put them on a single PCB, and you have Antilles. Downclock the cards a bit to keep power use to simply silly levels, and you end up with a total of 3072 of the new VLIW4 shaders at 830MHz, between 6950 and 6970 clocks. 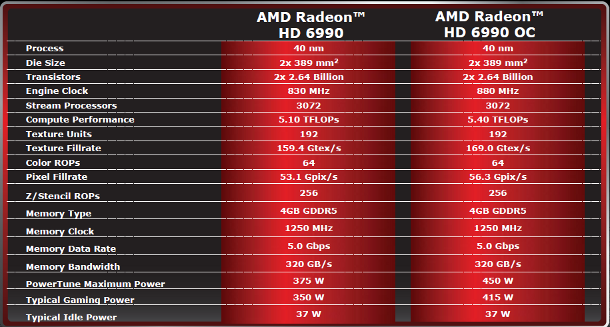 The new cards should perform a bit better than two 6950s in crossfire, Antilles has about 10% more shaders, and they run 30MHz faster. By all accounts, that is exactly what they do. We didn’t get a card, so we can’t say first hand, but The Tech Report has a very good writeup here, and our analysis of the architecture itself here and here. Short story, it is the fastest card on the market, bar none, taking the crown from AMD’s own 5970. The closest Nvidia card is about half the speed.

One big speed advantage that comes at the same time as the 6990s release, but should be equally applicable to any dual 69xx setup, new drivers packing a lot of goodies. The most obvious one is an official 1×5 monitor setup, basically five monitors in portrait mode for resolutions up to 8000 * 2560. While this has been shown off and somewhat supported in the past, it is now official, and supported by Dragon Age II, Deus Ex 3, Dirt 3, Shogun II, and many others.

The new drivers also bring in full 3D support natively instead of using iZ3D drivers or other forms of hacked quad-buffering. Yes, from this point on, 3D is a first class citizen at what used to be ATI.

On the housekeeping side, the newest driver set has driver update notifications in the driver itself. It periodically checks, every two weeks is the default for new updates, and lets you update from within the driver. Handy for the average user, but enthusiasts will probably know about leaked betas long before they ever see a pop-up window.

Best of all is some massively updated Crossfire capabilities. If you look at the Tech Report numbers linked above, you will see the 6990 scales much better than two AMD cards have of late. This added speed, or more precisely lack of speed drop, is somewhat due to the 69xx/Cayman GPU itself, but the new Crossfire engine plays a huge role too. Dual GPUs finally get the proverbial airflow opened up, and with the 6990, it pays huge dividends. It will be interesting to see what these drivers do for three, four and more GPUs.

The 6990 card has a few hardware tricks up it’s sleeve too. It is a bit more than the usual two chips on a PCB, but the differences are in the details. First is the layout, and unlike every other dual GPU card out there, the 6990 has the fan in the center with a GPU on either side. This means that cold air is sucked in and blown out evenly across both of the GPUs, theoretically leading to higher efficiency and better cooling. In the ‘old’ way, cold air is sucked in, cools one GPU, and the warmer air then goes over the second GPU leading to far less cooling. AMD is claiming 20% better airflow with the new layout.

From there, we move on to the thermal pads, phase changing one time pads in this case. The TIM melts on the first use, and bonds to the vapor chamber much more completely than a ‘normal’ TIM. The upside is that you get 8% better efficiency, the down side is that if you take it apart, you have to use a TIM with 8% worse efficiency. Moral, don’t pull the heatsinks off this card.

Last up, there are two very large vapor chambers, not one big one like some previous GPUs. It doesn’t take a genius to realize that you can put in larger and more efficient chambers with the new layout, and that is exactly what AMD did. End result – much better cooling on the 6990.

To feed the beast, you need precise power control, and AMD is using a couple of Volterra digital PWMs. These should provide much cleaner and more precise power regulation to the cards, a necessity when you are dealing with thousandths of a volt, switching at high speeds, and with painfully high amperages.

Antilles/6990 consists of two Cayman/6970 ASICs binned for both high overclockability and low leakage at those clocks. The older Hemlock parts were binned for OCing only, not leakage. On top of this, 6990 is undervolted, it runs at 1.12v instead of the 1.175v of Cayman in 6970 guise. This all adds up to a card that pulls 375W at 830MHz. Not bad, but there goes the PCIe 300W limit.

6990 draws power from two 150W 8-pin PCIe power adapters, so the 375W draw is perfectly within the limits of those plus the 150W delivered through the card slot. This power delivery setup is spec’d for 450W, so there is headroom.

That brings us to the Antilles Unlocking Switch for Uber Mode, aka AUSUM. Yeah, pun pun, but you have to call the second BIOS switch something. If you don’t, the marketing gods will be displeased, and the world is chaotic enough without that happening. If you flip the switch from position 2 where it ships to position 1 and reboot, your card is instantly overclocked. What was an 830MHz, 375W card running at 1.12v is now an 880MHz, 450W card running at 1.175v. Instant speed, just add BIOS and a few electrons. Isn’t that great?

Short story, no it isn’t, not at all. This is where 6990 goes from being the fastest, bestest, happiest-est card on earth to something you shouldn’t buy. No really, you should not buy one of these cards, go get two 6950s or 6970s instead, The 6990 has a fatal flaw, and it is simply due to an AMD decision, not hardware or software. If you flip that switch, you void your warranty. No really, you do. When I said that it wasn’t the case, I was flat out wrong.

Talking to some AIBs before an official briefing, several told SemiAccurate that there was no way that rumor was true, the card is designed to run at 450W, and that there is no problem doing so. At the time, they said that they would abide by any warranty, even if AMD didn’t. The next day, I was officially briefed on the 6990, and the handcuffs went on.

The award for dumbest legalese goes to…..

Sadly, during that meeting, I was told that AMD would indeed void the warranty if the card was used as designed, promoted, and expected. Unfortunately, I could not say so until the embargo lifted. Checks with multiple AMDers, and the presentation itself stated as much.

To say that this is stupid is stating the obvious. No, let me take that back, it is flat out irresponsible for AMD to do this. They designed the card for 450W, all the parts are spec’d for 450W, and they promote it as a 450W card in their literature, going so far as to make a marketing acronym, AUSUM, for it. But if you use it, your warranty goes poof.

Several AIBs are not pleased, and are in negotiations with AMD about this now, but there is no resolution as of this writing. This lawsuit-in-waiting has two outcomes, neither of which are good. The first is that if the card dies, and you have used it in 450W mode, you are SOL, $699 flushed. Not good.  A quick check with a local attorney said that this would seem to fall afoul of false advertising laws and without more information, well, he’s not signing up to be your attorney as he doesn’t do class actions.

The other option, hinted at by several AIBs, but we are still waiting for written confirmation before we name names, is that they will take the high road and honor the warranty that AMD should, but does not. Unfortunately for them, they will likely end up eating the $699 in your stead. Not good but the end user is protected. Moral, if you are going to buy a 6990, buy it from a reputable AIB and dealer, it will make a difference should something go wrong.

In the end, the HD6990 is a hair short of perfect. It is the fastest GPU on the market, period. Couple that with better cooling, better drivers, and better everything, and it is a true beast of a card. Unfortunately, if you use it as designed, promoted, and sold, you void your warranty, and that is a deal breaker. Until AMD backpedals on this abject stupidity, you would be best off not buying a 6990.S|A