As computer graphics chips are set to move away from using TMDS and LVDS signaling over the next couple of years, Parade Technologies has come up with a simple solution that will allow for both HDMI equipped displays, as well as DVI displays to be able to easily interface with future graphics products. The solution is a de-multiplexer which can take the DisplayPort signal and turn it into a TMDS signal and output to either an HDMI or DVI port.

Parade’s solution to a problem that doesn’t quite exist, yet, is simply called the PS8336 and it enables notebook and graphics card manufacturers to retain support for HDMI 1.4 and single link DVI ports without the need of an external dongle. Dual-mode DisplayPort connectors allow for HDMI or DVI output via simple passive adapters, but these add extra cost to both the manufacturer and consumer and while the PS8336 isn’t free, it should add a much lower overall extra cost. 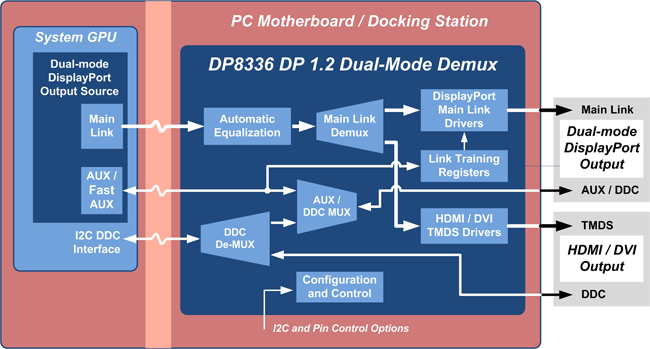 It also retains the full functionality of the DisplayPort connector with full speed AUX channel. However, it doesn’t appear as if you can use the DisplayPort connector and the HDMI/DVI port at the same time though, but this is really a minor issue. We can see the PS8336 appear in a lot of notebooks in the future as consumers are still going to want support for HDMI, especially as we should be moving on to mobile graphics with DisplayPort only support quicker than on the desktop market.

Parade is also suggesting that the PS8336 would be useful in docking stations and this way you’d get an extra connectivity option on the docking station that might not be part of the actual notebook. As for desktop graphics cards we might have to wait a while before the chip makers remove support for TMDS signaling, but even so, with this solution it wouldn’t be a major problem. At $1.75 each in high volume we can see this 7x7mm chip becoming a standard solution in many devices in the future, at least as long as we finally start moving away from display panels using LVDS signaling in notebooks and towards eDP support.S|A