Qualcomm (NASDAQ:QCOM) was showing off their new Snapdragon CPU/SoCs at Computex, but that wasn’t the big news. The big news is how they messaged this and other things.

First up, there were three big pieces of news from Qualcomm at this year’s Computex. The first was that the dual core 3rd generation Snapdragon chips, MSM8260 and MSM8660, are now shipping. The company was showing off various devices and form factors with both these and older chips in them. If you follow the ARM world, this announcement is anything but a surprise, but product releases are never bad.

A little further out is the next generation MSM8960, it starts sampling this month. This new chip is a SoC with the all new Krait core. As with all new architectures, expect faster clocks on the high end, better overall IPC, and improved performance per watt. If things sample this month, you can expect devices with the MSM8960 later this year or early next.

Unlike certain other manufacturers, Qualcomm tends to deliver on their promises of performance and time to market. If you look at the overwhelming success of the current Snapdragons, both the MSM8260/8660 twins and the MSM8960 are going to be in a lot of shiny widgets over the next year and change. Don’t underestimate these three parts, they have a good chance of being the market leaders. 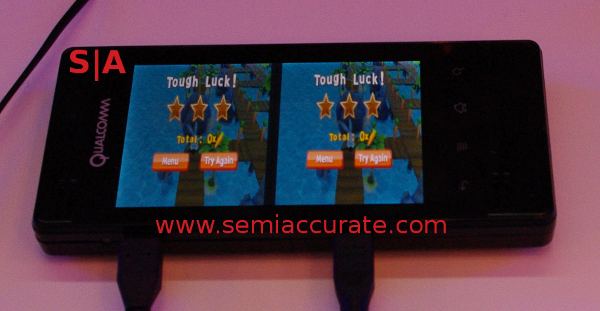 Should that not be enough for you, and you have the urge to bang the bare metal, the device of your dreams is here. Qualcomm now has a dev kit for the MSM8660 available, you can find it on BSquare now. It may not be pretty, but it makes developing on a cutting edge mobile SoC a lot easier. That said, before you go out and buy seven, remember that it is not cheap, and the FCC doesn’t like people playing around with 3G modems on a low level, so some things may not be turned on. Still, it is available now. 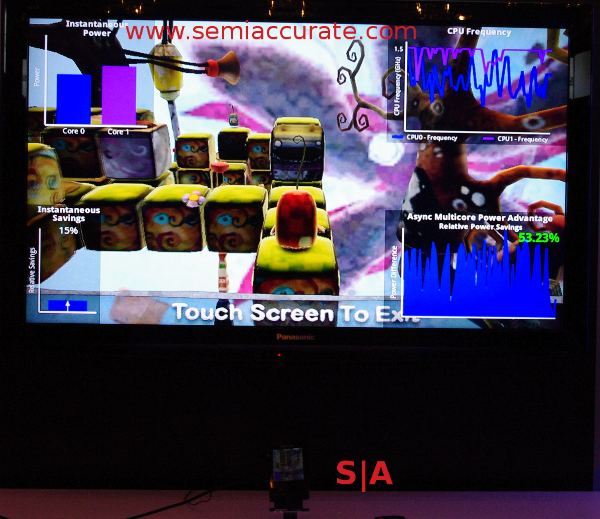 There were a few nifty demos in the top secret (not really, but it sounds better than “that room at the Hyatt with the Qualcomm sign in front” doesn’t it?) Computex demo room. The first was full frame 1080p 3D playback from a phone. The dev platform above was putting out movies and games at 1080p/120Hz, something that bodes well for the phones based on it.

Technically speaking, 1080p/120Hz isn’t that big of a trick, but doing so in power levels acceptable to phone makers is. This may not sound like much given the industry rhetoric of late, but you might recall Nvidia lost the Boxee contract because it couldn’t do high bit rate 1080p formats, much less in the promised power envelope.

Next up was quad microphones, something that the newer SoCs have. The MSM8860 dev platform was showing this off with a standard ultrasound pen. The idea was to use echolocation to track what was being written as a poor man’s scanner. The demo worked reasonably well, but I think the really cool stuff will happen once this capability gets in to the hands of mad scientists. Keep an eye on this tech.

Last up was 3D capture. The MSM8860 dev platform was capturing 3D video in real time and outputting them to a 1080p screen. If you thought 1080p/120Hz was a trick in phone power envelopes, you can now do 1080p/120Hz encode and decode at the same time. I guess we have a new leader in phone video capabilities.

Moving away from the hardware, we have the biggest news from Qualcomm, the fact that they are now talking about their products, and doing it loudly. For the past 5+ years, companies making chips for the widget and phone space were notoriously tight lipped. Trying to talk to most of them, Qualcomm included, was far less fruitful than having a chat about, well anything really in Kiswahili, to your taxi driver in Taipei. They just didn’t want the world to know the cool things they were doing.

To give credit where it is due, when Nvidia entered this space, they banged their own drum hard and loud. All the other chipmakers in the space were used to treating the press like plague ridden badgers going after a piece of meat in their pocket. Nvidia’s methods seemed to have caught everyone in this space by surprise.

Like what happened with the development roadmaps, Qualcomm took notice and upped their game. From the time you got off the airplane in Taipei, you saw banners and taxis plastered with Snapdragon ads. It was obvious that Qualcomm wanted you to know about their stuff, and best of all, they have a really cool logo. The company did a complete 180 in a very short time.

Couple that with actually delivering the chips that they promised, when they promised, with the specs they promised, and you have a changed game. The most important thing to come from Computex is not that Qualcomm has good chips, but the simple fact that they now want you to know about them. If Intel and TI wake up to this, it is truly game on.S|A