Intel changes radios on the fly

At IDF, Intel (NASDAQ:INTC) was showing off a new research project called Heterogeneous Connection Manager(HCN). The idea is simple, pick the best connection a device has, and route the data that programs need seamlessly through that pipe.

As with most simple to describe projects, the implementation of HCN is pretty hard, harder than you would think.  That said, in something like a smartphone with multiple radios, all on the move, and multiple apps with different requirements, it would be a very nice feature to have. This is why Intel is researching HCN, to make future connections better. (Pun not intended.)

From the overhead view, the basic idea is that the lower levels of the networking stack can talk directly to the higher levels, and the other way around. This isn’t talking in the sense of sending packets or data, just sending information about the apps running, and the connections themselves, back and forth. The diagram looks like this. 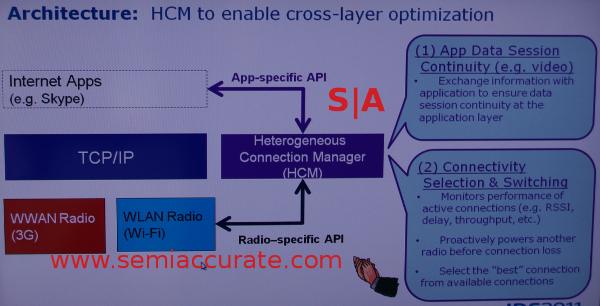 Easy to diagram, tougher to do

The HCN manager needs two types of information, the quality of the link as given by the radios themselves, and the wants and needs of the apps. A radio tends to know things like signal strength, bit error rates, and other similar data sets, but they usually keep it internal and use that only to tune the signal. HCN would need a radio to cooperate, so it currently works only with Intel radios, but the idea is portable to any radio that is willing to spit out the information needed.

On the other side of the stack, an app will need to request what kind of service it needs. Does it care more about bandwidth, latency, throughput, consistency, or several other metrics? Videoconferencing has different needs from torrenting, and web browsing traffic doesn’t really look like text chatting, and all four can tolerate different types of delays. 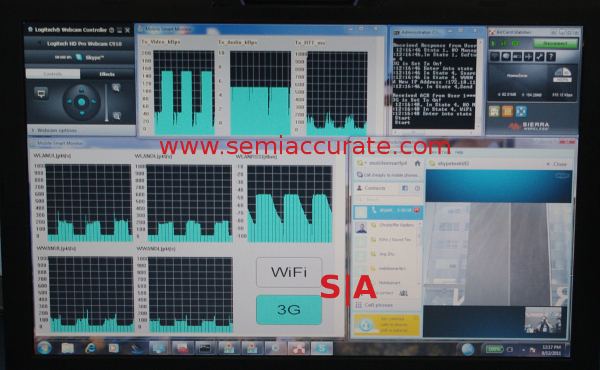 A bit more complex in action

In the end, what HCN does is try to juggle signal paths and connections to preemptively use the best one possible, kind of like a proactive QoS manager. If all goes well, theoretically there will be a set of standards that could emerge from this, so radios can talk to apps, and apps to radios, all through an HCN like intelligent manager. Think of it as herding cats in your phone, all done by magic.S|A