VIA shows off 4-port USB3 chip

At IDF, VIA was showing off two new USB3.0 goodies, a 4-port controller and a card reader/hub. Of the two, the controller will have the most impact, it is the first four port model on the market.

First up is the new VL800, a 4-port USB3 controller. It also has a 2-port variant, the VL801, and both ‘second generation’ parts are officially USB-IF certified. These should be a really good thing for laptops, not to mention desktops. A four USB3 port equipped laptop sounds mighty tasty, doesn’t it? 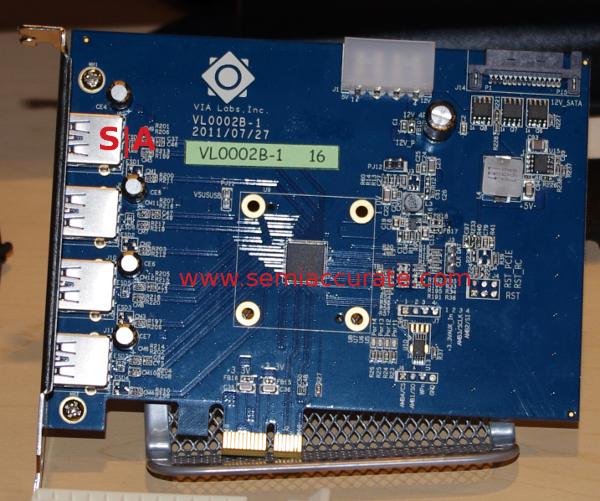 The one lone down side we can see with the VL800 is what appears to be only 1x PCIe lane in. This may limit throughput a lot, but then again, not many people use 2 USB3 devices at full speed simultaneously, not to mention four in the same direction. It will be interesting to see how this chip fares in real world testing.

On the brighter side, the chips is cheap, sub-$3 for four USB3 ports, and the 2-port variant is less than $2. With sufficient volume, you can probably drive this a lot lower, but $.75 per port is not bad, especially considering DarkPeak….LightWire….no, ThunderWire….Err that lock in technology that Intel is pushing, is well over $10 a port. 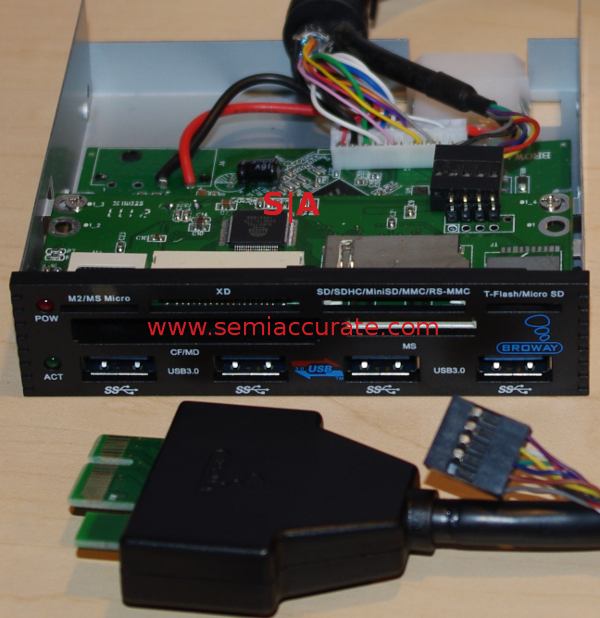 Who doesn’t need one of these?

Even nicer is a device, other than a memory stick, that actually uses that available bandwidth. They are on the market, and VIA was demonstrating one, a Broway 4-port hub plus card reader. If you have a USB3 equipped PC, you really need something like this, it is one of the few things you can put in a case to use the 3.5″ drive bay sanely. Given the cost of the controller, it should be pretty cheap too.

All in all, it looks like USB3 finally has enough certified components to fill the market needs. Via has the most complete line of chips that we know of, and things are really looking up. It is about time.S|A