Prices are going up. Maybe we need government intervention…

According to sources that we have spoken with in the Taiwanese market both Samsung and Western Digital have decided to suspend shipments of disk drives to PC makers in Taiwan due to a parts shortage. 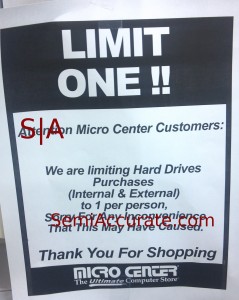 Both Samsung and Western Digital are sourcing parts such as head stacks and drive motors from suppliers in Thailand and because of the torrential rain that supply has been disrupted.  Also, both companies are restricting supplies to the retailers in order to avoid having PC manufacturers begin obtaining their drives that way.  Microcenter, based in the US, has already taken limiting steps as seen by their in store signs.

The supply shortage is also expected to impact the DIY market, which in turn will also hurt processor and motherboard manufacturers.  The shortage also represents a chance for the SSD guys to take a part of the market, if only they can get the pricing right.

Maybe what we need is a “cash for clunkers” program, where you get a government rebate every time you turn in an old drive and buy a new one ;-).S|A