Sandy Bridge-E is finally upon us, and for the first time in a long time, I find myself totally unexcited about a new CPU. This isn’t to say that there is anything wrong with Sandy-E, it is just hard to point to a real advantage it would bring over it’s predecessors to justify spending well over $1000.

Of the three, the 4-core 3820 is unquestionably the one to buy. There really isn’t any game that takes advantage of 8 threads, much less 12, but the extra clock speed will definitely be useful to everyone, and the 3820 will almost assuredly be much cheaper too. Any guesses why the 3820 is delayed and not unlocked? This Intel user fleecing by fusing off features and selling them back is getting really annoying. That said, the spec sheet looks like this. 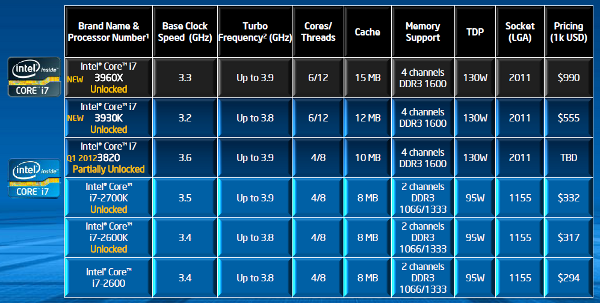 Sandy-E will definitely be the fastest CPU on the street, and it takes the crown from the current champion, the Intel Westmere-E, aka the 990X. It should handily beat both the older Westmere cores and the current Sandy Bridge iSomethingmeaningless CPUs by decent margins for everything other than memory performance. There, the four channels of DDR3 beat the three of Westmere and the two of Sandy sans-E, so if your app needs memory, Sandy-E should trounce everything.

What else does the -E bring to the table? The biggest thing is PCIe3-ish support. Like SemiAccurate exclusively reported a few months ago, PCIe3 is not official, but the chips will ship with 8GT/s turned on. When asked, Intel said that there were no cards to validate on, so the PCIe3 could not be tested and certified, but they feel it won’t have problems. SemiAccurate’s sources say that there were cards available, but no one expects any bugs to show up in the real world. Basically, don’t worry about it, if there are any bugs, they will be very obscure corner cases that are almost impossibly to stumble across in the real world. The proof of what happened will be when we see what the CPU stepping is when the chips eventually get that PCIe3 stamp. 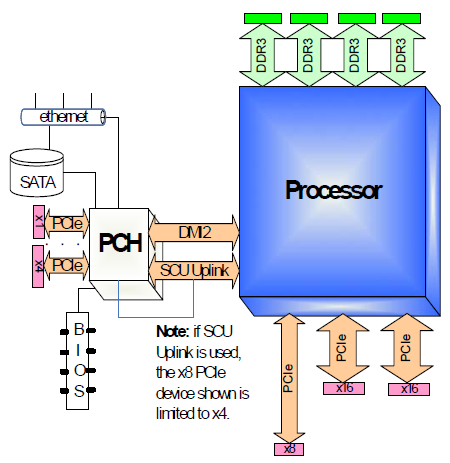 Lines and blocks, more than without a -E

Yes, you read that right, Intel is still desperately clinging to the hope that USB3 will go away and users can be further locked in and fleeced by Light Peak/Thunderbolt. Don’t let them know that their own X79SI board has a third party USB3 chip, Light Peak has no more light, doesn’t really work, hurts users, and Apple isn’t planning to use it for much longer according to our moles. Don’t tell Intel, they don’t know yet.

Other than that, Sandy-E is just a Sandy Bridge with six cores instead of four, and the graphics core that still doesn’t have functional drivers in any Linux distro, and barely works under Windows, is thankfully removed. This is perhaps the best part of the new chip, the lack of a broken GPU. That isn’t to say Intel is actually supporting Linux, there still aren’t any Linux drivers for any of the ‘advanced features’ of the chip, nor do we ever think there will be. Intel continues to chain themselves to an anchor that MS has already thrown overboard. *SIGH* 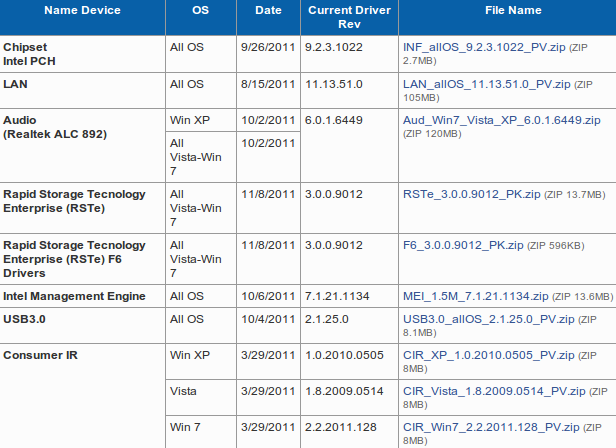 In the end, this is the biggest problem with Sandy-E, and why we simply can’t get excited about the chip. It is faster than everything out there, unquestionably. The drivers still suck, and there is absolutely no sign that Intel has any intention of fixing them, ever. The speed that you can use is incremental, and in almost every case, the bottleneck is somewhere else on the system.

This is the long way of saying that there really isn’t much of a use for the speed on the consumer front. Current CPUs have more threads than you can use, game performance is gated by crappy console ports, innovation stifled by a broken OS from the dark ages, and Intel cripples support for anything else. Useful features are fused off then sold back to you for more cash, and other things you need are simply not available at any price. Video processing is already faster than real time and is about the only thing that is CPU intensive enough to show performance gains on, even if they no longer matter in the real world.

And for all of this, Sandy-E, perhaps the fastest CPU ever made, is not exciting. Performance doesn’t matter any more, and Intel is still stuck on the performance train. The chip is a year plus late, and the world has moved their attention to Ivy Bridge. Wake me when Intel does something innovative that has functional drivers. In the mean time, the fastest just got incrementally faster.S|A