Exclusive: A sneek peek at the AMD VISION 2012 offerings

With a bit of digging, here is a sneak peek at the AMD VISION 2012 offerings. (NYSE:AMD)

So here is the AMD VISION 2012 lineup, basically what’s new?

The easiest thing to spot would be the AMD A10 series APU, since it’s positioned above the A8 series (as 10 is bigger than 8, duh?), we could easily draw an equal sign between A10 series APU and “Trinity”, the codename for the next mainstream-class (even performance-class) APU offering from AMD. Trinity will have 2 “Piledriver” modules, or 4 “Piledriver” CPU cores, a 7xxx series GPU codenamed “Devastator” which, in theory, providing 25% more shader groups over VLIW5 offering with the same shader count, and hopefully gets 25% more performance if the shader groups perform around the same. It supports faster system memory speeds to provide more bandwidth available to both the CPU cores and the GPU. Okay…

And then there is an E1 series, not sure if it’s a renamed E series or not, but the targeted audiences should be the same. So they should be Bobcat-based offerings, with a few tweaks to the CPU cores here and there (two more cores is kind of a tweak, too), with a GPU codenamed “Scrapper” sitting on the same die.

So here comes the fun little game that I mentioned in the subtitle. 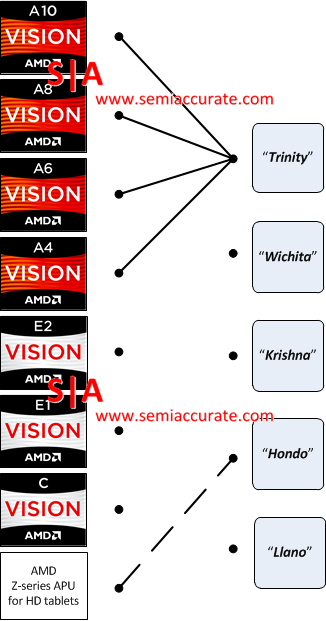 Complete the game by drawing straight lines to match the items from the left column to the right column, some of the items have been matched as example. The answer should probably be announced sometime between CES 2012 and Computex/AFDS 2012 if things goes well, no prizes will be given though.

So what do you think the E1/E2 series will be? Will it be based on the old “Llano” APU as previous rumor mills suggested, or it will be 32/28 nm offering, or it will be something else? One thing for sure is that AMD already has the answers. While 2012 will continue to be interesting to watch, too. S|A