Today IBM (NYSE:IBM) announced its ability to store information in as few as 12 atoms.  This compares to today’s disk drives which use approximately 1 million atoms for a bit of information.

IBM believes that the current technology scaling will soon reach it’s physical limit and so their scientists decided to work backwards attempting to figure out the smallest unit allowable atom-wise for memory storage.

They worked with an unconventional form of magnetism called antiferromagnetism. Ferromagnets have been in use for many years for conventional data storage.  However, scaling it down to the atomic level has been problematic because of the interaction of the bits next door. Call it magnetic leakage, political contributions, or just plain spillage.

According to Random Executive “The scientists at IBM Research used a scanning tunneling microscope (STM) to atomically engineer a grouping of twelve antiferromagnetically coupled atoms that stored a bit of data for hours at low temperatures. Taking advantage of their inherent alternating magnetic spin directions, they demonstrated the ability to pack adjacent magnetic bits much closer together than was previously possible. This greatly increased the magnetic storage density without disrupting the state of neighboring bits.” 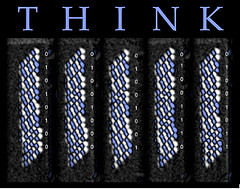 This image demonstrates a magnetic byte imaged 5 times in different magnetic states to store the ASCII code for each letter of the word THINK, a corporate mantra used by IBM since 1914. The team achieved this using 96 iron atoms − one bit was stored by 12 atoms and there are eight bits in each byte.

Pretty info-graphics, animations and additional research information can be found here. All of this leaves us wondering how fast can they commercialise this research?S|A

Latest posts by Newsdesk (see all)