Why Onlive’s desktop is better than the rest

GDC 2012: If you can game tolerably, you can type tolerably

Note: This is Part Two of the story. Part One can be found here.

Back to Onlive, they have a built out network of massive gaming computers on a low latency network, clients that run on just about anything you need them to, and it actually works in the real world. The workload is heavy evenings and weekends, so during the day, the plan is to rent a desktop to users on the run, flash on an iPad, AutoCAD on a smartphone, and just about everything you want running on any device with a TCP/IP and a screen.

During GDC, we had a chance to play with an iPad running the service, and it did just what it said. Even over the Moscone Center’s notoriously flaky Wi-Fi, we could browse, watch flash video, and do everything we wanted in a full desktop environment. If you look at the screenshot below, you can see some pretty hefty bandwidth numbers, but moments before we were getting more than 300Mbps from another box. It is like having a PC in a data center, mainly because that is what it is. 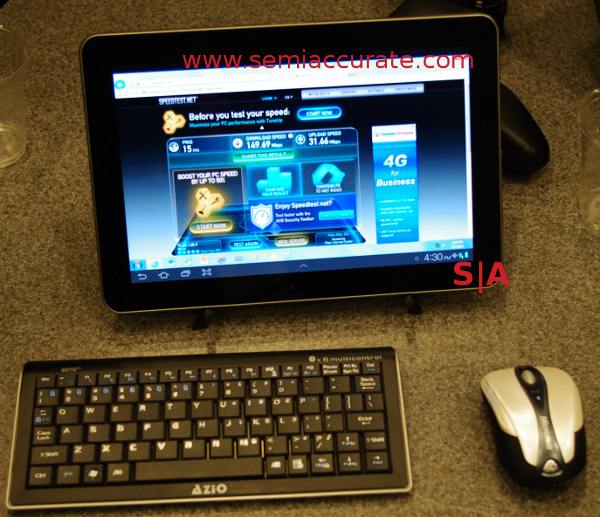 The plan obviously has merit, a lot of real merit. Why? Because Microsoft launched a frivolous shakedown blogpost threatening legal problems to stifle it or tax it into financial in-viability. One of the surest signs of inherent goodness in the technology world is a Microsoft glowering look like this, and Onlive is the latest one to be so blessed. You know Microsoft is in panic mode because it doesn’t have a real answer to counter an emerging competitor that makes their own offerings look as broken as they actually are. Again.

Renting a desktop isn’t the important bit though, it is more a stunt than anything else. It may be a damn useful stunt, and a great one at that, but the real killer app is yet to be seen, the corporate version. If a simple rent-a-desktop got Microsoft’s knickers in a twist, this one will have Ballmer on the floor twitching. Why? Imagine a gaming-spec PC on a low latency network, fast enough for tolerable gaming at a distance, with a hypervisor. Imagine it sitting there doing, well, not much of anything during prime working hours.

Now imagine Onlive going to a Fortune 500 CxO and pitching a low cost PAAS (Platform As A Service – it is a real acronym, I didn’t make it up, honest) offering. The retort is usually, “No way because….”, and the concerns voiced tend to be lead by performance, security, cost, and corporate viability. Onlive is the only one that has all of these points nailed.

For performance, you have gaming PCs on a network that is lower latency than just about anything else out there. The PC hardware is updated on a gamer/enthusiast upgrade cycle, not a corporate ROI cycle. The boxes are likely much faster than what the company has deployed to it’s faceless drones now, and the network is fast enough to game on. If that isn’t fast enough to do corporate work, what is? One of four concerns nailed.

Cost is easy enough, think fully subsidized and paid for hardware, bandwidth, management, and all the rest. Buildout, maintenance, and management costs of not zero, but electricity plus incremental time, far far less than any cloud provider would need to pay for lesser hardware. If Onlive can’t price their offering under the market and still make money, I don’t know who can. Two of four nailed.

Corporate viability is a little trickier to prove, but Onlive is currently a viable company with real products on the market, and real revenue. To top it off, corporate management is not exactly a bunch of no-name n00bs. Given both track records, CxO concerns about viability should be minimal if not zero. 2.9 of four nailed.

The last sticking point is always the hardest, security. Encryption over the wire is not a big deal, SSL, HTTPS, and other protected transport mechanisms are old hat now, and they make the transit itself non-problematic. More concerning for a CIO, CTO, or CSO is security of the data on the servers themselves. Trusted boot, AES-NI, and encrypted drives make the box itself fairly impervious to casual onlookers wandering the data center aisles, but it doesn’t stop anyone with access to the keys from being nosy.

If you think data centers are secure, just go ask Kim Dotcom how life is of late. Data center security and encryption is only as trustworthy as those who control the keys. This is why every real effort to do business in the cloud is stunted, there is no real security. If you company is covered by HIPPA, SARBOX, or any other related law, you are pretty much shut out of services like the ones Onlive is offering. Olives may encrypt everything, but the key ownership is still a rather fatal sticking point.

This is where Onlive does things right, and as far as I am aware, are the only ones to do things right. The “key problem” isn’t a problem because they don’t control them, the enterprise does. Onlive can’t peek at the data any more than a random intruder wandering the aisles of the data center. They provide the enterprise customer with a VMM and have no idea what is running on the box. The VM is just a large encrypted file on the HD, what it contains is opaque to them. Microsoft license worries? Not their problem, the customer has licenses, and any audit will come up blank. Feds bending the rules will get no more satisfaction than a hacker, Onlive can’t sell a customer out if they wanted to. 3.9 out of four nailed.

In this, Onlive is unique, the only one on the market with all the pieces in place, working, stable, and secure. If what they have is good enough for gaming, it is surely good enough for corporate environments. Potentially, they have a killer offering here, and the pedigree to carry it out in a credible way. This is the killer app for the cloud, and it lets you interactively do anything you want from word processing to GPGPU tasks. No wonder Microsoft is petrified.S|A

Editors note: You can learn more about this type of material at AFDS 2012. More articles of this type can be found on SemiAccurate’s AFDS 2012 links page.  Special for our readers if you register for AFDS 2012 and use promo code SEMI12, you get $50 off. Early bird registration ends April 8th.