The lads at Sapphire have been busy of late, the guys are stepping into not one, but two new markets. Did you know they made CPU coolers and video conversion widgets?

Once into their inner sanctum, also known as a booth, the first thing we saw was a new CPU cooler. Meet the first of the new Vapor-X coolers from Sapphire. There was a prototype shown off at previous shows, but this is the first production model the company has bandied about in public. 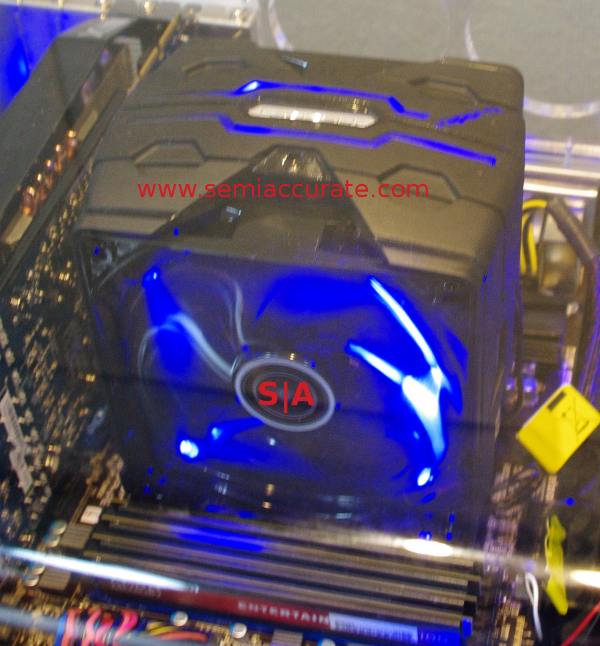 Cooler behind the anti-photo case

The cooler is aimed at the overclocking market and should dissipate 200W or so safely. It wouldn’t be Sapphire without a huge vapor chamber in the base, and this part has exactly that. It will be on sale in a month or so, and this one has a universal CPU mounting bracket. The Vapor-X has an MSRP of around $69, so less than that in stores. 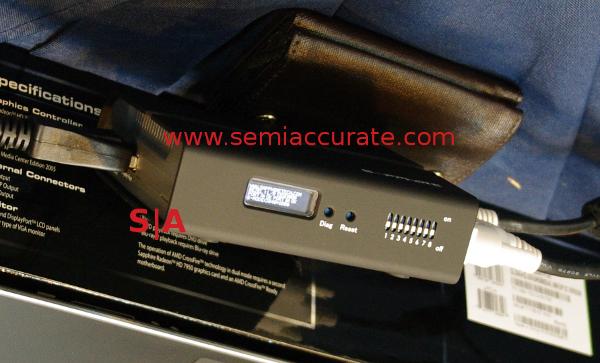 Wallet and gravity inverter not included

Another departure from the expected is the line of video conversion widgets. The idea is pretty simple take a DP or DL-DVI input and split it in to two DVI outputs. The device fakes a single large, 3840 * 1080 in this case, monitor, so you could potentially have 12 outputs from a single AMD GPU. The DIP switches are also a really neat touch, you can pick formats and do bezel correction in hardware, no finicky or OS sensitive software to cause problems. It can also clone video in hardware, something MS doesn’t want you to do anymore. Expect these to come in around $169 real soon.

Next up we have two Trinity motherboards, the Pure Platinum A85XT MB is a full size board with two 16x PCIe slots. Sapphire won’t say what chip goes in to it, nor what chipset it sports, but if their naming convention holds, look for a tweaked A75 called A85. Feature wise, the A85 doesn’t seem to add much if anything, so don’t get your hopes up. 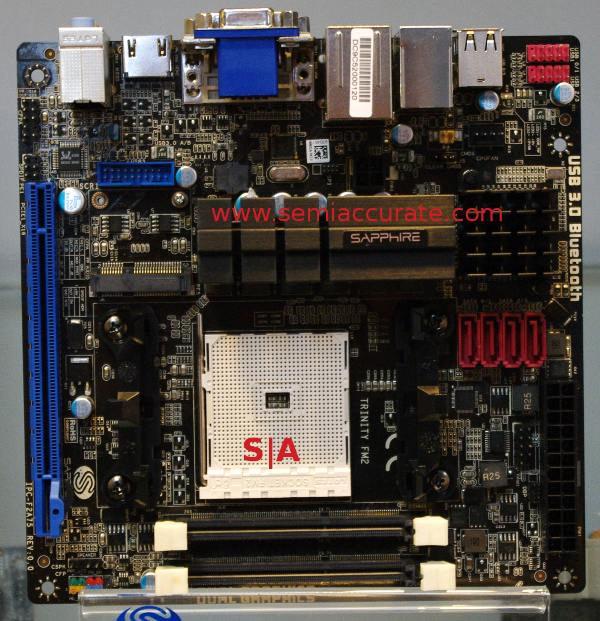 A lot more interesting is a micro-ATX Trinity board that could be the killer media center box for the next year or so. There wasn’t any documentation around this board, but the markings on it say IPC-F2A75. Don’t be surprised if that changes before launch though. It is a tiny board that trades off full size DIMMs for a 16x PCIe slot. There are tons and tons of USB 2 and 3 ports, so this with a 25W Trinity will make a killer home theater rig.

It wouldn’t be Sapphire without new GPUs, but since AMD hasn’t announced anything new yet, there isn’t much to talk about. There is an HD7870 Flex, Sapphire code name for two full DVI ports. If you need this configuration, as most people do, the 7870 is the most powerful card you can get that doesn’t need annoying conversion dongles.

Moving a bit higher up the stack, we have the 7970 6GB Vapor-X GPU. Should you find 925MHz and 3GB of GDDR5 too limiting, this card should hit 1100 reliably and has twice the meagre RAM limit of normal 7970s. 1100MHz is not a trick with most 7970s, but marketing dictates playing it safe. Expect quite a bit more if you have a clue what you are doing.

Asking Sapphire the obvious question of what is coming next, they didn’t say much. They didn’t know clocks for Tahiti 2, nor any clue when the parts were due. That said, they probably did know something, when we pointed out that Vapor-X was the second highest line they make, and there was no Toxic 7970, they just smiled. A lot.S|A