A Review of Tahiti 2

Once again AMD is executing another mid -generation high end refresh with the launch of the HD 7970 GHz Edition. It has been about six months since the launch of the original HD 7970 graphics card. Surprisingly little has changed in the graphics market in the intervening time. AMD has completed the roll out of its 7000 series product stack with the launches of both the Pitcairn and Cape Verde chips and a bunch of re-brands in the entry level segments.

As far as competition goes Nvidia launched its GTX 680 offering right into the $500 territory of the HD 7900 series back in April. Unfortunately the GTX 680 elicited only a small price correction from AMD with some HD 7970 models dropping to just below $500. Additionally, almost constant supply problems have plagued Nvidia’s GTX 600 series of parts up until just recently. A quick check at Newegg showed that there are actually quite a few GTX 680 and GTX 670 models in stock, although the GTX 690 is still MIA. The one really meaningful reaction from AMD in response to Nvidia’s high-end assault has been the three for free promotion.

The $500 HD 7970 GHz Edition is the first product that AMD has released in the wild since Nvidia began launching its own competing products. As such we’re pretty confident that the clock speeds of the Ghz Edition have been selected with the sole purpose of retaking the single GPU performance crown. But we don’t have a GTX 680 in our orbital labs to test it against, so instead we’ll be trying to find the absolute limits of the HD 7970’s gaming abilities.

As far as games go, we’ll be using mostly older titles like Relic’s Company of Heroes and the original Crysis. But we do have a few newer titles such as Side Meir’s Civilization 5 and DICE’s Battlefield: Bad Company 2 to round out our suite.

Now as Charlie covered in his article on Tahiti 2 a few weeks ago, the HD 7970 GHz Edition is just a better bin of the same HD 7970 chips that we’ve come to know quite well. Thus one of the metrics we’re most concerned with evaluating is the overclocking capabilities of this new bin. We’ll have more on that topic in a later article. But for now let’s get down to the numbers.

First up we have the original Crysis. Now this is a game that has, at least graphically, largely stood the test of time.

For our single monitor testing we decided to compare the different levels of anti-aliasing available on our HD 7970 Ghz Edition sample. Although the value of using the in-game anti-aliasing in Crysis is limited due to the way the game blurs backgrounds and textures when AA is applied. Luckily post processing filters like MLAA don’t have the same effect and offer similar quality on the edges that really do need to be blurred. 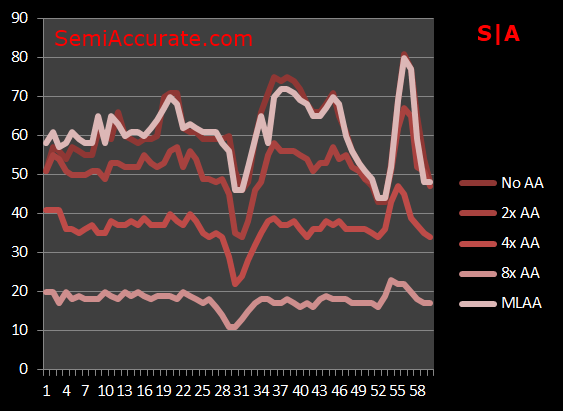 As you can see in the graph above using MLAA causes only a small to non-existent decrease in performance. 2x AA on the other hand drops frame by a sixth, 4x AA causes a large drop in performance, and 8x AA moves Crysis into the still playable, if rather stuttery range. Of course we’re running Crysis at its very high preset during all of our testing. 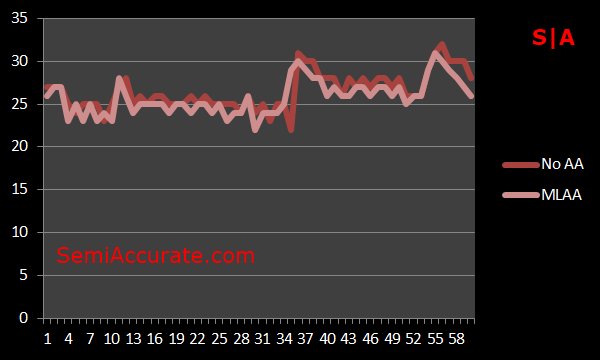 Moving to our Eyefinity configuration we found that the game was playable at the very high preset with MLAA enabled.

Our next game is Relic’s Company of Heroes. Without AA the HD 7970 Ghz Edition just chews right through this game and spits out around 120 frames a second. But as we dial up the AA levels this game starts to really strain the GHz Edition. 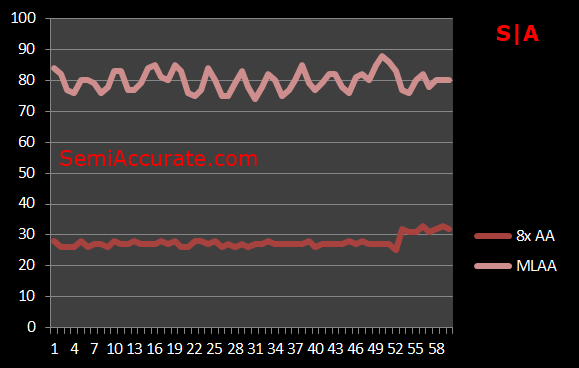 Frame rates dropped into the thirties when we enabled 8x AA, luckily the hit for using MLAA is far smaller, and the HD 7970 GHz Edition was able to provide us with around 80 frames per second. 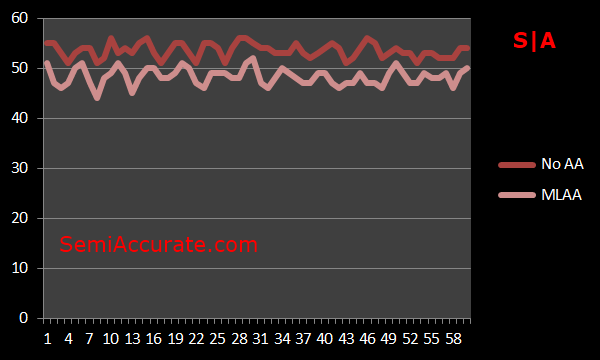 Moving to Eyefinity testing, frame rates fall by about half in Company of Heroes. Again the hit for using MLAA is really quite small even at these super high resolutions.

Battlefield Bad Company 2 is the next game in our suite. It was specifically targeted by AMD developer relations program for Eyefinity support a few years ago, and as such we’re expecting it to do quite well. 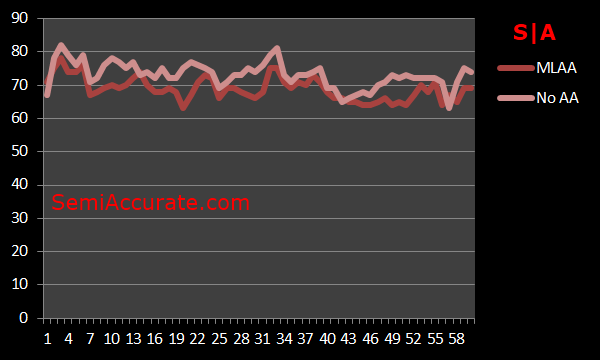 So in Eyefinity mode the GHz Edition is able to provided us with about 70 frames per second with or without MLAA enabled. 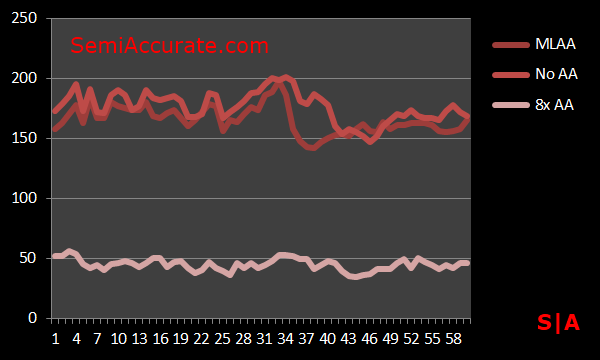 Our next game is Valve’s Portal 2. The source engine really doesn’t take all that much graphical horsepower to run these days, so we’re expecting pretty high frame rates. 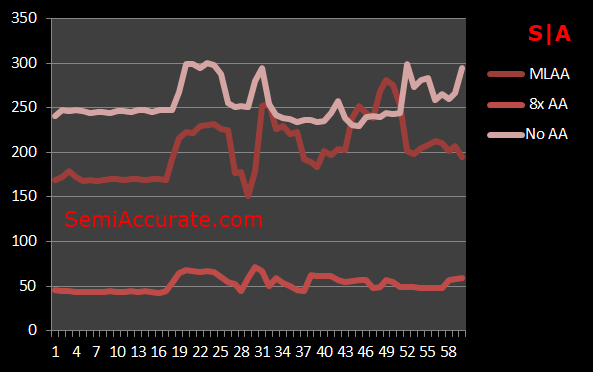 In a single monitor configuration we can see that no matter what AA setting we chose Portal 2 was playable at max settings on the HD 7970 GHz Edition. 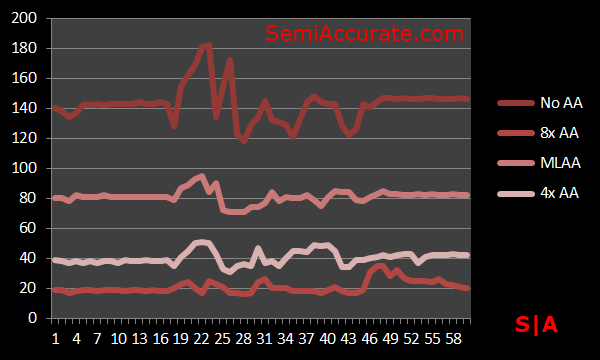 The situation changes a fair bit as we scale Portal 2 up to Eyefinity resolutions. At the highest AA setting Portal 2 is barely playable, but once you drop down to 4x AA or below the game experience becomes perfectly fluid.

Civ 5 is the one turn based real time strategy game in our suite. It supports DX 11 and direct compute however so we’re hoping to see a respectable performance level out of the HD 7970. 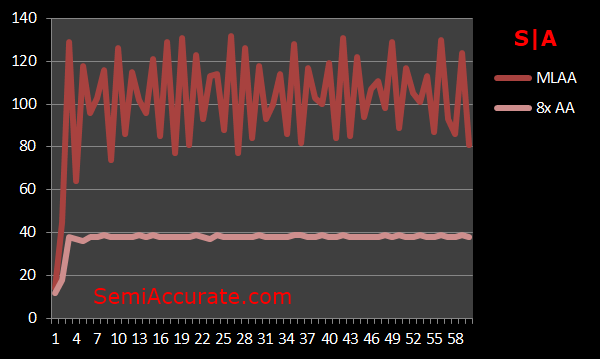 Frame rates stayed well about 30 frames per second even with 8x AA applied, in a single monitor configuration. Don’t read too much into the frame rate drops and jumps because our benchmark works by zooming in and out of the game map repeatedly, which for the most part causes these jumps and dips. Due to time constraints we had to skip testing Civ 5 in Eyefiniy mode, but a brief run through with MLAA enabled provided playable frame rates.

We ran Deus Ex: Human Revolution for long enough to realize that the game was just not a strain on the HD 7970 GHz Edition. No matter what AA level we chose we could not get it to drop below sixty frames per second, on a single monitor.

What’s Playable, and What’s Not?