LSI is the first out of the gate with PCIe3 SAS-6 HBAs, and is promising a full line of PCIe3 RAID cards soon too. If you want more speed, it isn’t SAS-12 yet, but it is a good step in the right direction.

The three cards that are out today are the HBAs, and all are based on the LSI 2308 ASIC, basically a PCIe3 version of their second generation SAS-6 chip. These three cards are all part of the SAS 9207 line, and each supports eight drives. Variants are eight internal ports, eight external ports, and four internal plus four external. They append a -8i, -8e and -4i4e to their respective cards, no points for figuring out which is which.

If you want hardware RAID, in our opinion using RAID on this level in software or firmware is borderline irresponsible, you will have to wait a bit. The PCie3 SAS-6 MegaRAID line isn’t coming until Q3, but they are talking about them now. If you take the 2308 chip, add two 800MHz PowerPC cores and a GB of cache, you have the heart of the new MegaRAID line. There are three new families, the 9270, 9271, and the 9286. 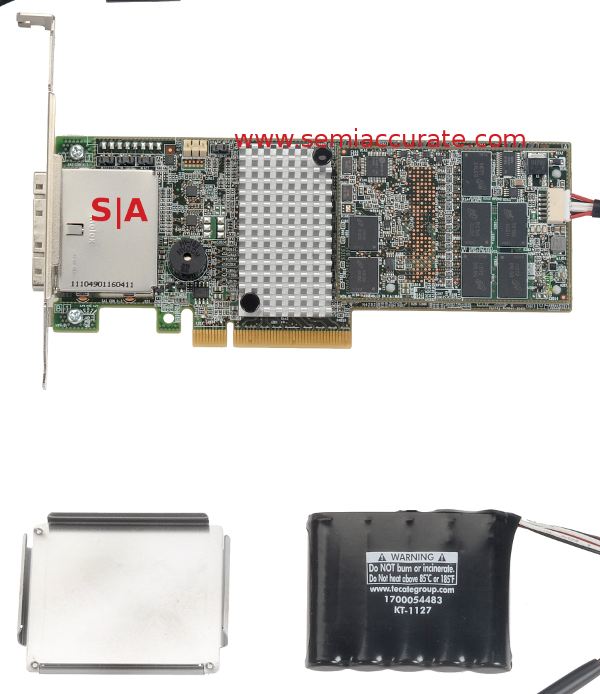 The basic PCIe3 MegaRAID card is the 9270-8i, an eight internal port RAID adapter, and it is the only one of it’s line. There are three 9271’s though, a -4i, -8i, and an -8iCC. All have internal drive ports, but we are not sure what the CC stands for, possibly the battery backup pictured with the card.

Above these sit 9286 trio, and they are all 8-port external solutions. There is the expected -8e, followed by a 9286CV-8e, and a 9286CV-8eCC. The CV however is called CacheVault, basically their flash cache backup, and the CC suffix is just as opaque as it was last paragraph. If you hate trying to figure out how to schedule downtime to change the battery backup on a high availability server, flash backups will make life notably less painful.

In the end, if you have an Intel Romley box, but not an AMD based server this year, these new MegaRAIDs are worth a long hard look. We can say that from experience, this article is being run on a Romley server that is using an older generation of LSI SAS-6 MegaRAID chip, and the combination more than halved our average page served time. Adding PCIe3 SAS controllers probably won’t drop the serving time any more, but it would be fun to try it and find out.S|A