Yesterday, AMD released the first public beta of its CodeXL software debugging and profiling tool. We covered AMD’s original announcement of this tool back in June at AMD’s Fusion Developer Summit. CodeXL is a big step forward for AMD’s developer relations efforts. With CodeXL essentially anyone can profile both the CPU and GPU code execution of their application. Additionally, CodeXL allows developers to debug both OpenCL and OpenGL code, and has the ability to do static kernel analysis, which can accurately estimate how your code is going to perform without compiling it.

In the grander scheme of AMD’s HSA Vision, CodeXL is an intermediate step that is designed to allow developers the create applications that are tailored to take advantage of the resources that AMD’s APUs have to offer. CodeXL is aimed at helping developers create applications that are both CPU and GPU accelerated, rather than just GPU accelerated or purely CPU based. In the simplest terms AMD’s CodeXL is the best tool available for profiling and debugging OpenCL code on AMD platforms.

Outside of the merits of its basic functionality, AMD is setting CodeXL up for success by developing three different version of the tool. There will be a standalone version for Windows, another standalone version for Linux, and a third version that is a plugin for Microsoft’s Visual Studio development environment. 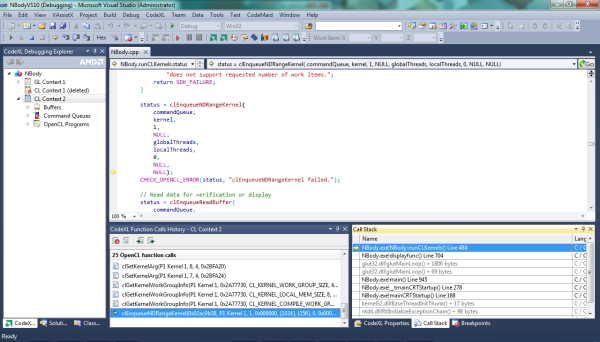 Up until now the OpenCL and GPU acceleration melody that AMD has been playing to developers has been handicapped by a lack of good tools to get the job done. In his keynote at this year’s AFDS, Adobe’s Tom Malloy talked about how the only people that are currently using GPU acceleration are a small subset of developers that he called ninjas. With CodeXL AMD is making GPU acceleration a viable option for a larger audience, while at the same time making life a lot easier for these code ninjas. We are still a ways off from having a high-level language for systems with a unified memory address space as Mr. Malloy envisioned, but CodeXL does address the here and now aspect of enabling more developers to take advantage of GPU acceleration.

Now this release of CodeXL is still just a beta, so there are a lot of little problems and known issues in AMD’s release notes. But despite the unfinished state of the program, it’s clear that AMD is on to something with CodeXL.S|A