The last keynote of IDF was a breath of fresh air, in a turn of form, Intel talked tech! Justin Rattner was talking all about radios, so you can see what is on Intel’s mind for the mid-term future.

Three main topics were presented at the keynote, digital silicon radios, wi-fi docking, and centralized LTE base station computation. Of the three, the first was very interesting, the latter two seemed more of a sales pitch than a technological advance. That said, the change of pace was certainly refreshing.

Intel has been talking about digital radios for a long time, it is the holy grail of current silicon development. Doing analog radios in silicon is not a real trick and hasn’t been for years. If you have a cell phone, you probably have half a dozen analog radios in your pocket. What concerns Intel is doing a radio digitally.

The solution according to Intel

Intel is so keen on digital radios because the mainstay of their business in shrinking transistors every couple of years. This leads to higher performance, lower costs, and more bang for the buck, watt, and nearly every other metric. Intel has a clear lead over the entire industry here, so doing radios in silicon is very attractive.

One minor problem is that radios now use large amounts of analog circuits, not digital. Mixing analog and digital circuits on a chip, while quite possible, can be problematic to do. This headache is by no means a showstopper, but it involves another set of compromises that would be vastly more efficient to avoid where possible.

More important is the major problem, analog circuits don’t really scale down in size. In fact, shrinking an analog circuit can often lead to lower performance, lower tolerances, and more fabrication headaches than making it larger. If an analog circuit took the same die area as X transistors, a shrink will mean the same functionality now takes 2X transistors worth of area. This is seriously diminishing returns for the maker.

The entire industry is very keen on making a completely digital radio. Some parts will have to remain analog, but this theoretical minimum is a very tantalizing goal for many reasons. There has been a lot of talk, but no one has demonstrated one publicly yet. At the third keynote, Intel did just that, they showed a fully digital Wi-Fi radio that looks like this. 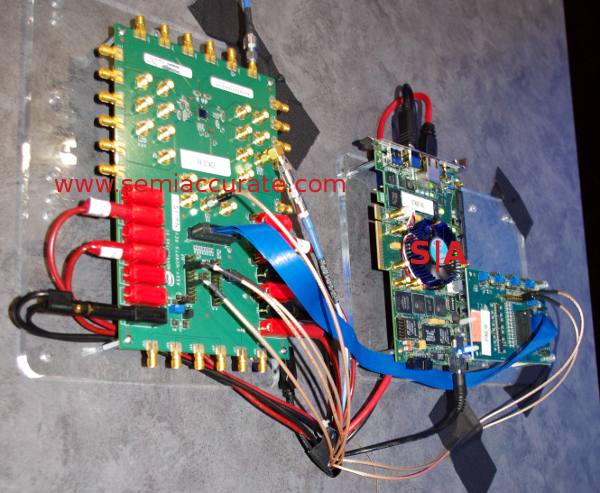 The boards that are the radio

The chip that powers it all is called Rosepoint, a dual core Atom with a fully digital Wi-Fi radio. Intel has identified four major parts to be converted from analog to digital, the Sigma Delta ADC, Digital Frequency Synthesizer, Digital RF Power Amplifier, and Digital Phase Modulator. The Flux Capacitor will have to remain analog until 2015.

Now that the problem is solved, or at least a solution demonstrated, Intel plans to roll out the four major chunks one at a time as they become technically and financially viable. During the Q&A session following the keynote, Rattner said that the radios were roughly comparable in area and performance to current analog devices, but they were far from optimized. Rosepoint is a technical demonstration, not a product, so we have no doubt it will be implemented far more efficiently in the future. The current parts are 32nm, and if they line up favorably against analog components now, 22nm and 14nm digital radios should have a serious cost advantage over analog.

More important than the sheer cost and die area is flexibility. If you think about it, analog radios have a limited range of frequencies that they can address. A digital radio should be able to provide far greater ranges, possibly even doing multiple frequencies at once. In theory they would not only be smaller but you could potentially have one digital radio instead of a half-dozen analog devices. Hopefully it will all pan out, the promise is quite enticing.

The second main portion of the keynote was wireless docking with Wi-Gig and a few related wireless concepts. Lets just say that there wasn’t much in this for the hardcore geek, wireless docking is a yawner, good luck with it in a cube farm. Several other related concepts like video aware networking and power aware radios have been presented several times in the past by Intel, they aren’t really much more than interesting firmware hacks.

Last up was Intel’s pitch for consolidating LTE processing for a series of cell towers in a centralized location to save power and boost performance. Instead of a CPU crunching LTE packets at each tower, you send it all to a central location where a bunch of servers crunch the numbers centrally. In a fortuitous lining up of technology, those central servers are all Intel powered instead of dedicated hardware in the base stations.

Needless to say, SemiAccurate is not convinced that this will be a good thing when you take all the overhead in to account. Is pushing all that data across a MAN or WAN and crunching the numbers in a single rack better than bespoke silicon at a tower? Moving data like that isn’t free, nor is the added cost of the network.

That said, given the power use of the first generation LTE hardware, base station or end user radio, it isn’t hard to see how you could beat that. A Xeon or 12 up against a second or third gen LTE base station chip is a very different value proposition. Given a non-stacked deck, it would take a lot of convincing for the author to buy the ROI proposition Intel is talking about, but it could be possible.

In the end, the radio keynote was amazingly good. Silicon was mentioned, actual tech was discussed, and the advantage Intel has over everyone was made clear. It is everything a keynote should have been and everything the rest of IDF wasn’t. Social networks, moronic touch UIs, and nebulous security threats were completely absent, I wonder who will be reprimanded for that snafu?S|A