Desktops are so old hat…

Today AMD launches their new Richland APU. We’ve covered most of what Richland is and isn’t in prior articles, but it’s worth going over some of the finer points again. First off Richland is the replacement for 2012’s Trinity APU, and it’s launch marks the official end of AMD’s Vision branding. The underlying microarchitecture found in Richland remains largely unchanged from what was in Trinity. Both chips have two Piledriver modules and a 384 core VLIW4 GPU, but Richland differs from Trinity in two key areas, power management and process improvements.

AMD’s engineers spent quite a bit of time looking how they could reduce power consumption for specific workloads. Chief among those workloads was video playback where AMD says that they were able to reduce CPU power consumption by 47 percent compared to an equally matched Trinity laptop. Additionally, AMD was able to bring power consumption down to under one Watt at idle with Richland.

To put this in perspective, AMD’s Trinity was already competitive with Intel’s Ivy Bridge mobile parts, so these power reductions should allow Richland to convincingly beat Intel’s current parts in some scenarios. It will be interesting to see how Intel’s Haswell changes this competitive landscape, but for now we’ll just have to wait until Intel is ready to launch. In any case, Richland consumes significantly less power than Trinity, both at the APU and platform level. 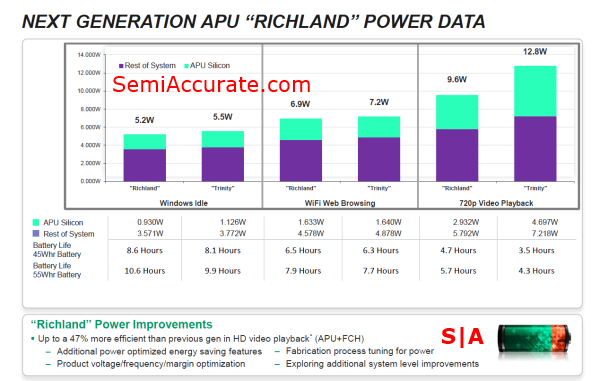 AMD has also increased the granularity of Richland’s power management by adding more P-states. These new P-states allow the micro-controller to pick a more optimal point along the frequency/voltage curve making Richland more efficient for many workloads.

We’ve all become accustomed to seeing clock speed bumps with new silicon revisions, and Richland is no exception to that pattern. Within a given power envelope AMD says that it can clock Richland between 100 and 300 MHz faster due to a combination of greater headroom thanks to process improvements and more aggressive turbo boosting.

Speaking of boosting, AMD is finally getting around to implementing temperature based turbo. For some time now Intel has allowing its chips to dynamically take advantage of extra thermal headroom to maintain their boost clock speeds for longer periods of time. AMD on the other hand had been limiting the duration that its chips spent in a boosted state based on a number of assumptions about the cooling solutions OEMs were using, rather than upon real-time data. Thanks to an upgraded network of analog thermal diodes AMD’s micro-controller can now dynamically adjust clock speeds based on both the power consumption of the chip, and the thermal headroom of the cooling solution. 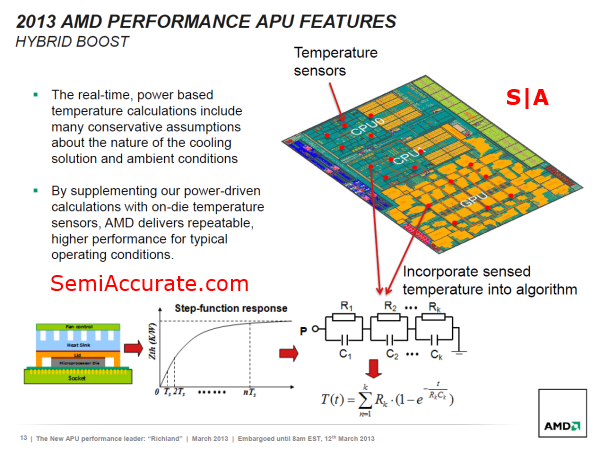 One of the more clever ways that AMD has optimized its power management technology is called intelligent boost. In AMD’s prior APUs the power management system had been set to deliver power to whatever component wanted it. In certain scenarios bottlenecks can occur where one component can’t feed another fast enough. In cases like these AMD realized that there was no reason to allow a bottlenecked component to sit idle in a high power consumption state when it could be down clocked and still offer the same level of performance. In practice this means that GPU will avoid boost states or even down clock when it’s being bottlenecked by the CPU which should result in significant power savings. 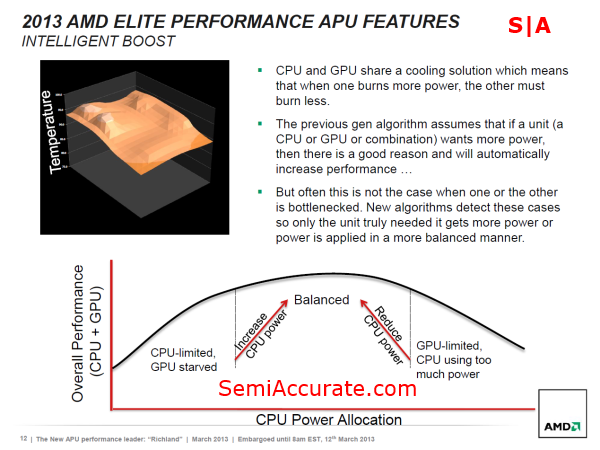 Another interesting advancement in Richland’s power management technology is a feature pilfered from AMD’s server products known as configurable TDP. AMD is hoping that by giving OEMs the ability to pick exactly how much power they want an APU to consume, they will use AMD’s chips in more creative form factors. It will be interesting to see if anyone takes them up on that.

Looking at just the four SKUs that AMD is releasing today, you’ll quickly notice that these are all 35 Watt standard voltage parts. AMD has confirmed that it is planning on rolling out 25 Watt and 17 Watt parts before the end of H1 2013, but we won’t be seeing any today. Within the next month we should be seeing Richland based laptops start hitting the shelves. Since they are pin compatible, and essentially only need a BIOS update, the changeover from Trinity should be swift.

One of the places that AMD has really stepped up its game with this launch is on the software front. AMD has partnered with ISVs to bundle a number of applications with each of its chips. These apps, like AMD Face Login, are licensed to OEMs with each APU and then the OEMs can choose whether or not they want to install them on the final system. AMD is hoping that OEMs will use these software features to differentiate their offerings from Intel based systems. 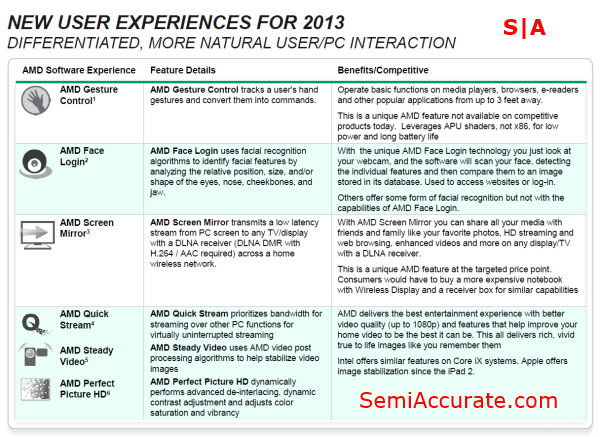 The most interesting part of AMD’s software features is Gesture Control. Using the 720p webcams that come with almost every laptop on the market these days AMD is enabling users to control their system merely by moving their hands. If this sounds a bit gimmicky, well that’s because it is. But AMD made it very clear that this is just the first phase of the Gesture Control roadmap. So there’s little doubt that we’ll see another iteration of this app when Kaveri comes to market at the end of the year. Whether or not Gesture Control is going to catch on remains to be seen, but for now AMD is allowing users to take a baby step into the ‘future’ of natural user interfaces.

Although it’s not mentioned as a new user experience, AMD’s own Wireless Display implementation is coming to market with the launch of Richland. AMD went so far as to boast that they have lowest latency and best quality wireless display solution on the market, thanks in part to the Miracast standard. With that in mind, we’re looking forward to trying it out.

Over the last year Intel has held a pretty significant advantage in regards to one check box feature, Rapid Start. This technology is the brand name for a number of BIOS optimizations that allow Intel based laptops to boot faster, and come out of stand-by instantly. AMD is now matching Intel’s Rapid Start with what they call Start Now technology. Although I’m sure there are differences in the exact implementation, they both effectively reduce the amount of time required to boot or resume the OS. One of the cooler things about AMD’s implementation is that the WiFi will automatically reconnect as soon as the systems starts coming out of standby rather than after the system gets into the OS. [Editor’s note: If you’re booting from Linux it doesn’t take eternity to boot, thereby negating the need for engineering resources to be wasted on such features.] 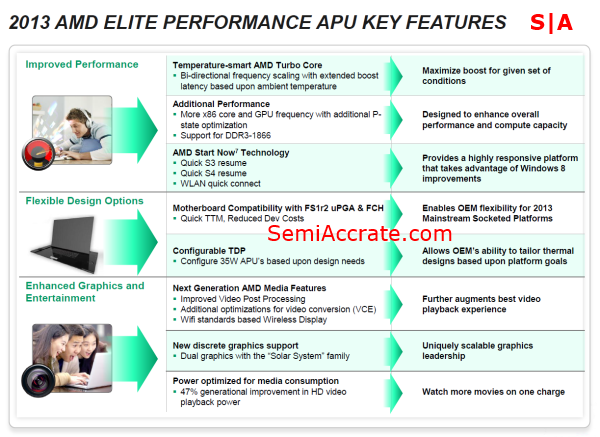 Of course AMD is once again allowing OEMs to add-in a discrete graphics card for mobile Crossfire configurations. The twist this time is that the new Solar System family of mobile GPUs is supported by Richland systems. Outside of that AMD didn’t have much to say on the APU/GPU Crossfire front.

Richland is, at its most basic level, a re-spin of Trinity that bridges the gap between that 2nd stage of the HSA roadmap that Trinity introduced, and the 3rd stage which is Kaveri. If it hadn’t been for all the churn going on at AMD over the past two years Richland probably wouldn’t exist, but it is what it is, and AMD seems to be trying to make the best of it. It may sound a bit odd at first with the slew of power management improvements and other features that I’ve discussed so far, but Richland is arguably the least important product that AMD will be launching before the end of Q2, Temash and Kabini will likely have a far greater impact on AMD’s future. So as interesting as Richland is, I can help but feel some anticipation building for those other products.

At the end of the day, Richland will live or die by the quality of the laptops that the OEMs bring to market. No amount of new software features or power optimizations can help AMD; if the OEMs decide to handicap their notebooks with low resolution 15.6” screens, small batteries, and shoddy build quality. You’ll have to forgive me if I seem a bit jaded, but premium quality AMD laptops are a rare breed. Even with the recent string of good quality mobile products from AMD, this is a fact that largely has yet to change. Maybe the OEMs will get their act together this time around, maybe not.S|A