Forbes is comparing the MiiPC to the Xbox 360 mainly on the grounds of parental control features. They announced the winner was the MiiPC, but we beg to differ.

MiiPC is a Kickstarter project started by ZeroDesktop, Inc. It aims to be an inexpensive $99 PC for kids and families. The MiiPC is equipped with a Marvell New Armada Dual-core SoC running at 1.2 GHz (Marvell ARMADA 1500 HD Media Processor, the same media processor as Google TV), 1 GB memory and 4 GB flash storage (options for 2 GB memory and 8 GB flash storage are also available), all running Android 4.2 for an operating system. It has an altered UI for traditional keyboard and mouse inputs, something that vanilla Android lacks. The MiiPC chassis is available in two colors: glossy white or metallic silver, and the delivery date is expected to be in third quarter 2013. The official timetable is below. 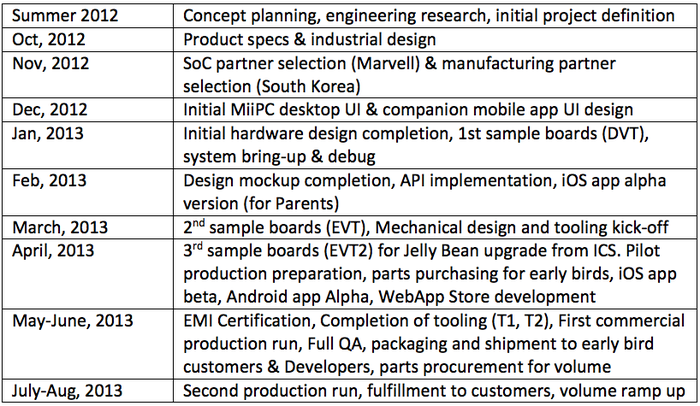 With the current Xbox 360, parents can give their kids a child account with a set time limit on using the console per-day or per-week in 1-hour intervals. The usual ESRB rating for games, coupled with a already dead subscription-based Xbox Live content and privacy management mechanism based on ESRB for games and MPAA ratings for movies are there too. You can add exceptions for specific explicit or inappropriate content blacklisting and there is Xbox Live related restrictions as well, for instance purchasing items or accepting friend requests. A 4-pin password is used to delay or remove the time limit and change any of the parental control settings in the Xbox 360.

With MiiPC, the same type of multi-user environment is featured, and the accompanying app allows parents to monitor the kids. They can watch the time used per app and the time for the whole PC session, and parents can install additional apps onto the PC or decide if installing apps from SD cards is allowed. Parents can also review the list of apps and websites used by the kids, and give authorization per app/website available to all or any of their kids. By swiping the switches, the time limit function also extends to each of the apps/websites, alongside the timer for the whole PC session. Older kids can voice their opinions through the MiiPC app with the parents on the white-listed apps/websites and time limit associated, while the parental account on the PC is protected by ordinary passwords.

The plus on the MiiPC-side would be a less complicated setup, parents doesn’t need to setup another Live ID with personal information and mark it as a child account as in the Xbox 360. It also increases the difficulty for kids to change the settings, and the parental control solution costs parents basically nothing (except time, but it would be greatly reduced). Things could get interesting if the kids have access to the parents’ phones or know the unlock passwords/patterns because that is where the Android control app runs. Unfortunately the ability to restrict Google Play/in-app purchases were not addressed in either the Kickstarter project page or the official webpage, so the only hope for parents would disabling Google Play altogether for the younger kids accounts.

The MiiPC solution looks pretty nice with the added flexibility, but only in an ideal situation. Would things always happen this way? We highly doubt that, kids are usually more adept at using computers that the parents guarding them. Things could get ugly with a few misunderstandings is in the equation too.

Picture this, the parents think a particular app is ‘bad’ and the parent-child relationship is nowhere close to the word ‘good’… So the parents force close the app, or force the PC to shutdown when they see the kid running that bad app. So parents control what to install on that thing, which apps can be used for how long and what goes to the shredder? Good for some control freak/helicopter parents but not exactly usable for the child. Moving the same conversation (or heated argument) through the app, onto the cloud, remotely rather than face to face doesn’t fix any of the basic parenting problems, it just avoids them.

Other than that, it is pointless, regardless of the operating system or the hardware in general, to think that technology replaces parenting. Android just made children easier to watch [censored] (IPA: /pôrn/) on that thing, especially with Flash player or other 3rd party video players. Guess the parents wouldn’t want to watch the real-time monitoring app all day long if they have a proper life and career. It makes us wonder if there is an inappropriate app/website alert function other than grounding the kids as aftermath…

As for the MiiPC being better than Xbox 360 in parental control, it sure is a little bit more flexible. Better than Xbox 360 in protection against evil content? If anyone thinks Facebook is free of evil, then seriously, what’s evil? How about the Internet? Oh, and remember to disable Flash player and 3rd party video players in the monitoring app, they are gateways for evil too. In the end you have notepad and not much else.

[Author’s note: If parents found their kids have installed Flash player 11.3 on an Android 4.2 device like the MiiPC above, then they should probably prepare the kids to be software engineers or a search engine optimization (SEO) consultant. Either the kids are really bright about writing apps and software to solve software problems or they really know how to search using search engines such as Google.]

As a role model for kids, we can’t solely rely on computers to assist them to grasp the “correct values”, much less the concept of what is really “correct”, “true”, “right”, etc. With the Internet, parts of which are inherently evil/bad, all kinds of information, misinformation and disinformation is flowing freely. The point is to assist them in the early days of using the computer and the Internet to build their values base on external facts, not to shut them down at the first sign of trouble. Help them distinguish the misinformation/disinformation and rate the subjectivity of opinions online while training them to think independently, not to be easily influenced by what they saw on the Web. Instead of banning whatever the parents considered to be ‘bad’ for them and punishing them in the aftermath while standing-off against them, teach them . But neither this MiiPC nor Xbox 360 can do any of the above, much less address the issue of comparing and ‘winning’ through the nearly pointless parental controls.

Limiting the time for using each app/website, or the MiiPC in general is the only real preventive measure for Internet addiction. However instead of getting a plug-in timer which directly cuts off the power to the PC when time’s up, we now have a more subtle way, that’s a time limit imposed by the MiiPC app and executed on the PC side. It just says “You’ve used up all your time for your social networks for today, please check back tomorrow.” but little if anything is learned.

This is not how one teaches kids to use computer and the Internet in a healthy way either, it is just saying no. Think about it, why would severe addiction be the case when the kids have legit hobbies other than “Facebook” or video games? What would directly result in the need to introduce such time limit(s)? And ultimately who should be responsible for this need, or even the addiction in general? This kind of problem is avoided through parenting, not with a timer.

To conclude, we genuinely feel this is a pointless comparison, and this palliative solution for parental control worthly of their own facepalm awards. It doesn’t get to the root cause and like any other parental control mechanism, parents are very willing to depend solely on them to literally “teach” their kids on how to use the computer as well as the Internet. Unfortunately they all fail at the basic thing they should be doing, and worse yet gives parents another reason to avoid actual parenting. 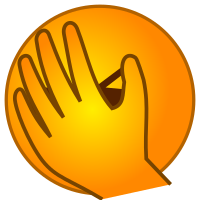