Can it live up to our expectations?

Back at GDC Intel spent a considerable amount of time talking up their latest driver release. The insightfully named .3071 driver was said to offer a ten percent performance boost over the prior release. Of course we went right to work inside of S|A’s orbital lab to verify Intel’s claims.

By far the biggest change that Intel introduced with this driver is a new graphics control panel that eschews the dark and transparency laden visual style of Intel’s previous iterations for a brighter, more Windows 8 friendly, interface. The functionality seems to be more or less equal between the two designs. So Intel hasn’t taken any steps backward in that regard, but compared to its counterparts from AMD and Nvidia; Intel’s driver control panel still hasn’t reached feature parity. 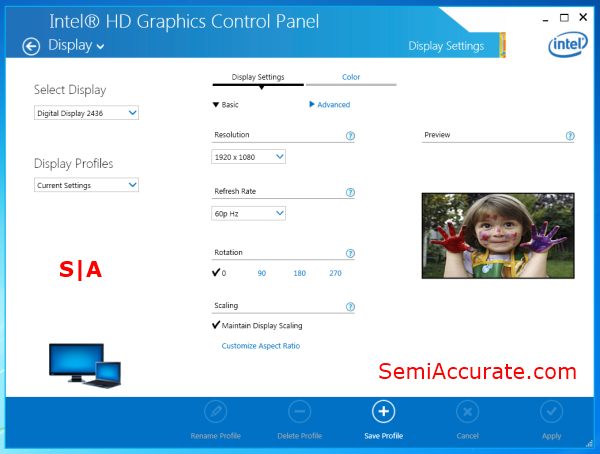 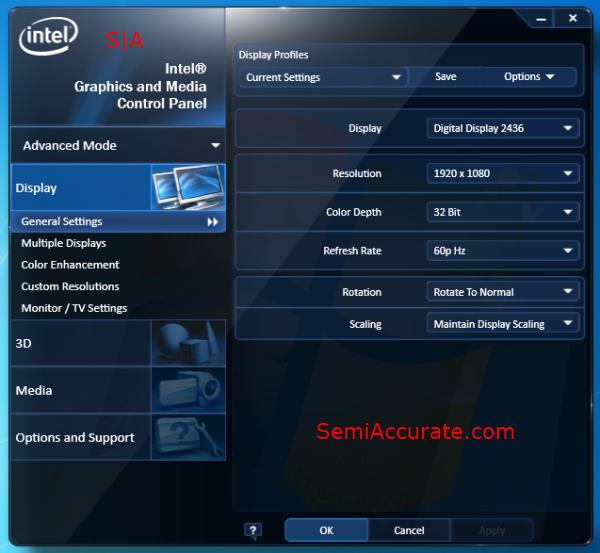 We’re still using the same Intel supplied Corei7-3770K based test bed that we had for our original review of the HD 4000 around this time last year. For our testing today we’ve opted to look at six titles; Crysis 3, Battlefield 3, Civilization V, DOTA 2, Counter-Strike: Global Offensive, and Max Payne 3. These are all relatively recent games, that each represent a different gameplay style. Crysis 3 is based around the capabilities of the nanosuit. Battlefield 3 is a classic corridor based first-person shooter. Civilization V is a turn based strategy game. DOTA 2 is a multiplayer-online-battle-arena-style game. CS:GO is an arcade-style first-person shooter. And Max Payne 3 is a bullet-time-based third person shooter. 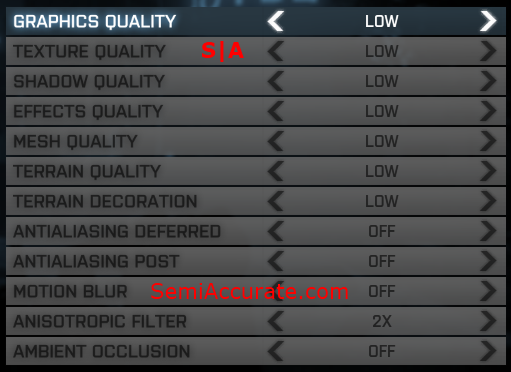 Using lowered quality settings is a common occurrence when you’re trying to get games to run on low-end graphics solutions like the HD 4000. Today testing is no exception to this notion. In Battlefield 3 we had to lower the game’s quality settings to their minimums, and then use a reduced resolution of merely 1366 by 768 rather than the 1920 by 1080 resolution that our test system’s monitor supports natively. Of course this was all in the name of teasing a playable experience out of our system. 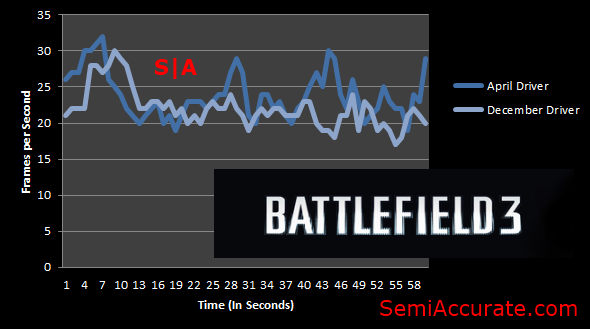 Our performance results show that Intel’s latest driver offers a small, but clear advantage over its predecessor. Although, subjectively the game seemed choppy on Intel’s HD 4000 graphics solution irrespective of what driver we were using.

We were actually able to use low to medium quality settings in Civilization V and get playable frame rates with both driver sets. But with Intel’s latest driver, we did notice some texture corruption. 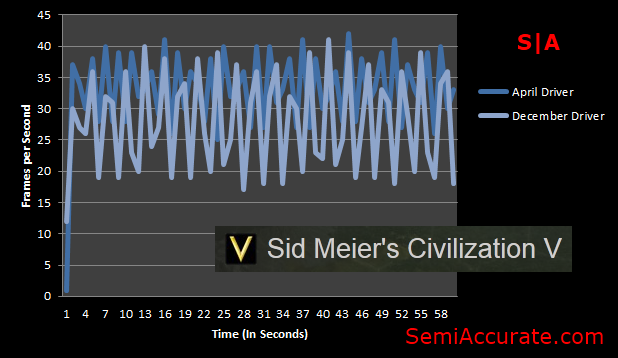 Again, Intel’s latest driver offers clearly superior performance to the previous iteration and it’s very likely that users could actually increase their quality settings in this game thanks to Intel’s new drivers. It seems like someone at Intel really likes Civ 5 for the special love it got. 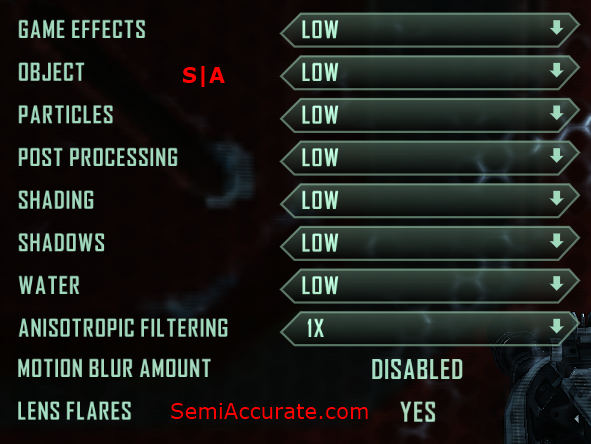 We did our best to try to get playable frame-rates out of Crysis 3 on the HD 4000, but our efforts were for naught. No matter how far you lower the game’s quality settings, and decrease its resolution it’s still not all that playable on Intel’s highest performance graphics solution. 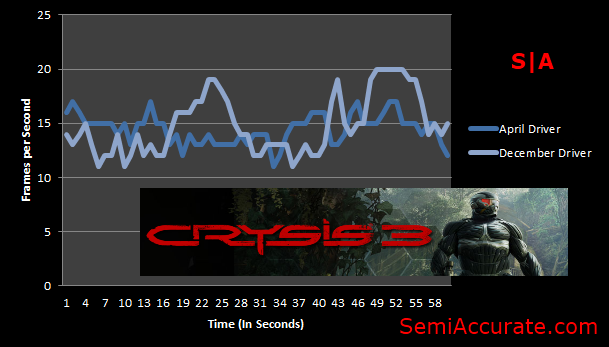 It looks like Intel’s older driver may actually have the performance edge in Crysis 3. But this is a largely irrelevant victory, as the game isn’t playable on either driver set.

Counter-Strike: Global Offensive is actually quite playable on the HD 4000. Granted we had to drop the game’s quality settings into the floor to get playable frame rates. But none the less, I was able to actually win a few competitive matches on our test system. 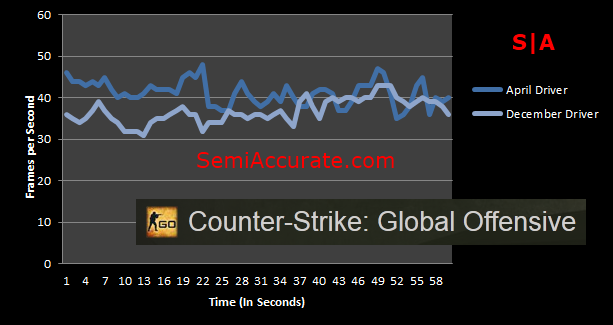 The April driver once again offers superior performance to the iteration from last December. So far it appears that Intel has focused mainly on improving performance in games that were already playable on the HD 4000.

There were two keys to getting playable frame rates out of the Dota 2 on the 4000. Disabling Vsync, which is enabled by default, and using the lowest texture quality possible. If the driver guys at Intel were feeling like a crafty bunch, then improving performance in Dota 2, and its wildly popular competitor, League of Legends, would be at the top of their to-do list. 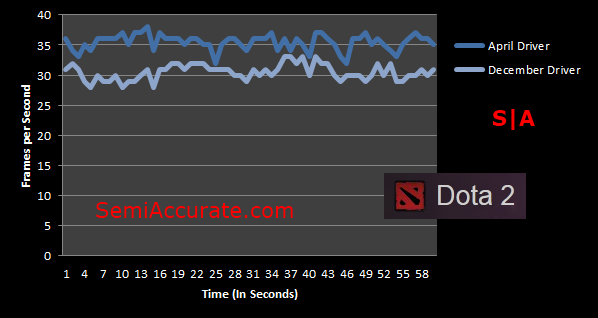 Again and again it’s clear that the April driver offers a performance increase. It’s a small bump, but it’s inline with the ten percent boost that Intel was promising. 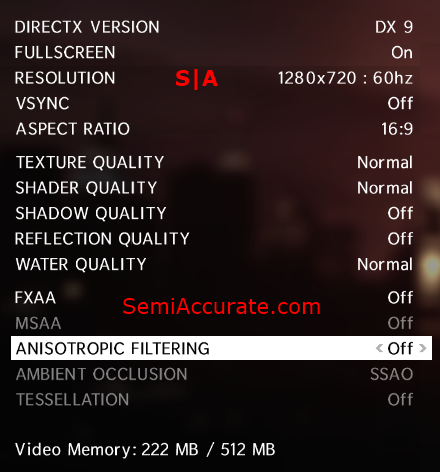 With Max Payne 3 we had a similar tuning experience to that of Crysis 3. The one major difference being that we were able to get playable frame rates out of Max Payne, which is not something that we can say about Crysis. 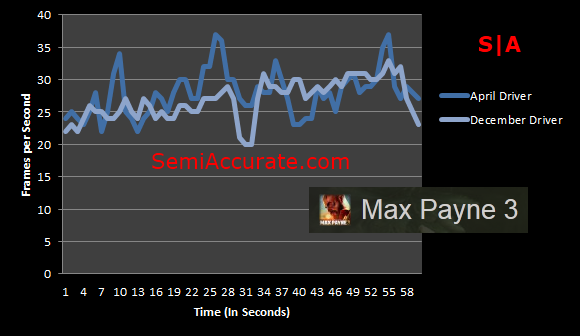 The April driver offers slightly better performance overall than the December driver. As I was writing this it occurred to me that comparing the average frames per second between drivers might actually be more usefully than our standard graphs for verifying Intel’s performance claims. 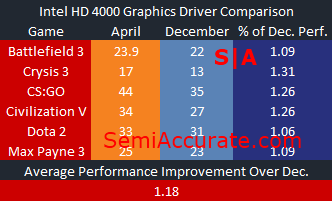 An almost 20 percent improvement is hard to dismiss. Surprisingly two of the biggest performance improvements are in games that already ran well with the previous driver. Now Intel’s new driver doesn’t make any previously unplayable games playable, but it  does provide a nice bump across the board.

So can the HD 4000 play Crysis? Well, no. No it can’t, it’s been a year and that story hasn’t changed. But it’s fair to say that Intel’s new driver has lived up to its promises. More than that though, in some games we saw an extra five to ten frames per second from this new driver. Intel’s new drivers bring with it a very respectable performance increase for Ivy Bridge owners.

I’m really happy to see Intel’s graphics drivers offering performance improvements like this one. Now if Intel can continue releasing drivers like this one, fix the graphics corruption issues in Civilization V, and introduce higher performance graphics solutions with Haswell; then those small steps begin to add up.  Whether or not they’ll become a respected PC graphics company remains to be seen.S|A