ARM makes a learning remote that will never need batteries

Techcon 13: No batteries for you, just solar and mechanical energy

ARM had an interesting demo at Techcon about how to build a learning remote that never needed to be charged. It may not look very exciting but proof of concepts rarely do, what is important is that it worked.

The idea started off as a question, basically “can we do it?” Once the ‘pub’ phase of the project was concluded with a, “yeth, hic”, the next question asked was “how?” That is the harder problem and it took some research in to power scavenging, some research in to low power components, some design, a lot of testing, and more good old-fashioned engineering. The result worked and looked like this. 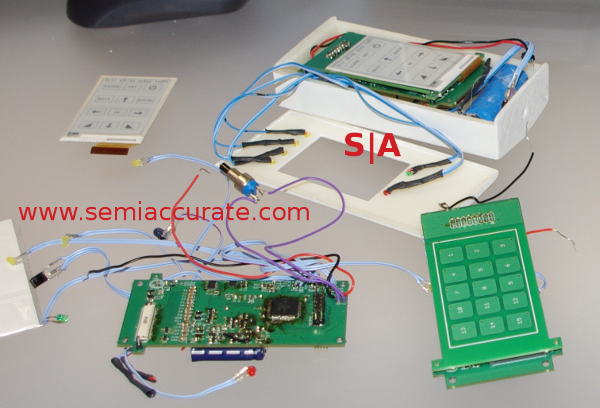 Beauty is often said to reside on the inside

Initially it was determined that a power budget of about 20 milliamps max draw was necessary for a really basic learning remote control. That isn’t much if you think about it, a cell phone usually takes many times that while doing nothing. Then again without external power or batteries, how do you get even that much from the environment?

ARM looked at three technologies, ambient heat, solar, and mechanical. Ambient heat via a Peltier cooler/generator was ruled out because there is no reliable cooling source available, hands are warm but the world around it could easily be warmer. That meant mechanical generation in the form of a magnet in a tube to generate power from movement and a small solar panel that is on the underside of the remote pictured above. You can’t see the panels in the picture but they are small, the mechanical generator is the bit wrapped in blue “scientifical” tape.

Now that you have a reliable 20 milliamps to splurge on actually doing stuff, what do you do it with? The crack team at ARM started with a Freescale M0+ SoC but even that could tax the generous power allocated to it if bad decisions were made. Careful engineering was still required to not put undue loads on the system.

First up was the screen. Most modern screens could not power the back light long enough to register as on to the human eye with the power this project could supply. Any screen that needs a refresh or back light is right out leaving only bi-stable/e-ink type screens. Guess what ARM chose? Behind that they put a touch sensing PCB and were very careful about how they read it.

One problem is that a chip to run the display would probably overtax the power budget so once again ARM had to innovate. The screen is run directly from the M0+ as a peripheral, no external logic is required so no extra power is needed. The screen in this mode pulls 20mA for 3-4 seconds to do an update, that is probably the highest power draw the remote will see.

If ARM did the logical engineering tradeoff of putting a lousy touch sensor in, much more energy than that could be scavenged by a pissed off user pounding on the buttons, throwing the unit at the wall would just be extra power at that point. If ARM was clever enough to downgrade the touch sensor, you have to wonder why they didn’t consider putting in sonic energy harvesting in?. A loud “)($#)_)%ing remote!!!!” is probably good for a sustained 30mA. Maybe we will see this in gen2.

The last but not nearly the least challenging problem is how to do all this reliably in a very variable power environment. You could have a (relatively) large influx of power during use or there could be almost none, and any internal storage may likewise vary from low to high. The solution there was to use one of the Freescale SoC’s ADCs to monitor voltage and use that to determine what to do and how to do it. Simple as this sounds it is a very complex problem.

As you can tell the team at ARM did solve it. There is a beautiful on the inside learning remote control with a full bi-stable display. It requires no power to use and never needs charging, batteries, or anything else other than a little light and user frustration. It may not change the world but it is a really interesting engineering exercise, in short they did it.S|A