Imagination outs a lot of details and demos at CES

CES 2015: Fleshing out anoucements with hardware and software

Imagination had a bunch of new demos and hardware to show at CES but nothing groundbreaking. That said there were a lot of details revealed that made what they have at the moment quite a bit more impressive than it first sounded.

The first bit of news was the so called Library demo that was used to show off the 7-series GPUs at their unveiling. What was interesting is not that the demo did anything technically new but the mere fact that it used all of the techniques it did in a mobile device. What did it do? How about 4K textures, two different hardware texture compression techniques, HDR, physically accurate lighting, and 4xMSAA, all in realtime. On a scene with 250K triangles. In a pocketable form factor. How long ago was this bleeding edge for a PC? 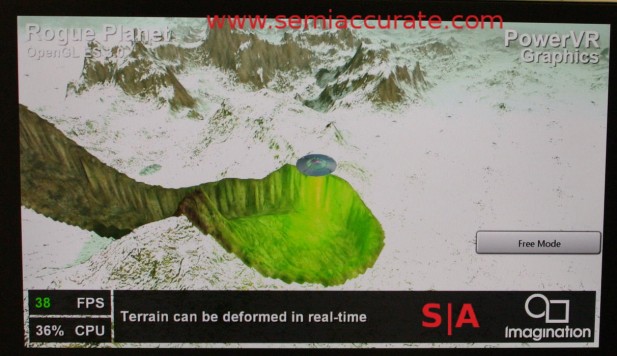 Next up was a new demo called Rogue Planet which showed off Imagination’s tessellation capabilities. Running in software rather than hardware in the above demo it deformed meshes and tessellated in real-time while running at a steady 30+FPS. More impressive was that it only used ~40% of the CPU power to do this, something that will drop to roughly zero when Imagination’s hardware tessellating parts hit the market.

From there we had an update on the Wizard family of cores that feature integrated ray-tracing hardware units. These were announced at GDC 2014 and the big update is that dev boards should be out in Q4. It is a long ways away still but Wizard should be quite impressive when it arrives. 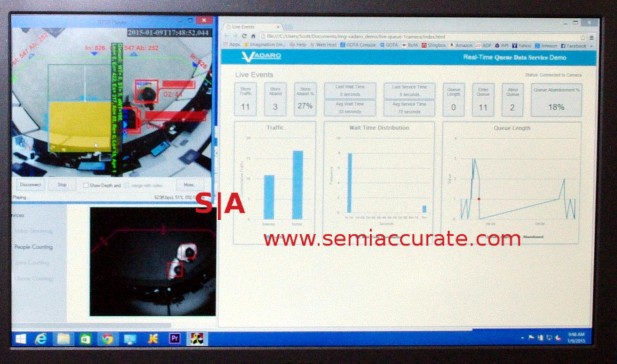 Next up was a demo from a company called Vadaro for video analytics using the Imagination Raptor ISP. What Vadaro does is to take a video of things like checkout lines at a supermarket and analyze how many people are in line, how long the line is, and how many people walk away. The interesting bit is that the analytics are all done on the camera itself where possible, thanks of course to the Imagination hardware.

This allows the bandwidth between the camera and the controlling box to be vastly reduced. Instead of beaming tens or hundreds of high rez streams to a controller to analyze at once, the Vadaro system will only send a few bytes like, “line 3 too long” or, “people leaving before serviced”. From there the host system can decide what to do and who to alert to fix the problems. It is a very smart system that potentially scales much better than traditional solutions. It can also feed video data back too but that is more of a nicety than a necessity. 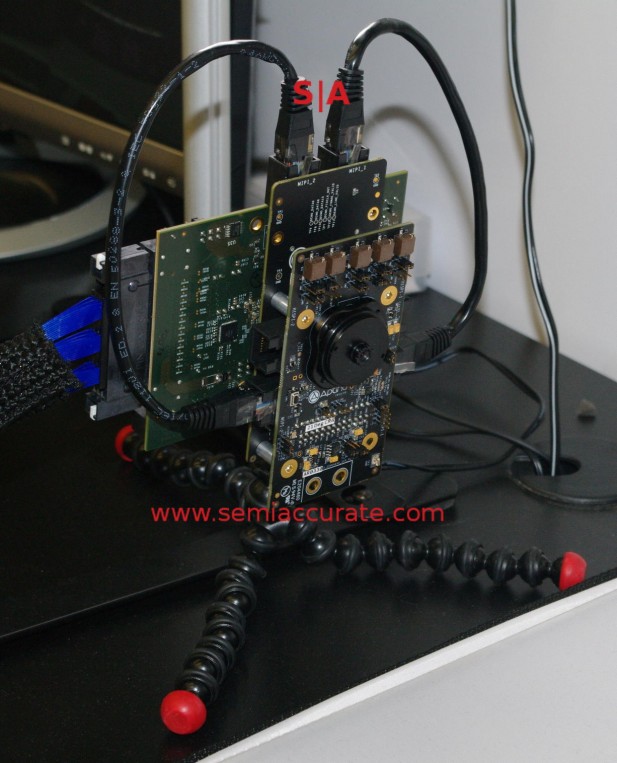 Raptor ISPs can scale from devices like Google Glass to full 4K screens and now support 16-bit color too. Imagination points to things like ADAS which will be almost mandatory in most cars soon enough as potential markets and we agree. One other nice touch is region of interest encoding capabilities in Raptor. In this case the GPU will detect the region, say a face in a video conference, and signal the ISP to encode only that part at a higher rez than the background for greater efficiency and power savings. Once again it is a smart solution.

Last up is a feature we didn’t realize that MIPS was capable of, running full hardware (Type 1) based virtualization on an M5150 CPU core. In this case the hypervisor is called Fexerox and is made by a company called Seltech. In the demo above it was running Itron and Linux but any RTOS + full OS should work, Seltech claims up to eight OSes can run simultaneously. The demo was rebooting the full OS without making the RTOS hiccup, exactly what it should be doing.

If you don’t see the point to all of this, the idea is to replace multi-chip or multi-core devices with a single chip that can hard separate software instances. This lowers BoM cost at a (hopefully vastly) minimized risk of problems. You don’t want your games to take down your health monitor, do you? If hardware virtualization takes off in mobile SoCs, and SemiAccurate thinks it will, it will make a lot of people’s lives easier and devices cheaper and more reliable.

And that in a nutshell was Imagination’s CES 2015 showing. Several demos, a few updates, and a few feature reveals. Most of the hardware is coming in the near future and the capabilities they bring could be very useful. Virtualization and tessellation are known quantities now in a new space, ray-tracing is more of a green field in mobile at the moment. I can’t way to see the killer apps for all three.S|A