Displaylink is continually pushing the possible with 4K video over USB and doesn’t stop there. How much more can they push over a single 5Gb USB connection? If what SemiAccurate saw at CES is productized, much more.

The first thing we saw at the Displaylink CES booth was a USB-C cable and a docking station to go with it. This port was also hacked into the laptop you see below by Displaylink and is only using USB 3.0/5Gbps signaling even if the connector is a -C capable of 10Gbps. The intent was to show off the docking station, connected only via USB, and what the company’s new chips were capable of doing. 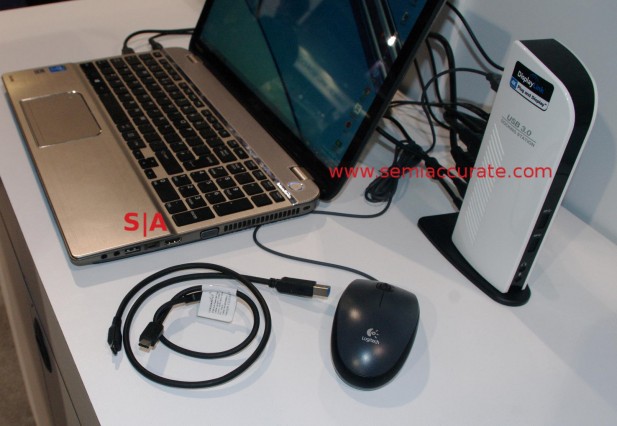 Note the port under the S|A logo

If you peeled your eyes away from the USB-C bits and looked up you would see the point of all this, two 4K screens sent over one 5Gbps USB link. I know the next question you are going to ask and yes that is 4K/60, playing video on one screen and web browsing on the other. Again that is over a single USB link, not one per screen. No we are not joking either, see? 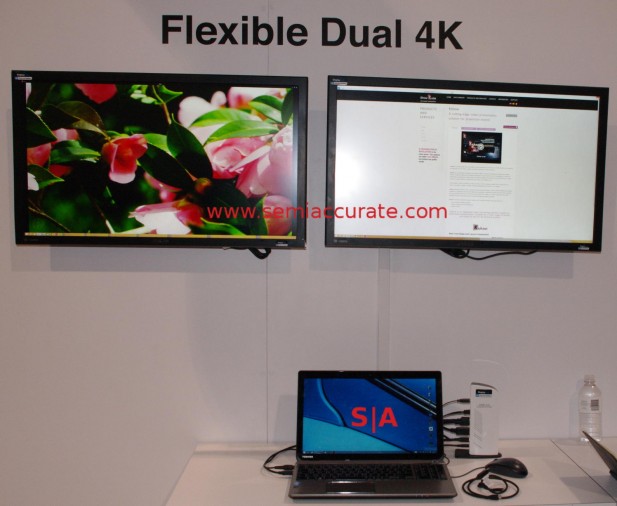 Note the two screens from one cable

This dual-4K over USB is not production silicon, not even close but if you have followed Displaylink for a while, you can probably guess that this will be productized some day. Until then you are stuck with a mere single 4K over USB, sucks to be you. Just kidding, you aren’t stuck to 4K over USB, they were showing off 5K over USB, from a tablet no less, see? 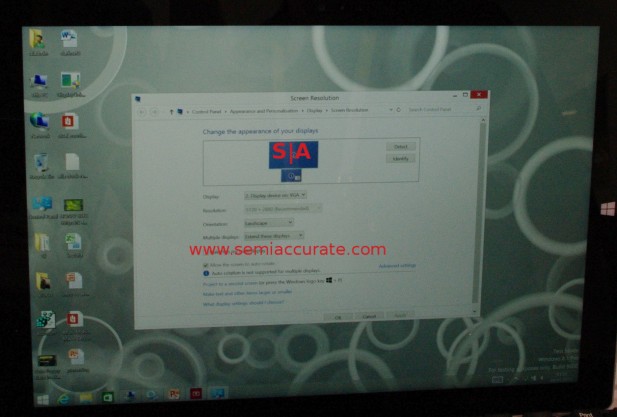 Unfortunately this is all relegated to Windows or Macs at the moment, insert obligatory jab at Displaylink of Linux support here. (Note: This is both true and a bit of an inside joke, they are sick of me asking and have been for a few years now.) That doesn’t diminish the inherent goodness of being able to push 5K over a USB port, but we still wish we could try it on a real OS (Note 2: Poke poke.). More on that in a bit though.

The next problem is that wired docks, even ones with only a single USB cable, are so passé now it isn’t funny. Wireless is the future, just ask anyone selling wireless products, wires are so last year they should be illegal or something. Unfortunately if you want really high bandwidth you kinda have to use wires. Or you can use Wi-Gig aka 802.11ad 50GHz line-of-sight wireless ala the Qualcomm/Wilocity radios. Imagine what you could do with that and Displaylinks docking chips, eh? No don’t imagine it, just take a look. 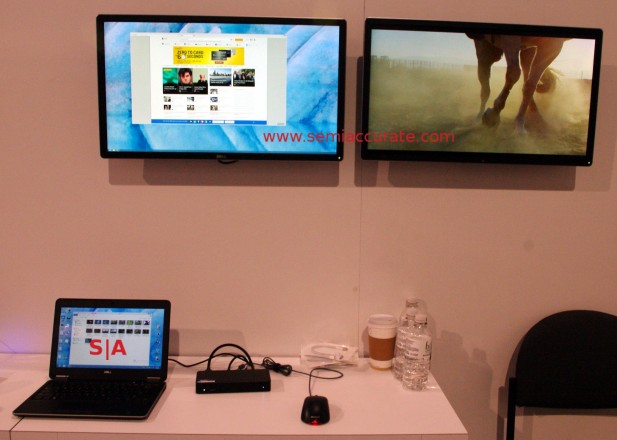 Not just one but two 4K over 50GHz

Yes you guessed it, a Wi-Gig dock with a wireless link to the docking station plus Displaylink equals two 4K screens. Yes it is USB over Wi-Gig and then back to cables, but it is a pretty good demo don’t you think? If you were worried about the bandwidth of 802.11ad, don’t be as long as you only need two 4K screens connected over it. Per link, per channel, you could probably do more with multiple radios. Good enough for you effete wireless types yet? Now back to the real OS stuff… 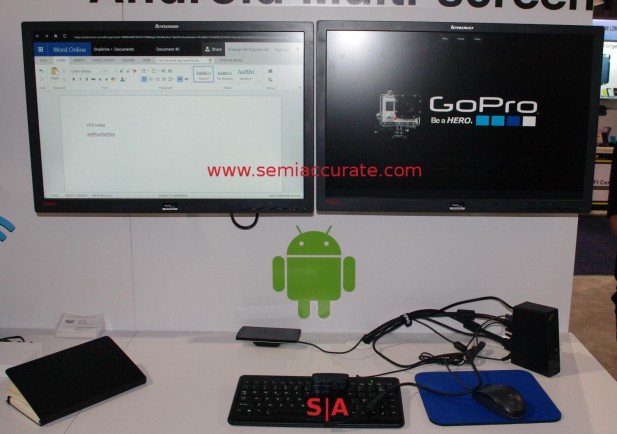 Not a real OS but getting much closer

Yup you guessed it, there was a prototype Displaylink software package running on Android but not at 4K, only two 1080p screens at the moment. It uses a very slick bit of software to set virtual screens and then assign them to physical devices on the fly. Those non-Windows people out there used to multiple workspace capable OSes will know what I mean, you just set up workspaces like normal, assign them to a physical monitor, and it just works. Your mouse/cursor will move seamlessly between them too.

At the moment you can have up to eight or so virtual screens and map them on up to three physical screens dynamically. This does include the device screen as one mind you, but two external devices takes Android from a toy OS to a road warrior capable workstation. Almost. For that you would most likely want ChromeOS, not Android. Luckily this works too, Displaylink has ChromeOS support ready, or at least as ready as the experimental Android support is at the moment.

Before we forget you might remember back to the effete wireless snob comments above. Those who insist OSes like Android are fully capable tend to be more wireless-centric than ordinary people that annoy you with mobile superiority comments. Luckily for them, this whole dual external monitor rig is also wireless from the beginning, it all ran over mere 802.11ac. Happy now? On to the tall bikes… 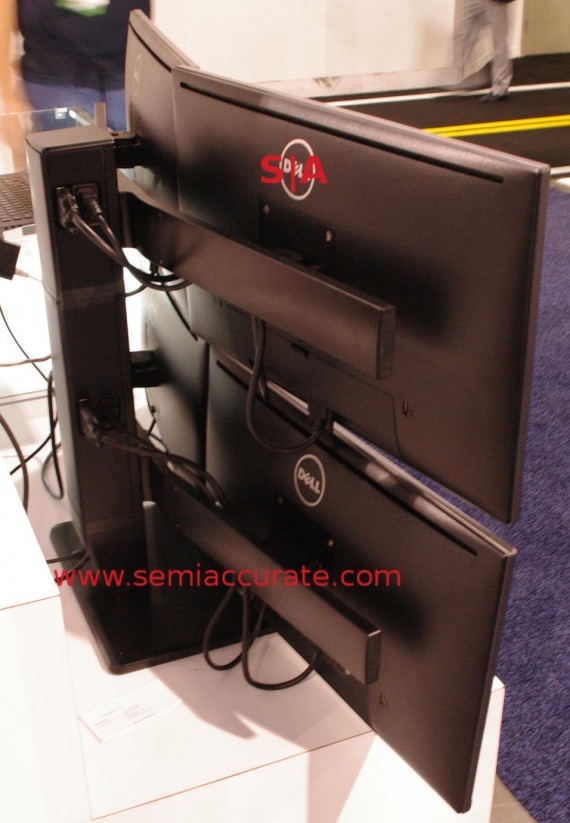 Four monitors in one

And now for something completely different, a four monitor stand with dual Displaylink chips built-in. If you have one of these at your desk you just sit down, plug-in power and two USB cables, et voilà, four monitors light up. Once the dual 4K support comes out for real it will be four 4K monitors but for the moment you are stuck with only four 1080p devices. Or you can do it wirelessly but in an office environment it would not work out so well. At least this one has all the cables tied up nicely by design, they spent lot of time on cable management. 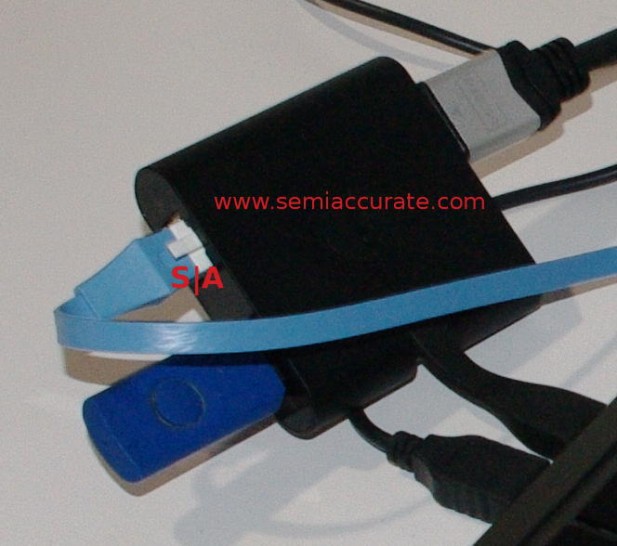 Docks are now mini but too well hidden

Last up we have the Dell 4-in-1, a $79 travel dock thingy that is quite small. It has a USB 3.0 input, plus USB, GigE, VGA, and HDMI outs, and it all folds up into a tiny little pocketable package. I would strongly recommend this device but there are two problems, first is the aforementioned lack of Linux support and second is the Dell web site. The site has gone so far past useless that it is enough for me to recommend buying another brand, I could not find this device after half an hour of trying to get a link for you. If you think that is bad, go try and configure a business PC, I dare you… What happened to Dell, they used to not suck.

Back to the good stuff, Displaylink. As you can see, 4K video over USB is real and a purchasable product in many forms. If you want multiple 4K screens, wireless 4K, dual wireless 1080p monitors on Android, or the rest, you will have to wait a bit. For the moment they are all just demos but if they have the silicon to demo it with now, it won’t be long before you can buy. Similarly Android is based on Linux as is Chrome so there is movement in the right direction. Stay tuned gentle readers, and go backhand someone proclaiming the death of wires for me while you wait.S|A