Just exactly what is Intel launching today with the new Xeon E7v3 line of CPUs? The easy answer is 12 CPUs spread across four segments and one shocking change, but we are not one to take the easy path so lets dive in.

The new Haswell-EX line of CPUs are all cut from the same cloth or die as is the case here. It is a 22nm, 662mm^2 monster containing about 5.7B transistors. Depending on which variant you choose, it will burn between 115-165W from its 4-18 cores. Similarly clocks run the gamut from 1.9-3.2GHz (base), and just about everything else moves up or down a bit based on SKU too. It looks like this. 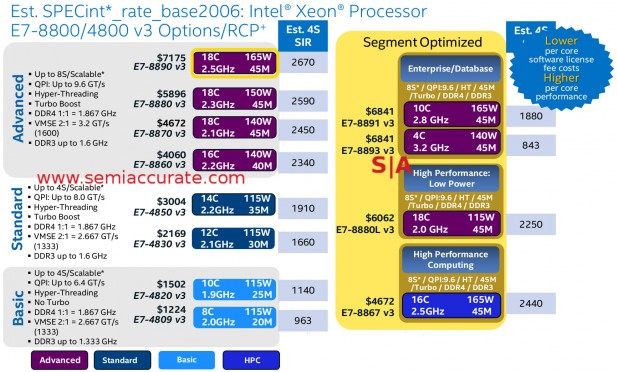 You can click for a larger version you know

The four major groupings are Basic, Standard, Advanced, and Segment Optimized, and in a radical shift in marketing policy, they actually mean something. Basic and Standard are 4S max with Turbo fused off on the basic line. Everything is capped at lower levels on the Basic line but otherwise things are roughly equal. Core counts for one segment end where the higher one starts off.

Advanced gets a bit interesting with the main addition being 8S capabilities. On top of that QPI and memory clocks go up a bit as well. Core counts start at 16 and go to 18 but both are above where Standard ended. Not coincidentally, Standard’s core counts start where basic ends. It is nice, neat, and unswervingly logical progression.

That all gets thrown out the window for the Segment Optimized (SO) versions, they are all over the map. On the high-end you have low core counts and very high clocks. Why? Because most enterprise software is licensed by the core and those license costs are far more painful than the rather large CPU price tags, at times by an order of magnitude or more. The idea here is to put the maximum memory, connectivity, and clocks on the lowest core count available. For enterprise software customers, it is the only sane way to do things.

The middle entry in SO is another interesting one, it plays off the clock vs power curve in the same way many GPUs do. Take the most efficient point on the performance vs power curve and then run as many cores as possible there. For the Haswell-EX line that appears to be a base clock of 2GHz with all 18 cores lit up. It’s all about performance per Watt, and now you know the new sweet spot.

Last up is the HPC special, basically a low-end Advanced part binned for speed. It isn’t anything special other than having all the bells and whistles but only 16 cores along with the full 45MB cache. Then again it seems a lot saner to save $2503 and end up with two less cores than the top of the line advanced but I don’t make these pricing decisions.

The most astounding bit about the new Xeon E7v3 line is not technical at all, and you really should sit down before you read this. Intel marketing is moving in the right direction on naming things. There, we said it. 8S parts are all labelled E7-88xx v3 and 4S parts are named E7-48xx v3. *GASP* Sanity *COUGH*.

Scarier yet the xx at the end of the SKU names moves up fairly regularly as you go from Basic -> Standard -> Advanced too but the SO lines screw that up a bit. That said they are all 8S and all conform there but the Low Power variant has an L postfix for no reason. Other than that they all numerically fit close to their respective places more of less as you would expect by Spec Int Rate (SIR on the table). What is the world coming to?

And that is about what you get with the new Haswell-EX line, 12 CPUs, four groups, and things laid out more or less logically. On the technical side things are a clean progression from the Ivy Bridge based E7v2 that came before it but this marketing curve ball is a true shock. Who ever expected Intel to come up with a sane naming scheme? That day has just arrived, now quick close your windows before the locust swarm arrives.S|A