AMD puts out a few goodies amid vague terms

AMD is talking quite a bit about its future prospects, but aside from a few details it is only in vague terms. Even with broad brushes, SemiAccurate found quite a bit to like in today’s Financial Analyst Day presentations.

The first bit of news was AMD’s Zen cores, something you may have noticed that only SemiAccurate did not publish last week. That was because the slides ‘leaked’ were faked and we were the only site that appears to have done the merest bit of fact-checking around them. The real news is how many sites will admit they did wrong and did not do the most basic fact checking. Don’t hold your breath waiting though.

Back to the Zen core disclosures, there really isn’t much to talk about that wasn’t known. It is all new and different from its predecessors in the Bulldozer family, that is a really good thing. AMD finally gets SMT and that should boost IPC quite a bit, 40% higher according to the company. The cache system is also said to be more modern but given where they came from, that isn’t exactly a high bar. When it arrives next year, Zen will be on a FinFET process but that is pretty much a given for chips that debut in that time frame. All told, nothing much but a few rumors confirmed.

This is followed on by the long-awaited K12 ARM cores, one quote on the slides say that the new core is, “Highly-leveraged with x86 Core Development”. SemiAccurate takes this to mean that K12 will be something akin to Zen with a different decode structure to handle ARM’s ISA instead of x86. If this assumption is accurate, it would mean a very high performance ARM core, on par with current x86 offerings. That would change the game fairly radically if the two ISAs were on par with each other, mix and match indeed. The only problem we see is that K12 appears to have slipped a year to 2017, the more things change…

You might recall that AMD killed off their SeaMicro systems products a few weeks ago. This was explained by Lisa Su as being a market that wasn’t growing and because AMD wasn’t a systems company, both of which we agree with. The thing lost on most pundits was the product itself was knifed, the underlying tech wasn’t. That will be rolled into the forthcoming server SoC as their fabric, and it will live on, just not as a pre-rolled package.

On a similar note, AMD’s Skybridge socket compatibility between x86 and ARM SoCs was killed because there was no real demand. Given the market for such chips are bespoke servers, no data center customer is going to mix and match so why force a single socket? Instead of lowest common denominator, AMD can now put out the right sockets for the right reasons. It may sound bad but it is a good move. 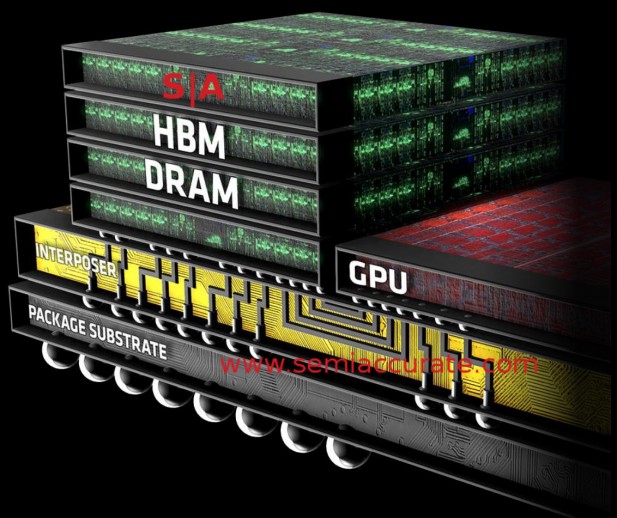 Fours years of waiting for this official diagram

On the GPU side, AMD finally confirms what SemiAccurate has been saying for years, Fiji will have HBM stacks for memory. We exclusively told you about this memory configuration last August, not quite a year ago. Please note that we also exclusively published a picture of a prototype AMD GPU with an interposer and HBM almost four years ago now. AMD is claiming that HBM will use half the power of GDDR5, and could have more than 3x the performance. We think this is either/or, not and. That said, given the massive bandwidth of HBM, we are fairly sure AMD will skew things towards power savings, there is too much bandwidth to use.

The next interesting data point comes far later on in the talks where AMD lists their data center offerings. There are three columns, x86/Zen, ARM/K12, and APU. The interesting part is that “Transformational Memory Architecture” is listed under the APU column. Any guesses what that means? Yes, APUs will get interposers and HBM too, just like SemiAccurate has been saying. It may come a year later than we thought, but it will be a fundamental change. That statement applies not only to the memory side of things, but the economics of the entire system, it is a game changer.

On the new product front, AMD is announcing a two new GPU series called M300 for mobile and 300 for desktop. Better yet there is a new 7000-series APU line out as well. We will have more details on both soon in a follow-up article.

For consumer side there are some updates too, and in keeping with today’s theme, are also suitably vague. There will finally be an update to the FX line, that is just CPU cores without GPUs, and they will sport Zen cores. The big news is that there will be an AM4 socket with DDR4 support. On the APU side the 7th Gen parts will also use AM4 and also FP4 on the mobile front. GPUs will get 2nd gen HBM stacks for >4GB memory sizes, and have VR acceleration whatever that means.

In the end there was nothing astoundingly new today, just a reiteration of where things are going. Some of this includes things SemiAccurate and other have been saying for literally years, upcoming technologies, directions, and combinations of existing technologies. On the server side, other than the K12 slip, things are about what we expected them to be; x86 and ARM are likely to be entirely substitutable and roughly on par with each other for performance. On top of that, AMD expects custom SoCs are to be the way forward, and that is where things get interesting.S|A