Microdia hits half a Terabyte with microSD4.0 cards

One of the surprises of Computex for SemiAccurate was Microdia and their massive 512GB SD4.0 cards. Luckily for our readers that was far from the only interesting thing they had to show.

Before we get into the products, lets bring you a bit of good news. Remember the stupidity that was SD card’s new interface called UHS-II? Yes that intensely stupid result of groupthink and… well nothing really, it was just idiotic full stop. Someone must have read our article because, wait for it, they fixed the problem in only a single year! For a tech standards body, that is better than lightning quick. What did they do? UHS-II, the bus, not the card speed grade, is now called SD4.0. Simple, easy, and a year too late but still welcome. That said SD4.0 is denoted by the same “II” mark it was, but progress is progress.

Now back to Microdia and their products, guess what they have? If you said an SD4.0 card, you are right. Better yet they have the first SD4.0 card SemiAccurate saw, and as far as we know the only one at Computex. Faster speeds are always nice but higher capacity has a place too, and luckily Microdia delivers on that front with a 512GB SD4.0 card.. 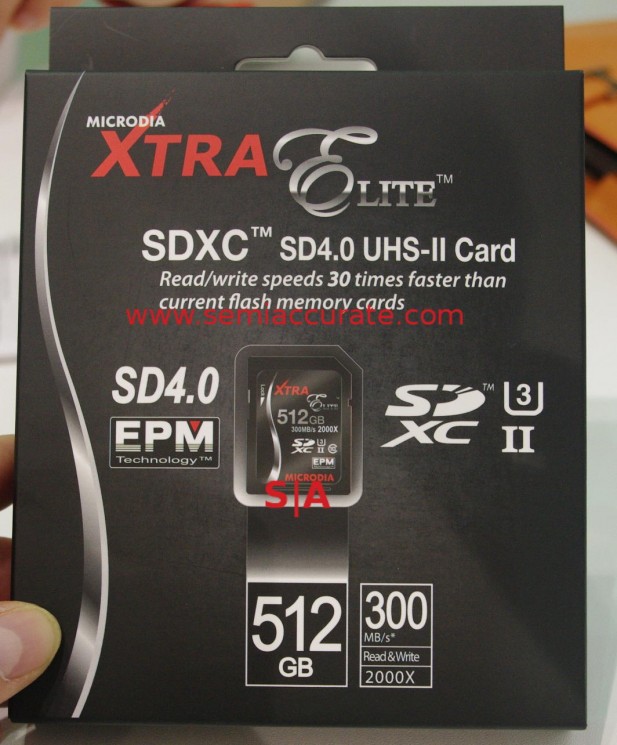 This monster will be available in July, production was just ramping when I talked to the company and it usually takes a few weeks, plus shipping, then stocking, and the rest of the normal meatspace delays. You should be able to find the 512GB SD4.0 cards on the market in a few weeks with a list price of a bit over $1000. As you might expect this price is highly dependent on the ever-fluctuating price of flash so Microdia not having an exact number 4-6 weeks out is quite understandable.

A 512GB SD card is fine and dandy, and one with a UHS-II bus is even better as long as you have a UHS-II card reader with a fast path to your PC. Once again Microdia to the rescue with a UHS-II/SD4.0 reader that has a USB3 port on the other end. This too was ramping at Computex and production units should be out in July too, about the same time as the 512GB cards. These readers will run in the low tens of dollars when they arrive, well worth picking one up even if you don’t have a UHS-II device yet. A fast SD reader is a good thing regardless of what you put into it, you never want it to be the bottleneck.

Could things get better? Sure they could, how about a 512GB micro-SD4.0 card? Microdia has them too and this one gets interesting, starting out with die stacking. Even if you thin the heck out of a chip it still takes up a lot of space. Add in a controller and you are pushing the limits of the physical size of the SD card. If you want to make it practical you also need some physical structure to keep it from bending, and a protective covering on both sides. Fragile, bendy, >$1000 micro-SD4.0 cards would have a pretty high RMA rate don’t you think?

Microdia claims to have solved those problems in two ways. One they call multistacking which probably is just what it sounds like, multiple stacks of flash side by side. The other innovation is that they use their own controller, something we know little about. Yet. I plan to change that as soon as is practical, but just realize they did it all themselves. With that level of vertical integration it is no wonder they are the first out of the gate.

For some reason I didn’t get any pictures of the prototypes but they did have them on display at Computex, apologies for that. As a bit of an apology I put in some of Microdia’s smaller SD4.0 cards, 32, 64, and 128GB, plus their UHS-II bus card reader. If you want speed and don’t need to take hours of 4K video without changing your SD card, these are a much more affordable solution. The sooner this gets widespread the better, I know I want several. Actually I want several of the 512GB versions in both normal and micro sizes, but that is just me. 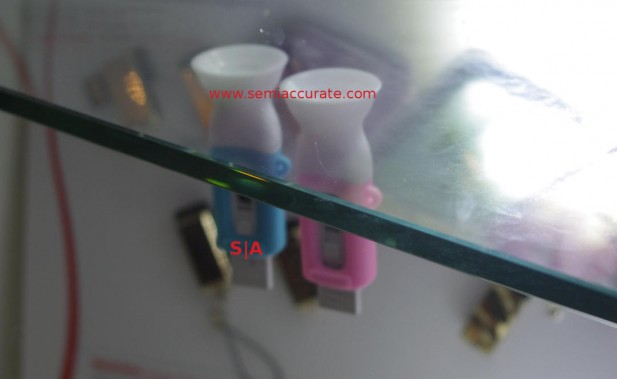 This USB-C OTG reader doesn’t suck, or does it?

Another interesting product is what Microdia calls their Standing OTG drive, basically a USB flash stick with OTG capabilities for phones and the like. As is the norm with these drives, one side is standard USB, the other side is a micro connector for devices so both ends are functional. This makes it hard to design an elegant form factor around, you usually end up with all sorts of caps that get in the way or get lost. Microdia put a rubber stand as a cap on theirs that doubles as a suction cup. It isn’t the sort of tech that rivals die stacking but it is cute. Better yet it is a USB-C device, the first we have seen with OTG capabilities. 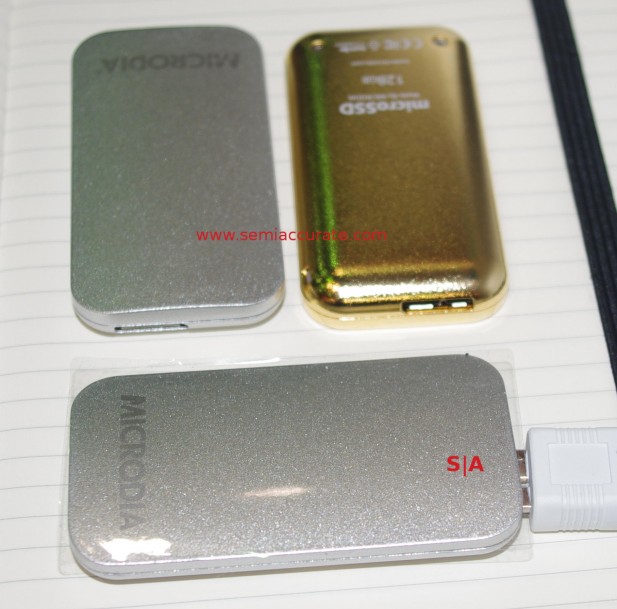 Last up we have something called the MicroSSD and it sits between a full SSD and a USB flash stick. It is a solid metal case, gold or silver finished, with a microUSB3 port on it. Inside there is between 32GB and 2TB of flash, the 2TB model is not out yet but should be fairly soon. The MicroSSD uses a combination of SMI and Microdia controllers so it is very likely a full SSD with a USB interface on the end. As you can gather from the size relative to the microUSB connector, it is a very small device but nothing comes to mind as a relative measure. It feels heavy, solid, and well-built but that is what you expect from a hunk of metal. If microUSB3 isn’t your connector of choice, USB-C is an option on for this drive.

In the end Microdia was nothing like what we were expecting when we walked up to the booth. The first thing SemiAccurate saw was a suction cup USB stick, hardly a game changer. When we looked closely we saw that it was the first USB-C OTG drive at the show, things got interesting. Under the hood there is some impressive stacking and controller capabilities at the company, keep an eye on them.S|A