CES 2018: Zen and Vega have a busy few years ahead

AMD’s CES Tech Day was more of a roadmap day with lots of upcoming goodies laid out. Some of these are things SemiAccurate has previously revealed, others are new to us so read on for all the goodies.

AMD made a very good choice to show off their really vague roadmaps, they are a point in their resurgence where it will comfort large buyers. With that the roadmaps were not much more than a year, a name, and a process, but it shows their confidence in the upcoming core releases. Lets start with the Zen core raodmap.

See, not exactly overwhelming with specifics but there are a few interesting nuggets. First is that Zen is being shrunk to Globalfoundries 12nm process said to be worth an ~10% performance improvement. Think of this as a very automated half-node shrink which ties in very nicely with AMD’s non-custom circuitry push over the last few years. While it isn’t free the upsides are pretty huge compared to the minor costs involved. Sampling now means a spring 2018 release for an enterprise soothing yearly cadence.

Same with Zen 2 aka Starship. The news is pretty big here, the design is complete likely meaning it has taped out but it could mean that the architecture is complete and it is being validated. Either way the yearly cadence of releases means 15 months or so, something that looks very viable at this point. The news SemiAccurate has heard about 7nm tapeouts and early silicon do no support views of those spouting doom and gloom for the foundries at this node.

Add another year to spring 2020 and we see Zen 3 on Globalfoundries 7nm+ process. If you haven’t been paying attention the code names after Starship are Rome and Milan, and yes we realize these are rehashes. The takehome message is that AMD has their act together and should deliver a steady cadence of updates for the foreseeable future. They claim the industry has been advancing at a 7-8% performance increase for years and they want to be way ahead of that curve. Looks doable.

AMD’s Vega roadmap is similarly exciting to look at with a 7nm Vega shrink this year, we hear Q4 best case, and a 7nm Navi in 2019. This is followed by the cleverly named NEXT-GEN on 7nm+ in 2020 which should bring, wait for it, NEXT–GEN features. OK that was lame, we admit it, but there isn’t anything more interesting to talk about on the Vega roadmap front.

In the product release arena things get a bit more interesting with Q1 releases for more AM4 based Ryzen desktops and mobile APUs. Q2 sees the second gen Zen cores meaning 12nm shrinks along with Ryzen Pro 1st gen 14nm mobile APUs. This is followed later in the year by 12nm Threadrippers and 12nm Ryzen Pros. Think yearly cadences from the 1st gen launch and you won’t be disappointed.

For the enthusiast there are two new Ryzen 3’s out, the 2300U and 2200U. OK they won’t set the world on fire with their specs but the prices just might do so. The 2300U comes in at $169 and the 2200U costs a mere $99, a pretty spectacular deal for a desktop part that should smoke the competition from Intel at much higher prices. Better yet AMD just slashed the prices on a whole host of processors, something that you should see in etailer pricing in the coming days. 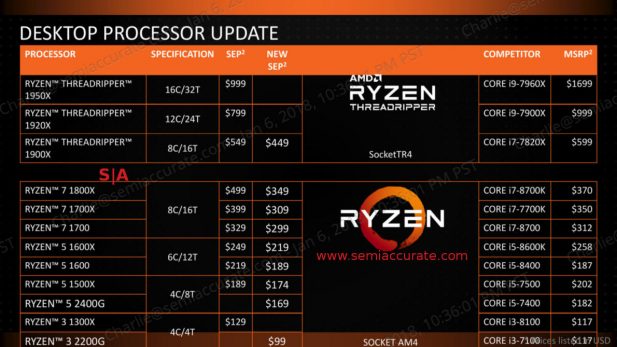 One really nice change is the 8-core Threadripper which drops from $549 to $449 and the Ryzen 1800X which drops $150 to $349. This is going to put some serious hurt on Intel’s highest margin consumer parts and increase the chunks of marketshare AMD is grabbing. Intel will probably respond but how far can they go before the analyst calls start getting ugly? The best news? The Wraith cooler goes from $59 to $45 to make way for the Wraith Prism with an LED ring. The lights have a hard off switch and overclocking features. OK it won’t set the world on fire either, but it is still welcome. 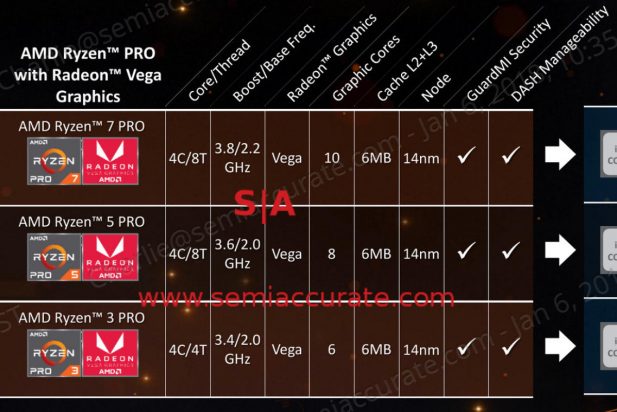 One of the more important parts AMD talked about was the mobile Ryzen Pro parts in 7/5/3 guises. These are simply the Ryzen ‘amateur’ parts with the manageability features not turned off, but they are still very important. Why? AMD has nothing in this very lucrative corporate space, enterprise needs manageable laptops and Intel has clear sailing. This spring that changes with the mobile Ryzen Pro parts, they might not excite enthusiasts but they will up the bottom line.

So that’s the nutshell version of what AMD announced at CES tech day 2018. It started out with reassuring roadmaps for the financial and corporate communities and then went into detail about a few upcoming parts. As you stepped farther out in time, things got vaguer but there was enough to keep us interested for the next few years anyway.S|A