Marketing games amid a new class of device

Intel has a problem and AMD solved it on the new Kaby-G “8th Gen Intel Core Processors With Radeon RX Vega M Graphics”. The chips are a new class of product on the market but the marketing is hilariously funny.

SemiAccurate told you about Kaby-G when they were unveiled in early November and now Intel is putting out a little more information, none of which should be a surprise. The short version is you take an AMD Vega Mobile part, tweak the package a bit, and slap it beside an Intel CPU and you have Kaby-G.

Lets start out with the marketing, note the name says Radeon RX Vega M Graphics, not AMD graphics. For some reason Intel seems averse to mention AMD and SemiAccurate can’t figure out why. In the entire presentation there is no mention of AMD, only Radeon, even the chips shots have the markings Photoshopped off. Intel goes to great lengths to stay on message, and the contortions are painful to watch. During AMD’s recent tech day, they named Intel multiple times rather than saying AMD Radeon Vega with Core CPU from unknown vendor, but we again can’t explain this disparity. 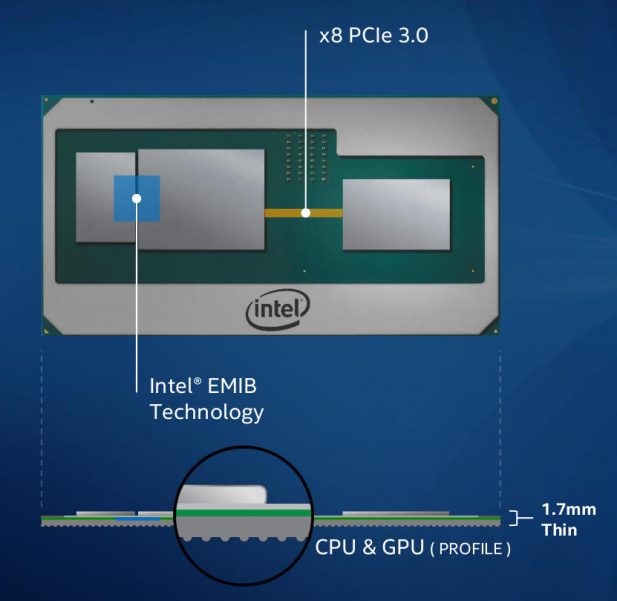 Note the sizes of the dies

As you can see from the above slide, Intel is breathlessly claiming that Kaby-G is a groundbreaking new technology and hoping all the technically illiterate echo back EMIB without understanding it. EMIB is an interposer that is selectively embedded into a package PCB to save a small bit of cost, in theory. What you save on interposer area you add back in package assembly cost and yield losses. Intel won’t talk about such things so you know it isn’t doing nearly as well as they hoped. Interposers are pretty cheap, a handful of metal layers and vias on a 65nm process are about as inexpensive as you can get so at best the cost differential is minor.

Back to the story at hand, EMIB is so revolutionary that Intel is not using it on their CPU, they are just connecting the AMD GPU to the HBM2 memory on what looks like a fairly vanilla 24CU Vega-M part. The connection between the Kaby Lake CPU and the GPU is, wait for it, plain old PCIe3 8x. The ‘magic’ is that it is run over the package PCB not an external slot.

Also note that the Z-height, a critical factor in modern notebooks, is the exact same 1.7mm as a Vega-M discrete GPU. Why is this important? It looks like EMIB saves ~0mm in Z-height versus a much simpler to manufacture interposer. Interesting, no?

The specs in question

There are five Kaby-G CPUs, now all classed as “8th Generation Core” which means a 3rd rewarming of the Skylake architecture. The specs are pretty straightforward, take a Kaby Lake ~7700 class device, make the package bigger, and put a discrete AMD GPU on it. Voila, magic, or so the claim goes.

What is really unique about Kaby-G is that it brings a desktop class discrete GPU into their package. Why do we say desktop? 65W and 100W TDPs from a base of a 45W or 65W CPU. Intel didn’t break out CPU power and GPU power, but the specs line up with the two linked CPUs pretty closely, there isn’t going to be a big delta between a Kaby and a Kaby-G there. Intel claims that it has the, “Up front design benefit of a 17.5W” CPU on a 45W part.

So now you can buy an Intel CPU with real graphics that work. Better yet you get all the AMD Radeon goodies with it, Chill, WattMan, FreeSync, and ReLive, not the technically functional Intel drivers. If that doesn’t put to rest the issue that Kaby-G is a repackaging exercise rather than a real integration play, nothing will.

That brings us to two more questions, price and applicability, both pretty intertwined. Price is pretty humorous in that Intel refused to give it out. The numbers floating around the press sewing circle is that the NUC pictured above is going to cost $799 for the 65W parts and $999 for the 100W versions. Do note that this is just for the PCB, case, and CPU, not RAM, storage, and OS. You can buy or build one hell of a high-end gaming PC for the $1500 a NUC system with Kaby-G will cost. It looks like nothing changed at Intel on the pricing front.

Kaby-G seems to add between $200 and $400 to the price of a bare NUC system which lines up nicely in the “don’t buy this you idiot” class of PCs. More importantly it also corroborates what OEMs were telling SemiAccurate a year ago when Intel was pitching Kaby-G to them, the price was laughable. It is the same situation as Haswell with Crystalwell, it is cheaper to buy a faster discrete part, memory for it, added battery (in mobile configurations), and OEMs still ended up ~$10 better off.

Haswell with Crystalwell was laughed out the door at most OEMs so Intel was rumored to have paid Lenovo significant money to put SOMETHING out with it. Now you will see Kaby-G have the same warm reception, it is priced laughably and will be on the market as a halo, not a volume part. Think MDF incentives aplenty.

And this is a shame because it could be really good, it has all the pieces to do the right thing for the right reason. It is a new class of product that really blends a solid CPU with a real discrete class GPU. Sure the packaging choices puts all the wattage in a tight area and aims it at small form factors so you will get throttling to silly levels unless an OEM really put the engineering effort into it, unlikely for a low volume halo, but in theory it should rock. Then there is that price, ouch.S|A