Intel’s Comet lake is ‘meh’, the launch was not

Last week Intel launched their ’10th Gen’ CPUs, a self-inflicted wound that shouldn’t have been released. If you think SemiAccurate is being a bit harsh here, ask yourself why Intel birthed this debacle in the first place.

Lets start with the innocuous stuff, the SKU list. There are eight ‘new’ CPUs in the Comet Lake line that when added to the 11 woeful parts in the Ice Lake family add up to the 10th generation of consumer CPUs. Actually these are only a subset of the mobile parts, -U and -Y SKUs to be specific, the other 497 variants will trickle out over the coming few years. Here is what is ‘new’. 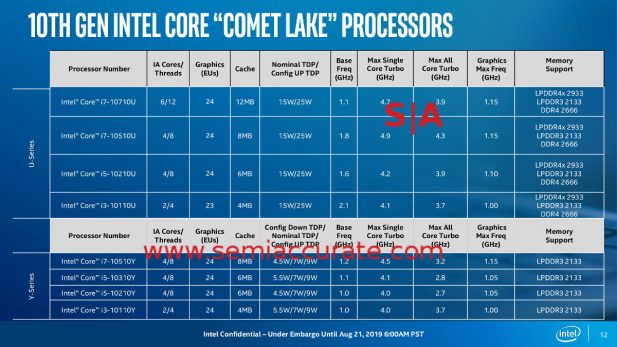 Newer but not really better

Why do we mockingly put ‘new’ in single quotes? Isn’t a 6-core laptop part actually new? Sure it is. So why the scorn? Lets start with the mild stuff, the -Y series of parts isn’t actually new, you can tell from the memory support. It is a non-update of the last series of parts, presumably Whiskey or Amber Lake but what do those names mean at this point when you can arbitrarily rename a Whiskey to Comet and call those two and the 10nm Ice Lake devices all ’10th Gen’? Intel has become a joke. 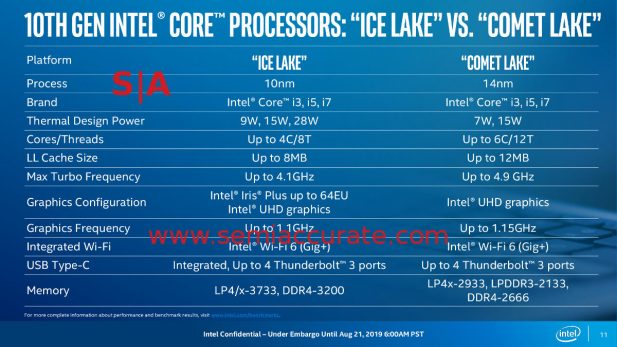 Then we come to the performance, or lack thereof, for this new generation. The new Ice Lake parts at 28W are 800MHz slower than their 14nm predecessors. If you couple that with the claimed ~18% IPC increase for Ice Lake cores you have rough parity between the two dies. After five years. And Ice takes 13W more to get there, the 15W:15W comparison isn’t exactly favorable to the newer cores but the 64 EUs in the new GPUs should annihilate the old ones.

But performance is why we are mocking Intel over this ‘family’. The company split out the Ice and Comet briefings so as to minimize comparisons and uncomfortable questions between the two. As we pointed out in our earlier article on Ice there were vague comparisons between the two ranges but no actual data. Intel even unethically hid the SKUs they were testing.

This time was more of the same, absolutely zero charts comparing this ‘generation’ to the last, or even to itself. All we got was a slide saying, “up to 16% better overall performance vs. previous gen”. That may sound great but, err, 6 cores vs 4 should get one a 50% higher performance or at least something closer to 50% than 0%, right? Don’t forget the faster memory on the new Comet devices which should get you a big chunk of that 16% alone. That level of sleaze is expected but we didn’t expect Intel to be outright unethical. Again. Actually we kinda did but we honestly hoped they wouldn’t do it again.

This is wrong and it needs to stop

Yup that 16% max increase when going from a 6C i7-10710U to a 4C i7-8565U was bad. The fact that they compared a 25W 10710U to a 15W 8565U and buried that fact in the fine print is unacceptable. We once again call for the idiots responsible to be fired, not that Intel will do anything, it seems this sort of behavior has become acceptable at big blue. It still isn’t right.

Then again what are you going to do when your ‘new’ line of parts is 1/3 renames, 1/3 unmanufacturable, slower, and hotter chips, and 1/3 mild refreshes? Whatever it is, what Intel did is something they simply should not have done, ever. Instead of an article talking about the first 6C laptop part, they are getting an article saying how they are unethical and trying to get reviewers to say things they are not legally allowed to actually say themselves.

Then we come to power. Ice Lake is built on 10nm so it is more power efficient, right? Prior to this release if you had asked us, we would have said yes it was. Sure the 10nm Cannon Lake was significantly slower than a contemporary 14nm Intel CPU, burned more power without a GPU than a 14nm part with GPU, and didn’t yield enough to make the design team all keychains, but this time it was different, right?

Look at the Ice Lake SKUs, the -U SKUs are 15/25W and one 28W with the -Ys coming in at 9/12W. Nothing unusual here so far other than the 28W halo part to grope for parity with the 15W Whiskey/Comet parts. Comet -Us are also 15/25W, so far so good. Comet-Y however comes in at 4.5/7/9W however, a significant energy savings vs the newer and presumably more efficient 10nm Ice Lake parts.

Which brings us to the next unethical thing, Intel gave reviewers a small amount of time with Ice demo machines, this is a good thing. They flat out refused to offer anyone a chance to test the new Comet Lake parts. Why? Do we have to point out once again that they trounce the newer 10nm parts while using less energy to do so? And that they are no faster than the older parts they replace? Don’t take our word for it, Notebook Check actually got one to review and came to the same conclusion as we did.

Intel was so desperate to hide these inconvenient facts that they flat out said that we would not be getting numbers on performance until after the launch. Nor would we get pricing either so you can assume it went up by non-trivial percentages this time around. And launch dates, or lack thereof, were pretty glaring too. Some of the 4 cores may launch in the coming weeks but the 6-core, the only newish part, is way way off if it ever actually comes out. Come on Intel, why are you sinking this low?

On top of this there are a few more glaring omissions. The VNNI instructions that Intel keeps crowing about are not in Comet Lake, and thankfully Thunderbolt is not on the die this time either. Wi-Fi6 is on the chipset this time and it uses the same competition excluding CNVi interface so you will probably be stuck with sub-par Wi-Fi on 14nm parts.

So what do we have with this ‘new’ ‘family’ of CPUs? Ice Lake is being built on a process that is still abjectly broken, won’t yield, and the best parts are at parity with the older 14nm ones only when consuming 13W more. They kill the old parts on graphics though but Intel won’t allow anyone to test this so we will just presume it to be true. The rest is an exercise in hiding, hiding that the -Y SKUs aren’t new, hiding the fact that they have to compare 15W to 25W parts to eke out a win, hiding that 6C chips are only 16% faster than 4C chips best case, and probably more. The 10th Gen Comet/Ice/Whiskey refresh/Amber refresh ‘family’ is a big self-inflicted wound.S|A