Still no working drivers though

Yesterday AMD released the mid-range Radeon 5500XT card, a 1080p focused part. SemiAccurate would get excited about this but the state of AMD drivers makes us scared to recommend it.

What is the new Radeon 5500XT? If you are thinking the little sibling of the 5700/5700XT, right you are. This one comes with 22 CUs active out of 24 on die and runs at 1717MHz/1845MHz game/boost clocks. Unfortunately AMD didn’t bother to include the base clocks, Anandtech says it is 1607MHz and we believe that. Memory is 4/8GB of GDDR6 running at 14Gbps, and the whole board pulls 130W total. 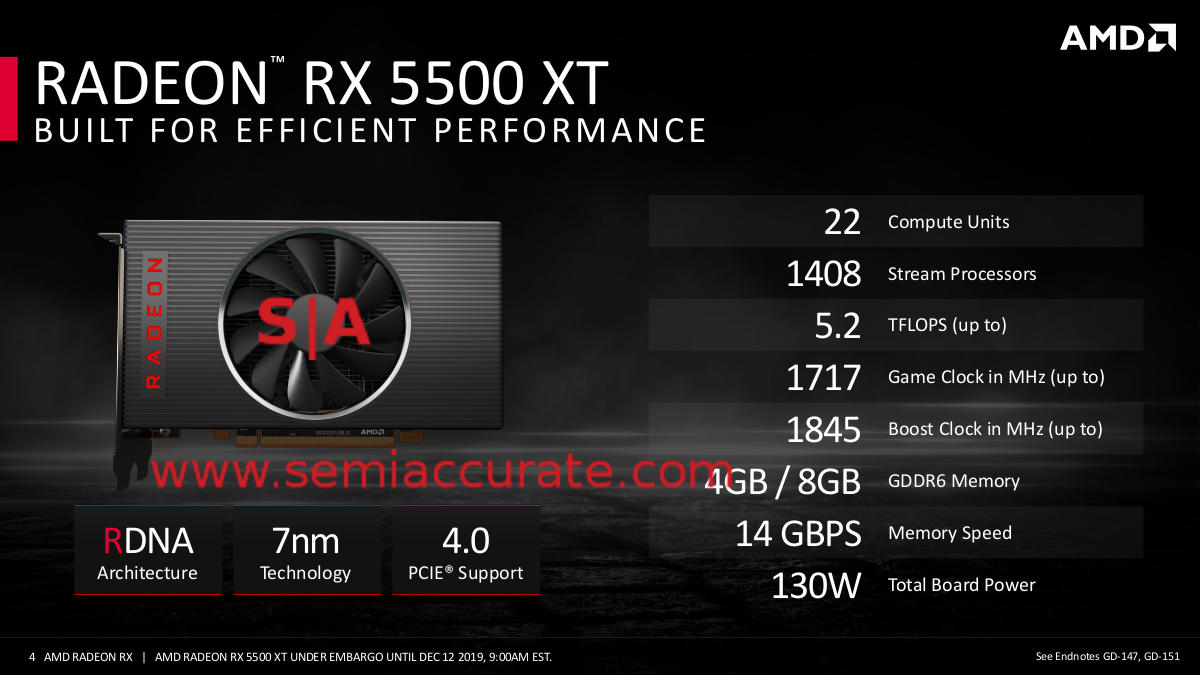 Other than that there isn’t too much new. The card is built on 7nm just like it’s predecessor 5700/5700XT, occupies 158mm^2, and has a PCIe4 interface. If you have an AMD Ryzen 3000 series part this means your latency will drop a little over PCIe3 based systems but that is probably a negligible gain. In any case it does bode well for future GPUs and makes a strong argument for an AMD/AMD CPU/GPU pairing. AMD annoyingly didn’t include the price in the briefing but released the $169/199 numbers for the 4/8GB models respectively at the last minute. Way to annoy reviewers trying to make a price/performance analysis, once again own goal.

That brings us to the last problem and it is a showstopper, drivers. AMD’s drivers for the 5500XT are quite literally non-existent. This is the same problem that SemiAccurate had for the 5700/5700 XT at launch which lead to us not writing it up at all. We had the cards but they don’t work well without drivers. While we briefly considered writing a review with the cards in VGA mode with software rendering, we decided against it because it wasn’t worth the effort.

Now step forward almost six months and the drivers for the 5700 and 5500 lines still don’t exist. OK sure there are drivers for Ubuntu 18.04.03, and ONLY for Ubuntu 18.04.03, nothing newer. If you want to downgrade your OS to run a GPU, feel free, but you shouldn’t have to. This lack of drivers months on is downright shameful, avoid modern AMD GPUs like the plague until they get the basics of their drivers fixed. Intel was in the same boat about two years ago but they have unquestionably fixed their issues and now are the gold standard in this regard. AMD isn’t in the game, Nvidia is in the middle.

So in the end what does it come down to? AMD has a potentially interesting lineup with their 5×00 parts and the 5500XT would probably be a good addition to a 1080p gaming rig, especially the 8GB version. That said until there are drivers posted that will do more than light up the screen, we can’t say anything useful other than recommend you avoid the problem.S|A

Note: A few weeks ago, SemiAccurate publicly bitched about the complete lack of drivers on AMD’s site. This lead to some drivers being posted but again, they are for OSes that force a significant enough downgrade that we can’t recommend you do it. AMD has made some statements about RDNA based drivers being in the kernel now but that just means you can’t update your drivers, can’t fix bugs, and can’t use these cards in a sane manner. We laughed at Intel when they were making the same excuses, now it is AMD’s turn. If they don’t consider it worthwhile for a gamer to be able to upgrade their GPU drivers, why do they make such a huge deal about it on the Windows side? It is a sad state of affairs, ancient, non-upgradable drivers should not be forced on customers. If I were looking at AMD cards for compute/servers, this would take them out of contention.