Intel’s honesty shows through at Computex 2021

Intel just doesn’t know how to stop digging and Computex is a shining example of their corporate dishonesty. SemiAccurate was going to write about their tepid offerings this year but the company once again snatched defeat from the jaws of mediocrity.

In case you are confused, Intel PR has a long history of playing petty power games and being, well, flat out dishonest in some ways. With the recent change of regimes, we thought this level of childish self-inflicted wounds would wither away or at least slow down. Nope, our hopes for adult behavior were dashed at one of the first opportunities, so bravo Intel, you exceeded expectations in at least one regard.

So what is the brilliance that changed the topic of this article? Simply put Intel is launching two new SKUs of the small Tiger Lake 4C CPU and a rebadged Mediatek 5G modem module, more on that later. They sent SemiAccurate the PDFs a few days ago and we then asked if there was a briefing. The reply was, “No briefs this round however everything will be announced at Intel’s keynote at Computex.” which is fair enough, not everything has or needs a briefing.

The problem is that there were briefings and SemiAccurate was excluded. More problematic is that we knew about the briefings before we asked, we actually wanted to hear what Intel had to say. Yes that is DSM-5 listed criteria for masochism but sometimes you just have to do it. We asked knowing we were not included and then Intel lied to our face likely thinking we didn’t know about the briefs. Silly Intel.

This is a problem because a company with adult supervision should never do this. Instead of playing petty power games, they should just say, “We don’t want to brief you” or, “You aren’t the target audience for this type of briefing”. What you should never say is, “No briefs this round however everything will be announced at Intel’s keynote at Computex.” because it is untrue.

Being dishonest with the press is one thing but doing it to investors and analysts is quite another. We would like to say that Intel doesn’t cross that line but based on recent conversations with several investors in Intel, the facts that more than one are cross checking with us in private lead us to a different conclusion. Parse every word carefully people, we can’t say they lie without hearing the exact quotes but the second hand stuff we get is… just check every word they say.

Why does Intel keep doing this? We don’t have a clue. Worse yet we can’t see an up side to these petty games they insist on playing, just down sides. Yet it continues. If anyone out there can shed any light one this, feel free to email the author, we are genuinely perplexed.

One reason Intel might be doing this is the message is… is not one that will survive any scrutiny. That means you don’t allow any non-tame journalists to see it ahead of time so the message that gets out on embargo lift is closer to your talking points. By the time the real story come out, it is buried so far down on the Google page no one cares. We think that is the case this time so lets take a look at the tepid releases from Intel at Computex 2021. 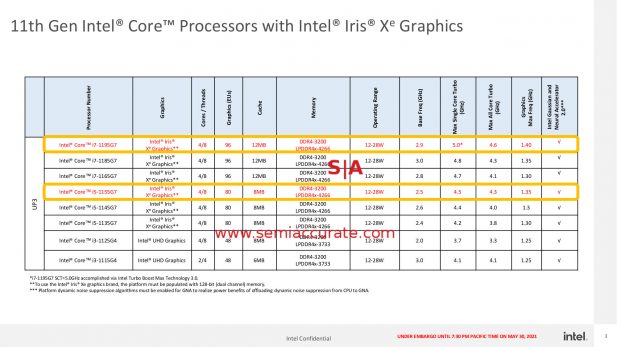 As you can see there are two new 4C Tiger Lake CPUs, the top end i7-11995G7 and the i5-11955G7. The top 11995G7 is a minor tweak up with the peak 1C turbo only available for a few seconds with a mode no one bothers to implement because the gain isn’t worth the pain. In any case two new bins is nothing to write home about but some may care. Like we said tepid.

SemiAccurate won’t rehash the last six months of performance messaging from Intel but suffice it to say they claim victory over AMD with their 4C and 8C Tiger Lake CPUs. Their graphs and comparisons are a tad skewed and don’t hold up to independent testing by non-tame sites, but Intel continues to make the same curious claims at Computex. Don’t believe the spin, AMD beats Intel like a drum in everything but proper disclosure. 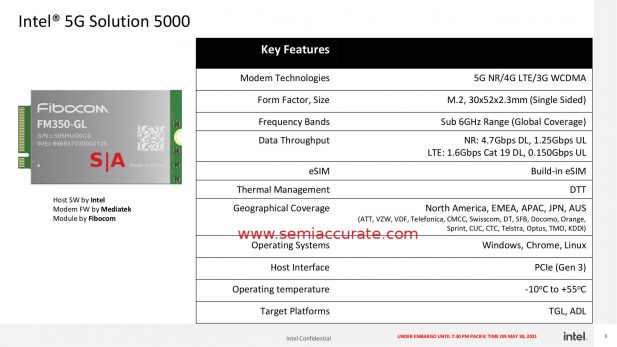 The last bit is actually quite exciting not because of what it is, but what Intel wants you to think it is. On the surface a 5G M.2 module that looks a lot like the one Qualcomm just trickled out last week. Qualcomm has a 5G world certified M.2 module and so Intel now has one too. Qualcomm makes their silicon, Intel uses, wait for it, Mediatek silicon. You remember Mediatek, the ones shouting about how they were way ahead of Qualcomm a few years ago but suddenly went radio silent about the time silicon was supposed to launch. It is here now with an Intel name tag on the module.

Qualcomm has a 5G sub-6 and MMWave on their modem, Intel has sub-6. And if history is any guide, the head to head comparisons between the Qualcomm and Mediatek silicon is going to be a laugh riot. Intel for some reason doesn’t mention MMWave in their presentations, no clue why.

The module itself is made by Fibocom, the silicon is by Mediatek as we previously mentioned, so what does Intel do? Some software. How much? They won’t say but it is unlikely to be the bits they want you to think they make. Remember what we said about not wanting critical minds to view their presentations before the official spin got out? This is an “Intel modem”, really they say so.

Just don’t ask about corporate uptake on a modem and it’s attendant crypto keys from a mainland module maker. Fibocom makes good stuff but the markets this 5G M.2 module is aimed at is fairly sensitive to geopolitical concerns, real or imagined. Putting a sticker on a module won’t alleviate these concerns and Intel know it so they don’t allow questions. The more things change the more they stay the same.S|A