ARM is outlining it’s new 2022 cores and blocks this week, plus a few roadmap and branding items added on top. SemiAccurate thinks ARM delivered a solid set of performance gains across all of their main offerings. 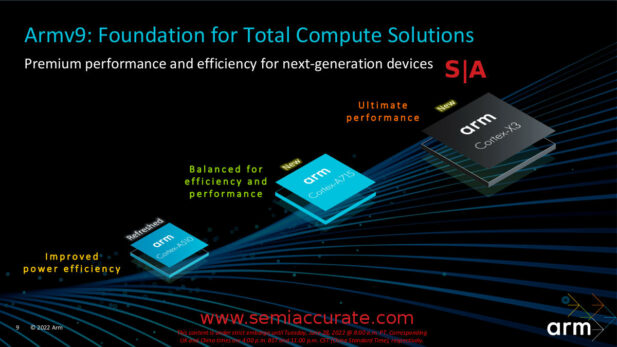 Lets start out with the headline items, two new CPU cores, the Cortex-A715 and the Cortex-X3 replace last year’s Cortex-A710 and Cortex-X2. On the low end the ‘small’ Cortex-A510 remains unchanged as the little in the big/little lineup. This isn’t an unusual step, previous little cores have crossed generations as well, they do the job at the required efficiency point so why rip and replace? 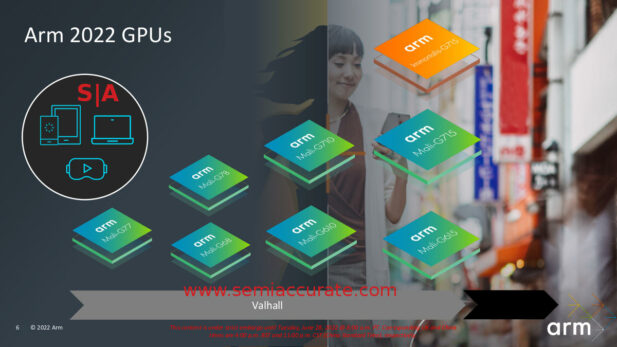 Note the new class of GPUs

On the GPU side things get more interesting with the advent of three new devices, the little Mali-G615, medium/high Mali-G715, and the gaming oriented Immortalis-G715. No we are not fond of branding like this but, well, there have been a lot worse. *COUGH*Optane*COUGH* The G615 and G715 are updates to the 2021 era G610 and G710 but the I715, our sanity preserving abbreviation, is kind of a new class of device for ARM. Despite the confusing name it isn’t just an upclocked G715, there are serious differences under the hood that we will discuss later. 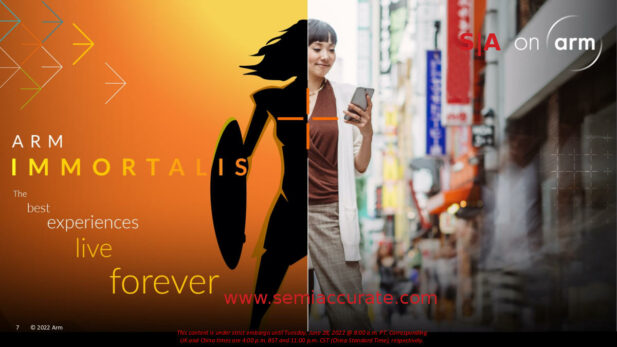 There have been a lot worse…

It is hard to talk about marketing without Immortalis, a name which rolls off the tongue like those bits of something you weren’t expecting in that bite of food you just took. It isn’t shards of glass but it isn’t quality chocolate either, just too many syllables four our liking. ARM is unquestionably trying to stamp it’s brand on the gaming set and with the rise of full blown ARM based gaming not-quite-phones, we get that it is the right time. The 715 in I715 is intentional so you would have to use the brand, something you may note we just cleverly avoided, to differentiate it from the G715. Given how different the two blocks are, this more than anything adds to SemiAcccurate’s annoyance but we will get over it. We hope. Also lawyers in Cupertino please note we called it I715 not i715 on purpose. 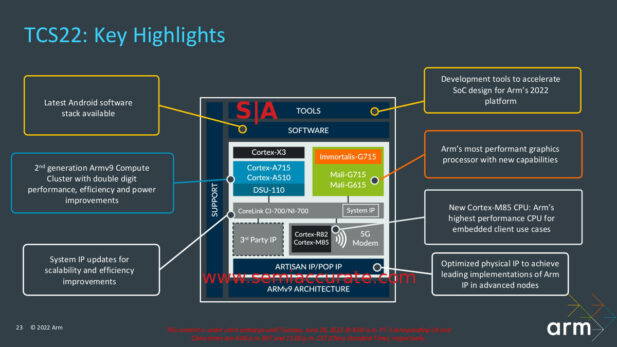 More interesting was something that the author can’t remember ARM calling out in the past, Total Compute Solutions or TCS. What TCS is is a group of best practice designs that ARM proposes for high end devices, basically a blueprint for chip vendors to build off of. The 2022 TCS is made up of the new CPU cores, X3, A715, and the old A510 coupled via the new DSU-110 cluster interconnect. More on that later.

As you can see the GPUs promoted are any of the three new offerings, the main system interconnect is the Corelink CI/NI-700, and various realtime units for system control. Add in 3rd party IP and you have a party which is not where the part of the term other than 3rd came from. We’ll wait while you reparse that bit, it hurt the authors head too. Vendors are free to add whatever they want or not take whatever they don’t want, it is their choice and part of the appeal of rolling your own design. The fact that almost no one does is rather telling, even Qualcomm has been using vanilla ARM offerings for far longer than they publicly admit to.

One Stack To Bind The All:

Probably the most interesting part of the whole TCS paradigm is the software stack. Tools are hard to make well and expensive even if they aren’t done right. ARM’s software stack and tools are by all accounts pretty darn good and if you use TCS, all the pieces are supported right out of the box. Anything you add to the layout is your problem or the problem of the IP vendor more likely. SemiAccurate questioned ARM extensively about how extensible the tools are and how additions or deletions are done with an eye on gauging the lock-in potential here. 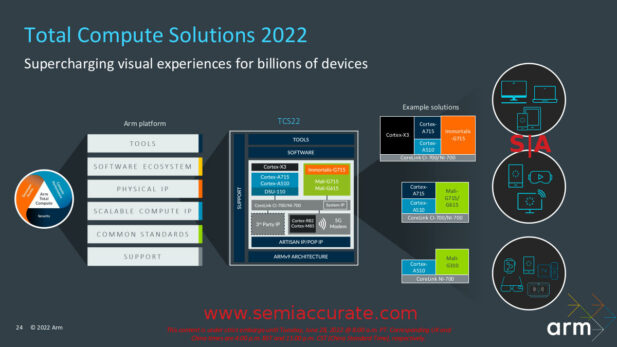 Software is a key to the puzzle

To our surprise the answer is not what some ARM competitors intone but don’t say outright on the record, you can add and delete stuff to the stack with a fair bit of ease, the APIs are there to add and delete what you want to the tool chain. This isn’t a task for the beginner but it appears to be well within the reach of anyone making IP blocks for an ARM or other design. The basic mindset is definitely not one of lock-in, it is more, “If you go your own way, the software and tools are also your problem”. This one is kind of hard to argue, if ARM didn’t offer TCS the same things would happen.

This is where things get a bit more fun with ARM doing the sane thing and revealing long term code names of cores, GPUs, and a lot more. SemiAccurate has been telling semiconductor firms for years to do this, there is no down side and you gain a lot of PR wins from the resultant online discussion and debate. With the obvious up sides and few down sides, well few companies do the rational thing. SIGH. 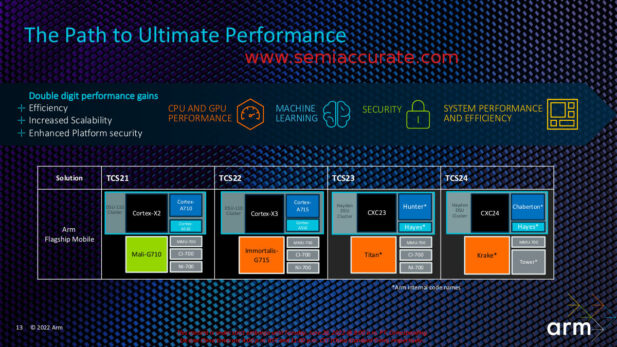 The future in one roadmap slide

As you can see there are a lot of code names in this slide starting with the 2023 and 2024 mainstream consumer CPU cores, Hunter and Chaberton. The high end has the aptly named CXC23 and CXC24 which are not nearly as exciting as their slightly lesser brethren. On the small core front, next year will see Hayes replace the not exactly venerable A510 and it will carry on for at least another year like past small cores. In short about what you would expect and now with specific names.

On the GPU front we have Titan and Krake in 2023 and 2024 respectively. Since these TCS layouts are for the high end of the smartphone realm, you can assume those names are for the top of the line GPUs, don’t be surprised to see smaller variants that may come with new code names.

Things get kind of interesting when you start to look at the ‘other’ bits like the DSU. Current TCS22 and TCS21 before it used DCU-110 but the ’22 version supports 12 cores now, more on that later but the TLDR version is the v9 cores are the enabler here. What is new is the block labeled, “Hayden DSU Cluster” in the ’23 and ’24 TCS diagrams. This is obviously a new DSU block which carries with it potential for some significant upgrades in functionality. No word on what that may be yet but keep an eye on this front, not the core count but the other capabilities that come with the cluster fabric.

The MMU-700 doesn’t change for the range of roadmaps presented which strongly indicates there won’t be a mainstream memory upgrade, protocol not speeds, or PCIe level from where it sits now. For the target market of the disclosed TCS, high end phones, this isn’t a big surprise, especially on the PCIe front. That said if there is anything out of the ordinary, a designer can always add different IP if they want.

Last up we have the box labeled, “Tower” on the TCS24 diagram. This replaces the CI-700 and NI-700 system buses, essentially the glue that ties all the other blocks together. Things like this are often overlooked but when they are upgraded rather than iterated on, that indicates significant added functionality. Given how the CI/NI-700 interconnects touch every part of the system and are critical to things like SoC security, again keep an eye on this one. More intriguing is that ARM is upgrading the DSU fabric in 2023 but the system fabric in 2024. That gives a few clues on what may change, or at least what boundaries there are on those changes, but not enough to do more than speculate.

So on the news release side, ARM has now released two new CPU cores, the Cortex-A715 and Cortex-X3, plus three new GPUs, the Immortalis-G715, Mali-G715, and the Mali-G615. On top of that the cluster size is raised from 8 to 12 but is still on the ‘old’ DSU-110 interconnect. Then they laid out their vision for the high end phone market for 2023 and 2024 with lots of new code names and perhaps more importantly new fabrics to underpin the whole SoC. This is the first article in a series and obviously covered the ‘what’ and is not very technical. Part 2 of this series will dive into the details of how ARM is accomplishing what they released today.S|A