There have been a lot of stories lately about AMD’s future. One rather overlooked story is how AMD is moving forward with its fabless supply chain strategy. AMD’s John Docherty had a few choice comments on topic during his presentation at last week’s Financial Analyst Day, “Fabless work for AMD. … I am going to repeat what you heard this morning, 30 million Brazos, 10 million Llano, albeit was late in the cycle, but it was 10 million that we produced last year, and the world’s leading GPU. So fabless works.”

The argument that Mr. Docherty is making, is that AMD made the right choice when it moved to a fabless model. AMD’s ability to produce APU products not only at Global Foundries, but also at TSMC, and the flexibility that it gives AMD, proves the merit of the fabless model.

In light of the issues with yields that AMD’s Llano had on Global Foundries 32nm process in previous quarters many have been wondering to what degree these troubles have damaged the relation between the two partners. Mr. Doucherty addressed this issue directly, “So it’s a two way partnership, we get and they get. And by the way it’s not always rosy. Those of you that think about this, it’s not a date, it’s a marriage. And anybody that understands that knows that’s not always rosy.” The take away here is that a strong partnership between AMD and Global Foundries is beneficial for both companies. “And they are not, again let me repeat, they are not always pleasant meetings [with Global Foundries]. Sometimes they are; in fact let me assure you they’ve gotten more pleasant in the last quarter, then they were in the previous quarter.” So despite tensions over poor 32nm yields last year, and the good die pricing agreement from early last year, AMD and Global Foundries are still focused on working together in a mutually positive manner, especially as Llano yields have improved. 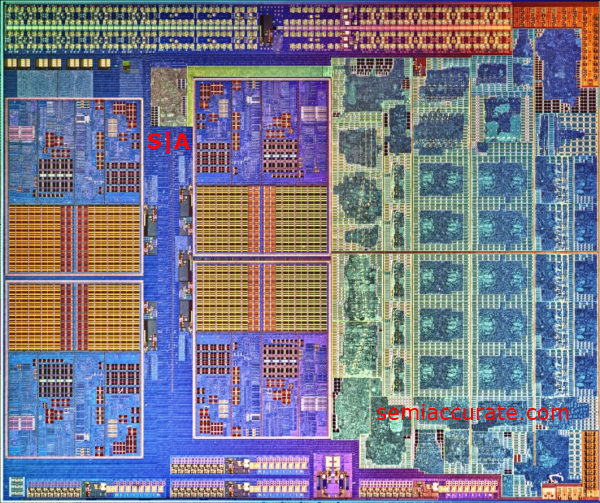 Of course the most interesting part of this presentation was the Q&A segment where Mr. Docherty answered a number of lingering questions, beginning with 28nm yields. “How do I feel about our 28nm experience on Radeon; so graphics products. My response to that is that I feel very good. We’ve come out of the shoot running, our yields are bang on where we predicted them to be, and we are supplying product to the market today.” Based on this it’s fair to say that AMD is pretty confident in its ability to produce chips on TSMC’s 28nm process.

From there the discussion moved to the 45nm supply problems that cost AMD dearly in the last two quarters. “There was two things. There was huge demand on 45nm, normally we would have had inventory. But the demand was very significant, very quickly, and for the channel business.” He continued saying that the lack of 45nm supply was due to “… an unprecedented demand spike on an older technology, which surprised us.” When the analysts pressed him a bit further he added, “If you guys know wafer fabs you know that there are multiple opportunities to screw up, multiple, everyday there is something new. It was a misprocessing event, I’d rather not talk about that, but it was a misprocessing event by our partner.”

AMD’s 45nm supply issues have been a topic of much interest in the last quarter. I think few people, including AMD, predicted that the full roll out of AMD’s top to bottom 32nm line-up would actually boost the sales of its 45nm products to the extent that they did. Part of this may be due to customers, particularly in the channel as Mr. Docherty noted, opting to use Phenom II based products over AMD’s FX chips.

Notably AMD experienced a somewhat similar increase in older technology sales when it transitioned from the 65nm process to the 45nm process in early 2009. Evidently, the bump in sales that 65nm Phenom processors got when 45nm Phenom II parts came out was on a different magnitude of scale from the sales bump Phenom II processors received from the launch of AMD’s FX chips. Mr. Docherty put a bit of a silver lining on the whole situation saying that, “The main thing for us is to learn from it, and that is to some extent the cost of learning. It did hurt us a lot in Q4, but there has already been a full recovery.”

Continuing on the topic of AMD’s wafer supply agreements with its partners, Mr. Docherty was asked to describe AMD’s agreement with its foundry partners. “We purchase finished wafers. Post sort, but in fact it’s different models, it’s different models for different ways of doing it. Right now people talk about how last year our WSA [wafer supply agreement] was actually finished good from Global Foundries, with our other suppliers it’s actually; we buy wafers that are expected to yield a certain percentage.”

A little gem occurred about two thirds of the way through the presentation when Mr. Dochetry was asked about AMD’s plans for the 22nm node (hint: AMD’s skipping 22nm and going to 20nm), and the validity of blogs claiming that AMD’s 28nm yields were low (they’re not). “Let me just reset to the question that was asked earlier, I am very happy with my 28nm GPU yields.” And in a statement that I’m sure will be the bases for countless bad puns he continued, with a smirk, “And so sometimes blogs are accurate, sometimes they’re not.” It seems that some sites may be Semi-accurate, perhaps?

On the topic of 22nm, Chekib Akrout, AMD’s Senior Vice President of Research and Development, chimed in that, “After 28nm, by the way, we are looking to 20nm, we are not looking to 22nm.” He argued in favor of this decision by saying that, “Between 28nm and 22nm there is not enough … for us to justify the move to that 22nm node.”

One of the questions broached the topic of design inter-changeability between foundries. “[How long does it take] To transition your designs that were originally architected at Global Foundries, to make that move, over to TSMC, or vice versa for that matter.” The lowly analyst continued, “It seems that it’s not as simple as many of the blogs have made it out to be, that later this year we’re going to have, you know, follow on-s to Interlagos coming out at TSMC.” And with a Scottish accent reminiscent of certain cartoon character, Mr. Docherty responded, “Like I said, don’t believe all the blogs.”

Mr. Akrout finished the question and gave some color to the switching process, “For the design and development part it is roughly between nine and fifteen months. And the reason it’s a range is because it depends on the design style, if it’s fully synthesizable (Read: Brazos) you can just kind of drop the new library, it can go very quickly, that’s nine months. … And it could be up to fifteen months when you talk about a very highly customized microprocessor (Read: Bulldozer). … It takes a while; these are not just things you can decide that tomorrow I’m going to go to another foundry.”

Switching foundries is a topic that has come up quite often in discussions of AMD’s GPU lines. But it seems that AMD will not be making a decision like producing GPUs at Global Foundries, or making Server CPUs at TSMC, lightly.

Back yet again to the topic of 28nm, an analyst tried to tease more information from the session, “I am going to try and re-ask the question on GPU 28nm to see if it’s High-k or SiON, because TSMC supplies both.” He followed that question up with an even more important one, “Your roadmap this morning laid out 28nm, in 2013 across, almost all of your products. Will you lean toward a more High-k [process], or more SiON [process], or a mix?” The answer to these two questions was both short and firm from Mr. Akrout, “Since you asked twice we are going to get you an answer. All of them are in the High-k metal gate. Across the board.”

AMD’s Financial Analyst day was most certainly the beginning of new era for AMD. Execute, execute, execute, was the mantra heard across AMD HQ. And while the outcome of all these roadmap changes and restructuring efforts remains to be seen, AMD is talking openly about some of the technical choices that they are making to address the new roadmap and how that affects their supply chain. Hopefully AMD’s renewed focus on execution will pay off in the long run; stronger competition is never a bad thing.S|A