Tegra T37/AP37 pops up on the Nvidia roadmaps

Like clockwork, twice a year revisions come with spring

It looks like someone at the top of Nvidia is getting all worked up, after all, it is roadmap revision season. Semiaccurate’s moles sitting across the San Thomas Expressway with parabolic microphones painted to look like daisies have said there is a new part named T37/AP37 on the maps now.

As we said earlier, the Tegra roadmap is subject to JHWBR (Jen-Hsun Whim Based Revisions; pronounced dah ee zee s), and this tends to happen about twice a year. The last one added T35 in October or so, and that line was then to be called Tegra 4. That may or may not still be the case, but given the magnitude of the other changes, who knows, it may yet change again.

This time, the JHWBR added T37, also called AP37, most likely an update of T35, itself a shrink to 28nm of T30 aka Tegra 3. Confused yet? Me too, but thanks to the ever vigilant mole community and their ‘daises’, we have some ideas about this one. We had originally heard it was a T35/T40 hybrid, IE the T40 GPU and uncore with an A9 CPU. This rumor didn’t pan out, and it looks like T37/AP37 is not much more than a speed bumped T35. 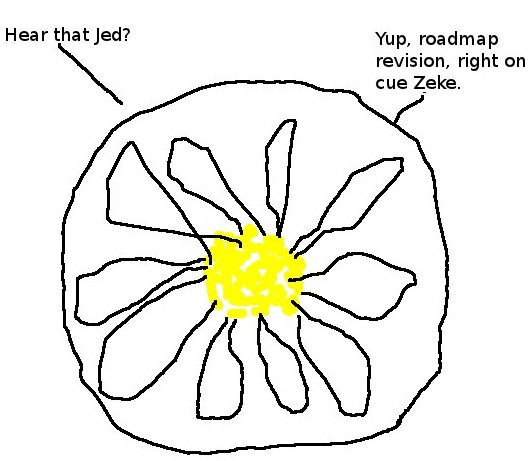 If you recall, Tegra 3 missed it’s performance goals by huge margins, and that prompted T33, a speed bump. It is likely that T37 is the same sort of update for T35, basically a re-layout to drop power and bump speeds. We have differing reports on whether or not this adds a radio on die, but the speed bump is pretty much assured. The radio could be this or a different part.

One thing all our sources agree on is the speed and timing. T37/AP37 is now slated for June at 1.7GHz, presumably 4 cores. Given Nvidia’s marketing based spec sheets of late, this 1.7GHz is most likely max turbo for one core, not base frequency like everyone else quotes. Lets wait and see if they can actually hit the desired frequency for volume silicon though, T30 didn’t come close.S|A