Image quality that is…

With the launch of Intel’s Ivy Bridge based desktop CPUs last week we here at S|A, and numerous other reviewers, have spent a lot of time dissecting these new, if somewhat “meh”, chips. One of the biggest question marks we’ve had on our minds is the impact of the HD 4000’s (the GPU side of Ivy Bridge) notably inferior Anisotropic filtering quality.

This is an issue that can be observed plainly by looking at the results of the synthetic filtering test that most reviewers touched upon last Monday. 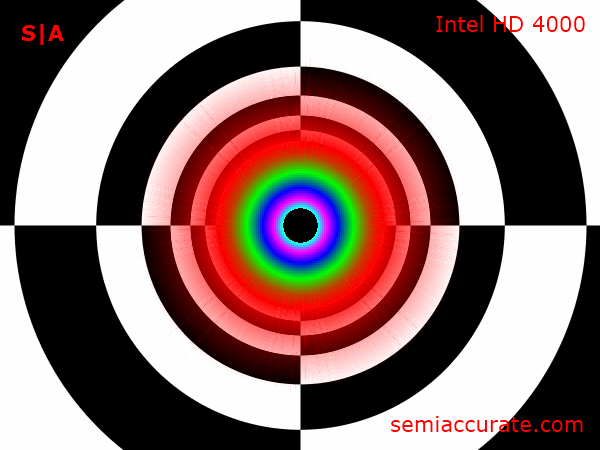 If you look around the outer edge of the red colored zone you’ll notice that instead of appearing smooth like the inner colored circles there are white and red lines protruding out toward the edges of the image. Needless to say those lines should not be present. 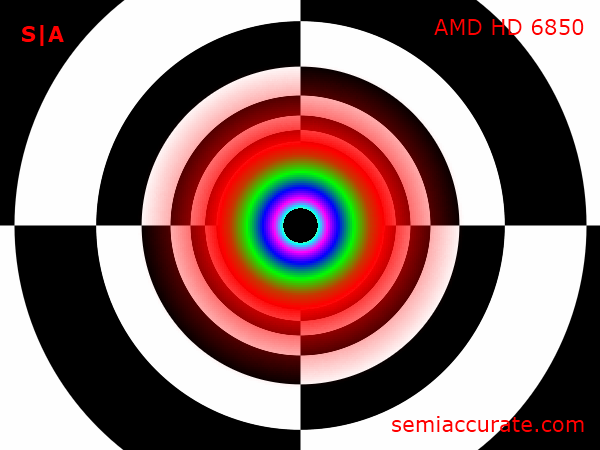 Looking at the same test on an HD 6850 we can see that this is not a problem that affects last generation hardware from AMD. But with this knowledge in hand it’s important to remember that issues of this nature are not always apparent to the end user.

To that end we decided to try and find cases where the image quality of the HD 4000 was notably inferior to that of AMD HD 6850 at the same in-game quality settings. To do this we reset Intel and AMD’s graphics control options back to their defaults, and then took screen captures of  images being produced by each GPU, at the highest possible in-game settings, so we could compare them and look for issues.

Looking at this section of ground we cropped from a 1080P screen shot, we can see that the difference in texture quality is imperceptible in Bad Company 2.

Moving onto Crysis there appears to be no difference in either texture quality or overall image quality when comparing screen shots from each of these GPUs.

Much the same story as our prior two games, Portal 2 exhibits no loss of image quality on the HD 4000 when compared to the same game on the HD 6850.

Now it should be noted that none of these games were playable on the HD 4000 with the very taxing graphical settings that we chose. But at the same time there was no discernible difference in image quality between Intel’s HD 4000 and AMD’s HD 6850 when comparing screen shot between the two at the same in-game quality settings. Only in synthetic benchmarks designed to specifically show these kinds of image quality issues do they become apparent.

So what we’ve really found here is that on the list of points to argue against HD 4000, inferior image quality is probably the weakest you could choose.

If you’d like to read more about our testing with the HD 4000 you can check out our two part review and our comparison of this new chip to one of Intel’s previous generation offerings.S|A