The first Trinity board of Computex was shown off by Gigabyte, but that wasn’t it. They had three boards of note, each with a new feature or two to talk about. 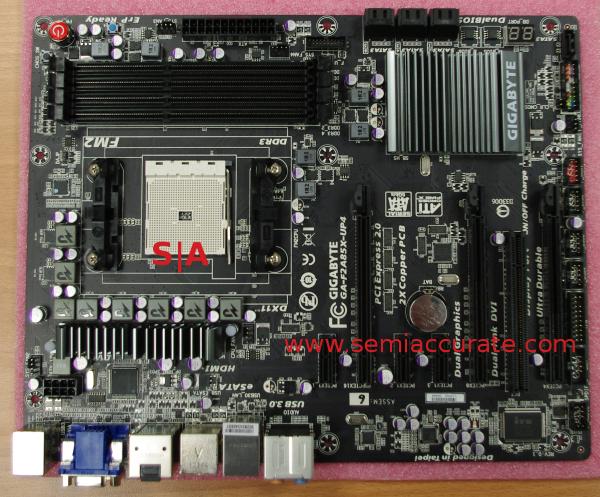 If you look at the GA-F2A85X-UP4, you immediately see the new FM2 socket, Llano’s won’t fit here. The main differences are minor, sensors, voltage planes, and the like, nothing you would ever see on a marketing slide. If you look at the power tricks of Trinity, you get why the new socket is necessary. Other than that, it is a solid mid-range board. 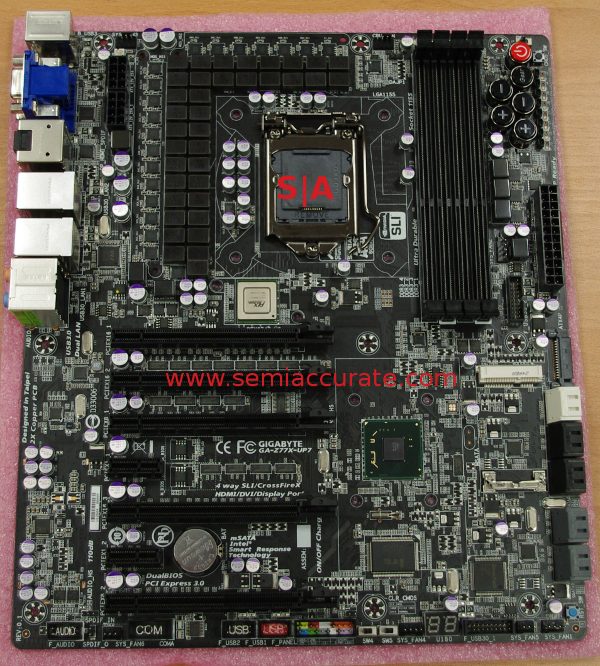 Next up the stack is the high end mainstream GA-Z77X-UP7. As we said earlier, the -UP name now denotes UltraDurable5, the 7 is the highest end enthusiast line. What does the Z77X bring to the table? Four PCIe3 slots courtesy of a PLX PCIe3 chip, either two 16x or four 8x slots. Unlike the GA-X79S-UP5, this one has slots spaced for four dual slot GPUs.

The best part of the board is not the new 32-phase power, that has been done before, but how it is done. More interesting is the lack of MOSFETs, this one has the power run through 32 stages of IR chips, basically extremely efficient, one unit power chips. IR3550s are the exact model, and each one can handle a whopping 60A, so more than enough to power a hair dryer and an overclocked CPU too.

Because the power chips Gigabyte picked for the GA-Z77X-UP7 are so efficient, 95% peak for the IR3550s, they run cool. If you are not overclocking like mad, you probably don’t need a heatsink on the power stages, but there will be one on the final product. Why? Notice the two 8-pin power connectors on the bottom, and a SATA power port in the lower middle that feeds the GPUs directly through the slots.

If you do overclock this board, there are six hard buttons on the bottom, five of which are dedicated to overclocking. There are also eight voltage probe points below them for real-time readouts, and a low profile CMOS clear button should you misread something. If that isn’t enough Gigabyte included a hard BIOS switch, and a physical override switch to stop BIOS failover on crash. This can be a boon for overclockers, potentially cutting reboots in half.

Moving down the Ivy Bridge stack, we have the GA-Z77X-UP4 TH, the Thunderbolt/Dark Peak version of the normal GA-Z77X-UP4. Thunderbolt is Intel’s abusive competition lockout tool that doubles as a slow incompatible USB knockoff. There are two TB ports on the -UP4 TH, so Gigabyte is using the high end TB chip. It will be interesting to see the price difference that the TH suffix brings with it. Thunderbolt is a bad idea, and adding it to a good board doesn’t change how broken it is. At least it is a reassuringly expensive cost adder.S|A