Gigabyte is bringing back a product category that many enthusiasts have wanted for a long time, an overclocking workstation board. All we at SemiAccurate have to say is, “It’s about damn time”.

The GA-X79S-UP5 is the board in question, and it is nothing short of a higher end enthusiast board with all the features you want from a workstation. Take an Intel eXXXtreme (Socket 2011) iSomethingmeaningless CPU, or whatever it is called this week, and add ECC memory. Voila, modern ‘workstation’, right?

Well, no, you need to do more than that for a real workstation. If you recall, most high end PCs used to have ECC as an option, then Intel started to abuse users by arbitrarily removing features from their CPUs, and selling them back to you as a ‘feature’.

There is absolutely no technical reason for this, it is sheer monopolistic power games. Why? If you want most of the workstation features, you have to buy a Xeon, and that costs 3x as much for the exact same chip, no difference other than the fuses that Intel chooses not to blow. Yes, you read that right, Intel has to do more work and testing to cripple the low end CPUs. 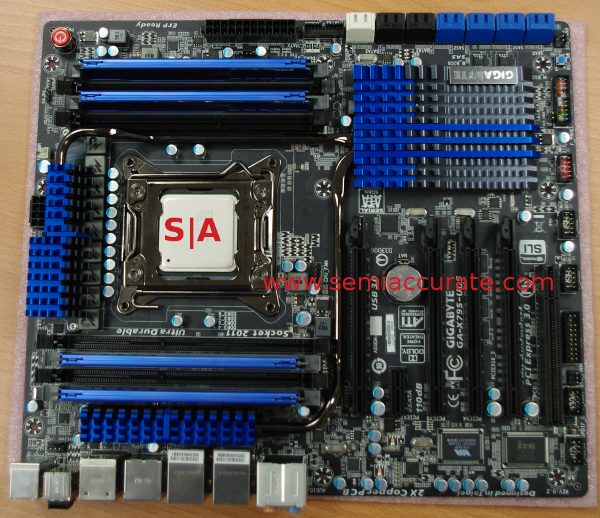 Luckily, Gigabyte comes to the rescue, sort of, with the new GA-X79S-UP5. Before you point it out, we know the board says UD5, as in Ultra-Durable 5, but the new naming convention from Gigabyte is Ultra-Durable = -UPx. I can’t explain it either, other than this board is an early prototype that was made before the name change was finalized. Expect the D -> P as well as a few other thing to change before it is released for production.

That said, notice the eight blue SATA ports? They aren’t SATA, they are SAS, there are four more SATA 6Gb and two SATA 3Gb ports are beside them. This is getting mighty close to ‘enough’ storage for the average user, but should you want a lot of speed, more SAS drives are a good thing. Workstation users can run RAID5 or RAID6 arrays directly off the board, but you might want to consider an LSI card if your work is mission critical. To this, add in eight DIMMs, a hard power button (Editor’s note: Yay!), and a VIA USB3 chip for lots of USB3 connectivity, and you have one fine X79 board.

Except it isn’t actually an X79 board, it is an C606 Xeon chipset. Because of this, ECC isn’t turned off, and you can put a 150W 1S Xeon on the board if you want, or stick with a 3900 class desktop part. Anyone want an 8-core gaming rig? How about some of the LV/ULV options that aren’t available in iSomethingmeaningless S2011 form? The possibilities are far from endless, but it does open up some really tasty options that Intel deemed not available before the GA-X79S-UP5.

Better yet, as the power button might hint at, the -UP5 series is a high end Gigabyte enthusiast board, so all the Gigabyte BIOS and overclocking features are in there from the beginning. If you need single threaded performance, something a lot of people care about, you can tweak the board for that. Workstation boards are notoriously lacking in the basic tweaking tools, some companies think that the market doesn’t care about squeezing out performance anymore. Obviously, Gigabyte doesn’t agree, and aren’t you glad they don’t?

Could it get better? Sure, notice the four PCIe3 16x slots? Sandy-E/EP only has 40 PCIe3 16x lanes, so they will be 8x if you use all four, but the possibility is there. There are Crossfire-X and SLI logos on the board too, but you can ‘only’ do 3-way GPU tricks on this board, probably because of physical spacing on the slots. The GA-X79S-UP5 breathes life in to a market long given up for dead. Lets hope it is the first of a long line.S|A