The most awkward moment of Computex came at the Antec booth, and it blended an old friend, a new product line, and massive sarcasm. The new product was one of the many that Antec had, they are back, and have lots of goodies to show.

It started out with meeting a friend at the Antec booth, and instead of the usual tour, we went and sat down. He was going to give me the interesting bits away from the crowd, then go fight our way through the mob to the parts that I was interested in. Moving by the desk that guarded the seating area, the friend offered me a drink and some kind of cleaner. I declined both and made a crack about only liking Antec (R)(TM)(C)(P) brand cleaning products. 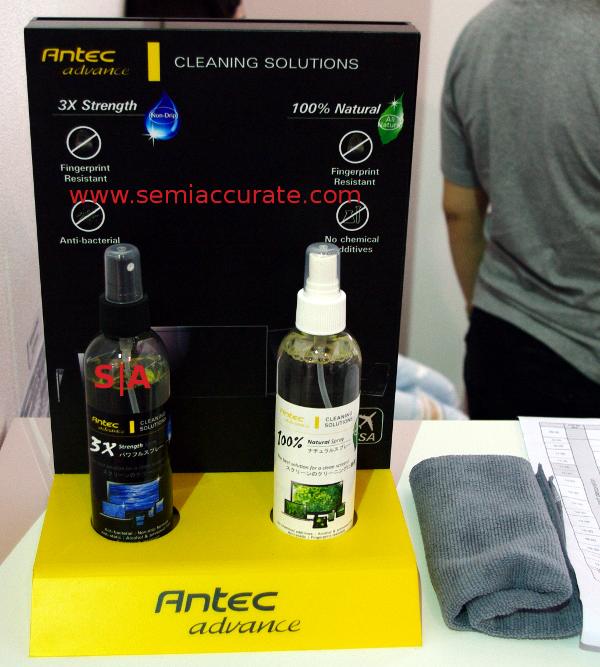 Wouldn’t you know it

I got this stare, you know the one. I looked, and sure enough it was an Antec branded dispenser. “No, not a trade show promo, but a real one” I replied. “It IS a real product, we have a whole line of them, see?” and he pointed me toward the display below. Doh!

In the following conversation, I learned that Antec now makes cleaning products, a whole line of them. Why? Because they can. Because it will not harm the finishes on their cases, PSUs, and other things. Because people actually wanted them. And because, well, why not if there is money in it. Needless to say, I felt stupid, and Antec has a line of 100% natural cleaning products, I know that now.

From there, we went out to see some new Antec sound products, not the speakers and subwoofer combos that they have been doing for a while now, but smaller and more bluetoothy products, namely the Iso and Mix. 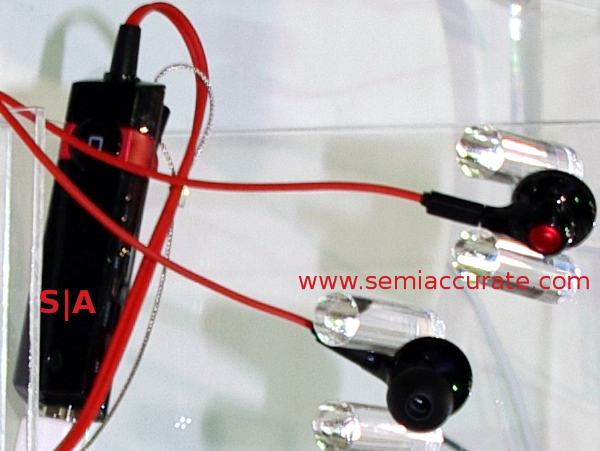 Iso does not appear 9001 certified

I was a bit sceptical of the Iso headphones, not only because I hate earbuds, but because they usually sound like the tinny toys they are. Antec was claiming that they are the first Bluetooth based active noise canceling in ear headphones. Yes, there have been active noise canceling buds before, and non-active Bluetooth buds, but not both that I or the Antec people I talked to were aware of. They are pretty nice, comfortable, and sound much better than I thought. On top of that, they cancel noise for planes and cars, but until they are not earbuds, not for me. If you can stand earbuds, you might want to give them a look, 8 hour claimed battery life and $99 MSRP are both pretty attractive.

Next up is the Mix Bluetooth speaker system. it is one of those compact speakers that seem to sound much louder and fuller than they should. This rubberized black speaker with red accents is a bit smaller than a brick, much lighter, and has a claimed 10 hour battery life, something no brick can match. It also has a microphone, so you won’t miss calls, and can use it as a speakerphone. If you leave it plugged in, it could be a nice conference room accessory too, not a bad little device. 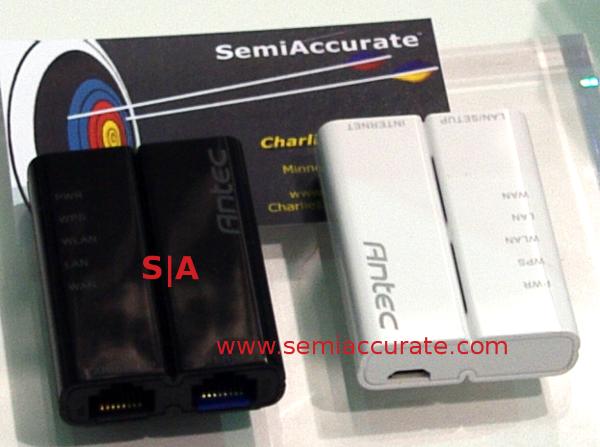 I do so want one in black

Next up is something much more towards what you expect Antec to make, the Travel Wireless Router. This little, smaller than my business card, $40 router will do 300Mbps 802.11n, wired, wireless, and USB connections, and Antec says it will support most wierdo VPN types just like a normal router will. It weighs next to nothing, is easily pocket-able, and should be in every road warrior’s bag. Looks really good.

Last up is the thing Antec is probably best known for, power supplies. This time, they had a 2300W PSU that could supply 192A@12V and has 16 PEG connectors. How? Chaining two PSUs together with something they call OC Link, a brilliant little cable that allows one PSU to control another. 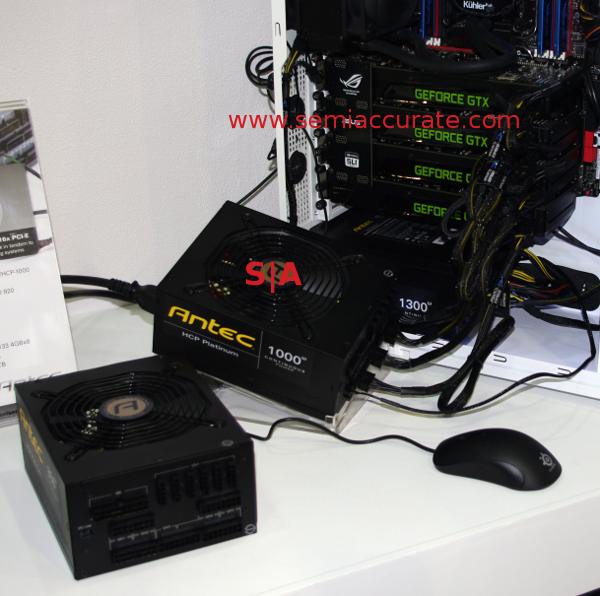 OC Link is quite useful for the lunatic fringe

The insane OCers out there, and those building positively silly systems with more than four GPUs will appreciate the flexibility the OC Link brings. It uses an updated version of the HCP Platinum line with 850, 1000, and 1300W 80+ Platinum certified PSUs offered. Chaining a 1300W and 1000W will get you the totals above, and you can probably do two 1300Ws together if you need more.

If you have been wondering why you can’t just do this without OC Link, there are some very good technical reasons why it is a bad idea, but we won’t go in to the EE side of the problem here. That said, the problem is a bit trickier than it sounds, and Antec seems to have solved the problem with the magic in the OC Link. Here’s to thinking outside of the box.S|A