Pretec has some really innovative SSDs and flash devices

Computex 2012: Just when you thought you had seen it all

In a Computex that was full of minor steps, Pretec was a standout with several new ideas, and a few new takes on older ones. All in all, they had by far the most innovative memory products at the show.

The first thing that we saw at the booth was the Wireless Storage System. Instead of the usual HD + Wi-Fi + battery in a plastic case, Pretec did something unusual. Contrary to what the name implies, the Wireless Storage System doesn’t actually have any storage, but it does have Wi-Fi and batteries, 1650mAh for a claimed 4 hours of use. It does however have an SDHC slot and a USB port, the idea is you can plug in whatever storage you want to use, and it becomes a wireless card/USB stick reader. The device also doubles as a normal USB2 card reader when you have it plugged in to charge. Neat, eh? 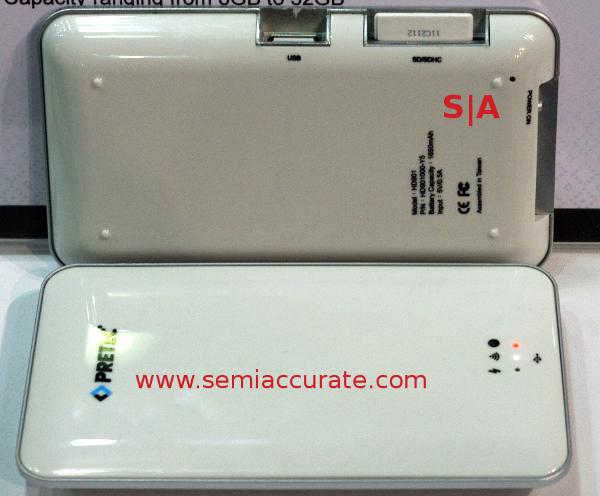 Plugged in to the top one you might have noticed the white SD card. This is a Pretec Y5, and comes in 8-32GB capacities. The twist on this card is that it has Wi-Fi built in just like the Eye-Fi card we think is quite nifty. The main difference is that the Y5 has 4x the capacity, probably nowhere near the price, and lacks the Eye-Fi’s software suite. What Pretec offers for software will determine the success or failure of the Y5, but if you can write a basic BASH script, you should be able to do a lot with one regardless.

Probably the best thing at the booth was the MegaSafe 2.5″ SATA2 SSD with hardware AES encryption. The MegaSafe comes in sizes up to, wait for it, 128GB, so it is small and by modern standards, slow. If you are wondering why this is worth a second look, much less a ‘best’ label, take a look at the little dongle out of the top 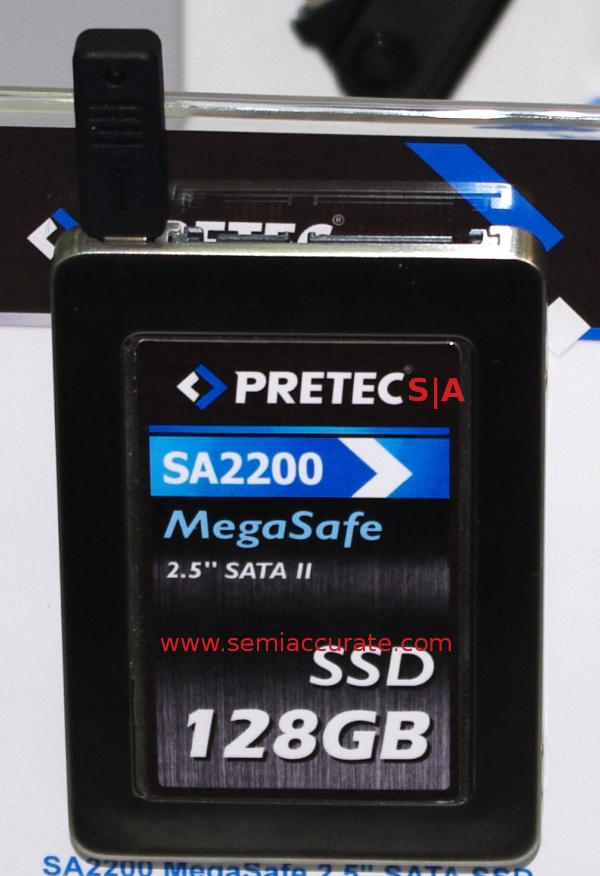 The MegaSafe SSD has a hardware key for the AES, not the normal software key in memory. If you want to get anything other than gibberish off this drive, you need to physically have the key stuck in it. You can always use a software solution on top of that, Microsoft’s backdoored version or an actually secure one, that should work fine.

In SemiAccurate’s opinion, the MegaSafe is a great idea, we only have one gripe, the physical key location. It precludes use of a MegaSafe in a laptop or anything with a hot-plug backplane. With a second port on the rear, not to mention SATA 6Gbps, plus larger sizes, we would recommend the MegaSafe to almost anyone. If you make a corporate policy of this dongle placed on a lanyard attached to a nose ring as mandatory punishment for the third password reset….. 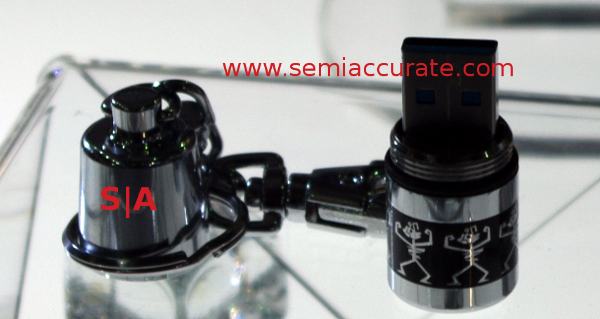 Moving back to the ordinary, we get to the Pretec Vault USB flash stick. It is nothing unusual, just a waterproof, rugged, metal encased USB stick that now comes in USB3 flavors. The form factor is nice, and it looks good. The only down side is that Pretec no longer has a license to make Bruce Lee merchandise, so you can’t get it with Game of Death era Bruce on the side. That is a pity, it looked really good. That said, Pretec still has the Stinky Tofu character license.

From there, we take a hard turn to the really not ordinary with the Sleep Alert Car Recorder. This device has two parts, one is a 720p video camera with some wireless capabilities, the other is basically a headband with some biometric sensors. The sensors check the driver for signs of drowsiness, most likely head movement, and make loud noises to wake you/alert you when you nod off. It also records what happens if you don’t wake up, but at that point, the pictures are probably not meant for your viewing. The system shown off at Computex was an early prototype, and there is a web page for the device, but it is still far from production. In any case, it is an interesting idea.

Last up is something rather odd called the I-Fone drive, and it looks just like an ordinary USB memory stick. This is mainly because, physically anyway, it is just an ordinary USB memory stick. The interesting part is that the provided software will sync anything you put on the I-Fone to your iPhone. If the name survives Apple’s legal team, I think it might do well on the market, Apple buyers like easy and simple.S|A